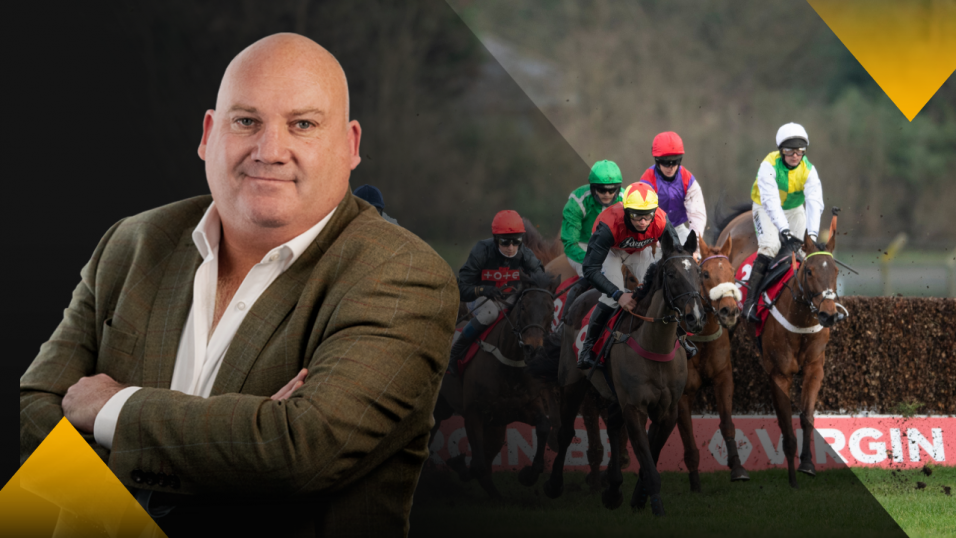 I am going to put the Dublin Racing Festival on the backburner for the moment, as there is a colossal amount going on beside that Grade 1-fest, with 13 UK races on ITV on Saturday and Sunday (though Ed Chamberlin and his terrestrial troops are showing a further seven contests from Leopardstown over the weekend).

And it will take a while to digest the Leopardstown entries, which only came out at midday on Tuesday.

As you can see from my double-entry lists below, a lot of the UK contests have the capacity to cut up markedly, and we are not dealing with big fields to start with in a number on instances.

Just six entries in Sandown’s Contenders Hurdle and the 80k Grade 1 Scilly Isles at the five-day stage is depressing. You do feel for the course and the sponsors, as it is disappointing. But it is another stark reminder that throwing money at the problem, trying to attract non-existent horses, is the stuff of nonsense.

At least, the 2m4f novices’ chase at 14:40 has attracted two serious horses in Pic D’Orhy and L’Homme Presse, rated 155 and 154 respectively, and, as a fan of the latter, I am not surprised that he has been installed as the odds-on favourite. But the Sportsbook are really siding with him, and the some, at 4/7.

Likewise, the unpenalized Song For Someone looks the obvious jolly in the Contenders Hurdle at 13:50, for all he can sometimes be a very moody sort early doors in his races, and that is maybe why the Sportsbook have bracketed him as the 13/8 joint favourite alongside Guard Your Dreams.

I will touch upon all the Saturday ITV races but I will focus mainly on only those where I think there is a punting angle, or at least a good case to be outlined.

Nearly half field have convincing claims

The 1m7f11yd handicap chase at 13.15 is normally my type of race but unfortunately I could see there was a convincing case to be made for at least six of the 14.

Impressive Market Rasen winner Tokey Dokey is obviously one of those but I was surprised the first firm up on Monday made him a 4/1 chance, if only because he has an alternative engagement at Wetherby, as well as having been raised 11lb for that wide-margin success.

But that is the general market price.

My long short-list is too extensive to go into at any significant detail here, but I would have made Frero Banbou favourite myself. On the face of it a 6lb rise for a length win at Lingfield last time looks on the harsh side, but the runner-up looks a well-handicapped improver and they did pull 18 lengths clear of an in-form, recent winner in third.

However, he isn’t a bet at the current price of 9/2. In fact, I would expect to still see most of the horses trading similarly come Thursday afternoon, with fewer runners and maybe four places on offer, too.

The problem with so many double-entered horses is that it leads all bookmakers to price very defensively at this stage.

With 27 entries in the 2m7f handicap hurdle at 14:55pm, there is an expectation these days we will see at least five places on Thursday, and you suspect each-way punters may be worth waiting until then, unless the price demands. And maybe the consistency of the horse in question.

There is no doubt in my mind that Dans Le Vent scores very highly in place-only terms in this handicap, for all its competitive nature, and it is just a matter of whether his odds are big enough to lure me in at this stage.

Unfortunately, no was the answer.

The first three firms up installed him at prices ranging from 12/1 to 16/1, but the 16s and 14s in the marketplace were quickly snapped up and he is also 8s from 12s with Sportsbook, too.

He did us a favour when winning over an extended 3m on good ground at Haydock off a 7lb lower mark than this in November and since then he has performed with great credit.

The handicapper could have reasonably upped him again after his fourth in the Grade 2 Relkeel (a race in which Isobel Williams couldn’t claim her 5lb) and his fifth in the Lanzarote last time can be upgraded again as he did best of those who came from well off the pace.

It wasn’t an optimal ride, let’s be honest, and nor was Beauport’s at Newbury last time either, and he is a big runner too at 7s, here, though his record suggests it wants it much softer than it looks like being.

There is still some upside to Dans Le Vent’s handicap mark, especially with the step back up in trip, after his last two starts over 2m4f and 2m5f, but I wouldn’t back him at the current 8s myself (or indeed 12/1), so I can’t recommend him at this stage.

You can see below which horses are double-entered, and I am not sure how many of the Irish contingent will rock up, but I think there is a fair chance that a maximum field of 18 will go to post and we will get very competitive odds and place terms come the weekend.

Watch and wait, I feel.

Linelee King is arguably the most interesting, as he was left unchanged on a mark of 128 after his third at Ayr last time, which was surprising given he would have won had he not made a very bad mistake four out, and the step up from 2m4f to 3m once again looks a fair move for a horse with form over the latter.

On the face of it, the 7/1 looks big until you dig a bit deeper

Most obviously, Olly Murphy is keeping his options open on the trip front as he also has him in over 2m3f at Wetherby on Saturday, so he is clearly untippable from an ante-post point of view, and the trainer continues to go through a lean spell with Brewin’upastorm, at 13/8 in a three-runner race, his only recent winner.

I should mention the Sandown ground actually.

It is good with a bit of cut on both courses, and it appears we could get modest, selective watering (details of the amounts would be welcomed after Doncaster’s seeming over-exuberance with the watering can last week, which saw Kapcorse, an entry here, withdrawn just before the race on account of the ground) with no rain of any note forecast.

It’s a decent handicap and I thought the 10s about Deise Aba was fair back on his favourite track, but dangers abound in the shape of the aforementioned Linelee King and Kapcorse, not to mention a host of others.

Real Steel, 14/1 with the Sportsbook, was well backed for a Kempton race over Christmas, only to be taken out late because of the softening ground. We know he is thrown in on his best Irish form off a mark of just 145.

But the way Paul Nicholls’ horses ran on Saturday would have to concern you, and he also had no winners from four runners in small fields at Hereford on Monday (at odds of 5/4, 11/8 and 2/1 twice). This could be a stepping stone for an even bigger handicap pot for Real Steel, having his first start since October.

I filed this under “too difficult” once again. At this stage anyway, even though four of the 14 were quickly dismissed because they are double-entered.

Two to back at Musselburgh

The Sportsbook have also priced up all three of the ITV races from Musselburgh (and one from Wetherby, where nothing appeals in a cracking novices’ chase, headed by Ahoy Senor at a prohibitive 4/7).

Glen Forsa is handicapped to win again, especially now he looks like sensibly being dropped in trip from 3m, but a potential bet in the 2m6f handicap chase at 14:05 was scuppered as he is also entered at Wetherby on Saturday.

The 15-runner Scottish County Handicap Hurdle at 14:40 has the most attractive ante-post betting shape of all of Saturday’s ITV races, because it really has the potential to cut up.

Lively Citizen, pulled up at Cheltenham on Saturday due a to a slipped saddle, is declared overnight at Leicester on Wednesday and how many of the five Irish entries come over is anyone’s guess (Anna Bunina, undone by the ground at Doncaster, and Saint Felicien would be turning out again very quickly after runs last weekend, as would Glory And Honour).

In addition, four UK-based horses are doubly-declared, and I was gutted Voix Du Reve remains one – I had the case all argued (and written) out for him at 14/1 – as he was confirmed for Kelso on Thursday at 10am on Tuesday, which stopped me dead in my tracks and a hasty re-write.

I can’t believe he isn’t going to Musselburgh, as he is 10lb lower than when second in the race last year and showed clear signs of a revival over 2m4f here, but there you go. I obviously can’t tip him now.

Instead, I am going to suggest a revised two-pronged attack, with Diocletian and Fiveandtwenty at 12s and 8s each way, respectively.

For what it is worth, both are already jocked up and the pair are weighted to go well.

Fiveandtwenty has been dropped 4lb for his run here behind Tommy’s Oscar on New Year’s Day and that could be generous, as he shaped well for a long way there and may have needed that run, his first for two months and his first after a wind op.

He rattled up a quick hat-trick over course and distance, including at this meeting, on soft ground last season – it is currently good (good to soft) in places, but one forecast suggests 14mm on Saturday alone – and this front-runner may well get an uncontested lead looking at the likely runners.

He is very well treated once again off 124. It was hugely annoying to see the 12s about him disappear just before I filed at 11am on Tuesday, but I had written he was a bet at 8s and bigger, so 8/1 each way is the recommendation.

Diocletian is perhaps less obvious, but he has joined Nick Alexander, a trainer I have a lot of time for, from Andrew Balding on a fair mark (also on 124), especially when you consider he was rated 99 on the Flat after an Old Borough Cup third at Haydock in 2020.

He is clearly unexposed over hurdles after just the four starts, and the local trainer (he is 43.2 miles away according to the AA) will hopefully have him spot on here after a long break for an owner that likes to have runners and winners at this course. The horse is ground-versatile, too

The 11-runner Edinburgh National at 15:45 could cut up too, but I will leave it there. I have already written far too much already.

Double entered horses in Saturday’s ITV races in the UK

Musselburgh 15:10 (not on ITV, but I did it by mistake so here you are!): Blooriediotcom, Gemologist, Idilico, Monsieur Pom Pom, Near Kettering, Salt Market, Smart Lass