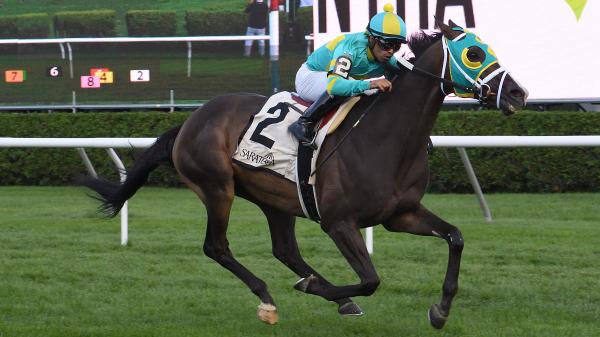 Three Diamonds may have as many as three horses entered in the $1 million Pegasus World Cup Turf Invitational when post positions are drawn on Tuesday. All are trained by Mike Maker.

Aging warrior Cross Border, an 8-year-old New York-bred, leads the trio and will try to improve upon last year’s third-place Turf finish. He is a multiple graded stakes winner that has banked more than $1 million in earnings.

Field Pass, a 5-year-old Maryland-bred, also appears to be formidable. He comes off a victory in the Nov. 27 Seabiscuit Handicap at Del Mar, his fifth graded-stakes triumph at as many tracks. A top-three finish would elevate him to millionaire status.

The connections also hope for an opportunity to run Atone, a 5-year-old gelding bred in Kentucky who finished second to Pegasus Turf contender Doswell in the recent Fort Lauderdale Stakes at Gulfstream. He has steadily improved under Maker’s care.

Three Diamonds Farm was established by Kirk Wycoff and his wife, Debra, in 2008. The name is a salute to their three children. Kirk serves as managing partner of the Philadelphia-based private equity firm Patriot Financial Partners. Jordan Wycoff manages the racing operation. They have achieved considerable success on turf, highlighted by 30-1 Fire At Will’s upset victory in the 2020 Breeders’ Cup Juvenile Turf Presented by Coolmore America.

PEDULLA: Why did you and your wife decide to get involved as owners?

WYCOFF: My wife and I grew up riding and met through horses and wanted to stay involved with horses. I love the horse racing business, so that’s why we got involved.

PEDULLA: Do you approach it with a certain game plan?

WYCOFF: Our strategy is, unfortunately, becoming more well known now. We focus on turf racing. We focus on turf pedigrees. We focus on buying and claiming horses that we can re-purpose to doing something they haven’t done before – dirt to turf, short to long. Just find those opportunities because we are not a high-budget operation in terms of buying very expensive yearlings and 2-year-olds to run on dirt. We love turf racing. We know it’s very competitive at the end of every race. But we also found we could race in many, many big races on Saturday and Sunday with a limited budget.

PEDULLA: It sure looks as though Mike Maker has become an important element in that.

WYCOFF: There is a rumor that he knows something about training horses on turf. He’s done a fabulous job.

PEDULLA: What is it like to have your son, Jordan, as managing partner? Do the two of you clash much?

WYCOFF: We are brutally honest with each other. He is very astute on Ragozins and Thoro-Graphs and where horses have the best chance to win a race, particularly a big race. I’m more intuitive about it in terms of watching how the race flows. We clash – not clash, but disagree — on where the next best race is, for example.

WYCOFF: One hundred percent. We thought he should have been second and had a chance to win. He got bumped around pretty good at the start, and we wanted him to be a bit closer to the pace. Obviously, Colonel Liam ran a great race. But we thought he was capable of winning that race.

PEDULLA: Can he redeem himself this year?

WYCOFF: A lot of this race, particularly shortening up to a mile and an eighth, is going to come down to post position and where the horses end up after the break and the pace. We don’t know if there will be much pace in this race yet. I suspect there won’t be. But none of our horses would be here if we didn’t think we had a chance to win.

PEDULLA: Field Pass looks as though he is getting better and better.

WYCOFF: Mike Maker tells me the last three months he’s really become a better older horse. He’s won a graded stakes at a mile and an eighth. That’s his distance limitation. That’s where Cross Border starts to get good, from a mile and an eighth to a mile and a half. [Field Pass] is getting better and better. Based on the numbers, he fits in the race.

PEDULLA: Are you hoping Atone gets in?

WYCOFF: Look, Atone’s performance in the Fort Lauderdale was no surprise to us. He ran about 56 feet farther than the winner, who was loose on the lead. He’s capable of winning this race if he gets in.

PEDULLA: How important is the Pegasus on the racing calendar?

WYCOFF: We like the Pegasus. We think it’s a very prestigious race. We don’t keep a lot of our turf horses in training in the winter, but in some cases we decided to point to this race. Which one has the best chance would depend on the post draw and the flow of the race.

PEDULLA: What led you to purchase a farm in Lexington last year?

WYCOFF: We love the racehorses and we love Lexington. My wife and I had not lived on a farm for about 30 years. We like living where the horses are and seeing them every day. What it does for us is it gives us the ability to handle our turf horses when they get a break in the winter. We typically are raising somewhere between 15 and 20 foals and yearlings by English Channel and Kitten’s Joy, so it lowers our cost to get those horses to the races. Everyone knows that costs have gone up dramatically, from the acquisition cost to training.

PEDULLA: How big is your operation?

WYCKOFF: We do have eight broodmares. My wife is not fond of parting with fillies. But we are not in the broodmare business. We are not buying broodmares.

PEDULLA: Lastly, what advice would you give to a potential owner?

WYCKOFF: Two things, I think. Decide what your budget is and where you want to win races. The second thing is, new owners are usually surprised and concerned about the amount and size of the training and shipping and veterinary bills. That is a cost of having horses run well. You need them well taken care of. Whatever level you want to race at, you need to understand that care of your horse, by your trainer, by your farm, is the most important part of success.