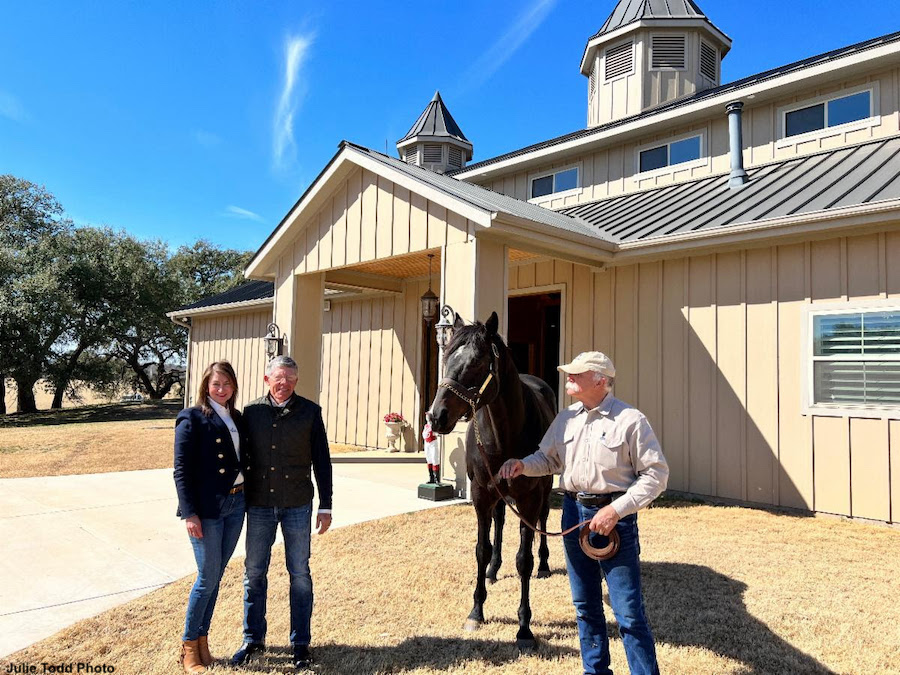 You can look to horse racing for an example of something that works. Yes, you’re right: It is amazing. You probably don’t want to be reminded of the ubiquitous dysfunction in these troubling days, but the next time it overwhelms you, the next time it gives you a headache, just think of Texas horse racing.

Here’s something that works, something that would even put a smile on the face of Colonel “Hannibal” Smith, the leader of the A-Team in the popular 1980s television show, who at least once every episode would say, “I love it when a plan comes together.”

Well, the Texas plan is coming together. The impressive evidence sits at the confluence of the North and South Paluxy Rivers in Bluff Dale, an hour southwest of Fort Worth. Together they form the Paluxy, which flows for 29 miles southward before conjoining with the Brazos. Mark Collinsworth can tell you all about the wagon trains that rolled through this area heading west in pursuit of the American dream, and somehow that seems richly appropriate, for that’s why he and his wife, Lori, are here, too. They’re pursuing their dream: Forks of the Paluxy, a farm dedicated to breeding racehorses. They’ve built — and are building still — their farm around a dream, a Grade 1 stallion named Mr Speaker, and Texas’ Horse Industry Escrow Account.

In 2019, through House Bill 2463, Texas lawmakers created the Horse Industry Escrow Account. Funded from revenue derived from taxes on horse-related products, the HIEA was created to support racing and breeding, as well as various programs and grants; in other words, it was intended to help preserve and promote the sport, the industry, the heritage, and the horse culture. And that was when Lori and Mark Collinsworth decided to pursue their dream — when the bill passed and Gov. Greg Abbott signed it into law.

Don’t you love it when a plan comes together?

At the time, the Collinsworths had a farm in Midland, and Mark worked in the industrial real estate business. For years they had enjoyed going to the races together, and in 2012 they bought their first horse, a filly they named Strike Pleasure, for $5,200, out of the Texas yearling sale. Two years later, she gave them their first victory. She went on to win five more times and earn $116,000; so you could say Strike Pleasure was instrumental in the formation of their dream.

They owned only a few, but they continued to win races — with horses such as Lawyer Gabe, Lass Channel, Mad Dog Matters, Joyable, Paluxy Princess, South Texas Lingo, Quinn Murphy, and Hanalei’s Houdini. The Collinsworths over the years raced a few horses in Texas, but because of purses, most of their horses raced elsewhere, from New York to California, with trainers such as Dallas Keen, Karen Jacks, Carlos Martin, Joe Orseno, and Bret Calhoun. And the dream kept expanding, this dream to have a stallion and a farm and raise racehorses. When their son, Richmond, settled in Dallas and their daughter, Alana, went to Southern Methodist University, the Collinsworths knew where they wanted their dream to be realized.

And so their Paluxy, a $45,000 yearling by Brody’s Cause, has won consecutive races at Sam Houston. And Mr Speaker, purchased and relocated from Lane’s End in Kentucky, has taken up residence at Forks of the Paluxy. Standing for $5,000, he’s arguably the most accomplished stallion in the state. In fact, since he’s not only a Grade 1 winner himself but the sire of a Grade 1 winner as well, he’s probably the most accomplished stallion ever to stand in Texas. He raced with the best of his generation and won major stakes on turf and dirt. And he’s here in Texas as a direct consequence of the legislation passed in 2019.

You have to love it when a plan comes together.

As a 2-year-old, Mr Speaker won the Dania Beach Stakes at Gulfstream Park; at three, he won the Lexington at Keeneland and the Belmont Derby in New York; and at four, he won the Commonwealth Cup at Laurel — all graded stakes. Trained by “Shug” McGaughey and racing in the distinctive silks of the famed Phipps Stable, Mr Speaker earned $1,247,544 in his career. Uncommonly handsome and obviously athletic, he looks like a millionaire. He looks, in other words, like the horse he was born to be: He’s by Pulpit, a son of A.P. Indy who won the Fountain of Youth and Blue Grass before finishing fourth in the Kentucky Derby, and Mr Speaker is a grandson of the incomparable Personal Ensign, who never lost a race in her Hall of Fame career.

He also has been successful in his second career as a stallion. Among the stakes winners Mr Speaker has sired is Speech, winner of the Grade 1 Ashland at Keeneland who ran third in the Kentucky Oaks. From his four crops, he has sired 16 black type stakes horses, including Ironstone, Speaking, Miss Hard Knocks, and Three Technique.

Mr Speaker is alone for the moment in the stallion barn, which has been built on a Kentucky model. Admiring visitors come by and stare into the sumptuously large stall at Mr Speaker as James Weatherford, the farm manager, watches. Nothing gets by either of them.

In the middle of the property, at the highest point, the Collingsworths have built a large house, its upper floor adorned by equine art, dominates. Or seems to, for in truth this place was built for Mr Speaker — and for grandchildren, of course, who love horses and require plenty of space.

You can count on it: Excellence will emerge from the Forks of the Paluxy — excellent and talented racehorses, bred and born in Texas to excel. Yes, this plan has come together beautifully.

This story was originally written by veteran turf journalist Gary West for TXRacehorse.com, and was reprinted with permission.