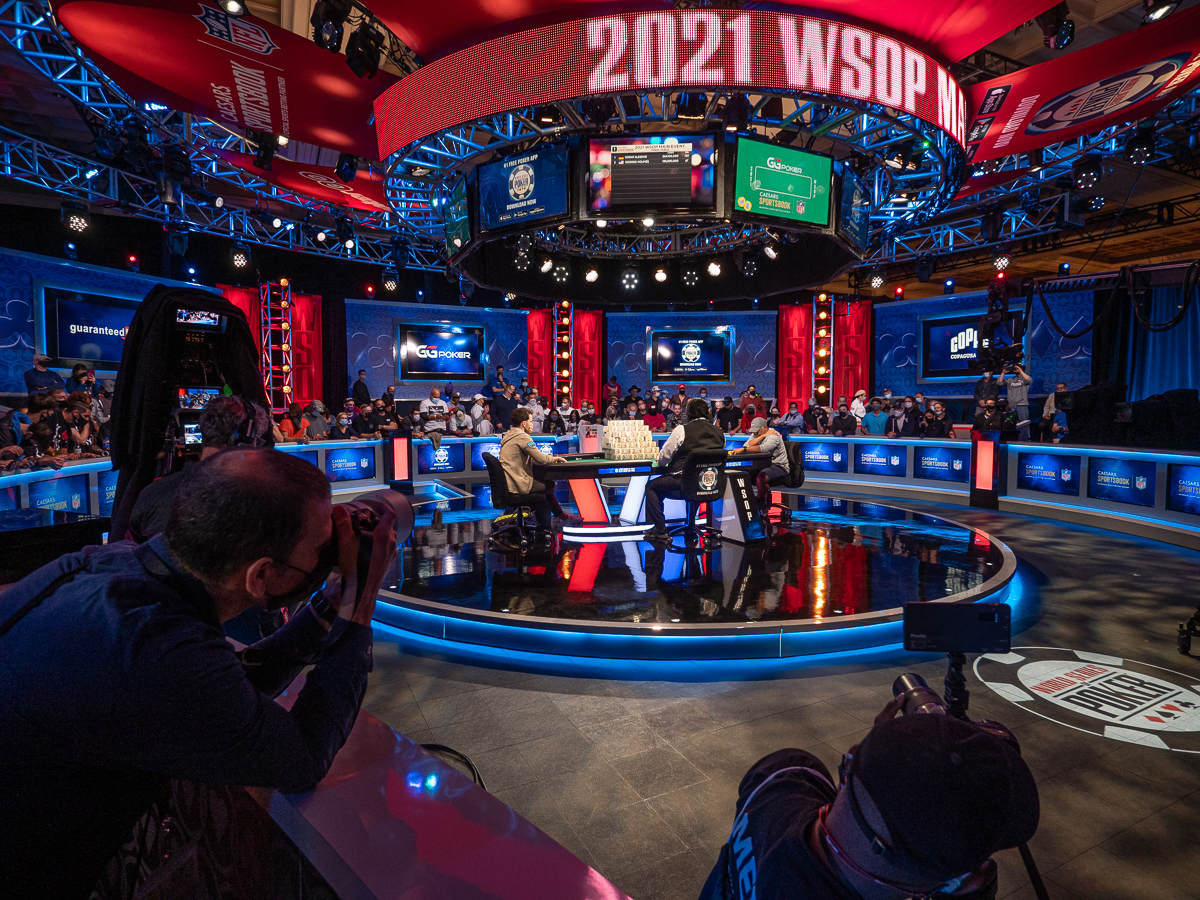 The final table of the World Series of Poker Main Event. Every poker players dream. The ultimate accomplishment. With millions of dollars at stake and the chance to be a part of history. The event started with 6,650 players, and after seven days of play, only three remained to play it out on on the big stage.

Aldemir started the day as chip leader, a position he had enjoyed for almost all of the final three tables. His incredible 165 big blind stack put him way out in front of his opponents with more than two-thirds of the chips in play. It would be a lot of work for either of them to catch him, but they were both ready for the task and had stacks deep enough to put up a real fight.

Oliver and Holmes got to work quickly, chipping away a bit at Aldemir’s stack and playing pots with each other. Neither seemed content to wait and hope for the other to go broke. Holmes seemed to be getting the best of it, with relentless aggression getting folds from Oliver a number of times in big pots. Then, a few hands after a break, with blinds and one and two million, Oliver shoved all in for 17 big blinds from the small blind. Holmes went into the tank for just over a minute and then made the call.

Oliver tabled Ac8d and Holmes showed QsJs. The race was on, with Oliver in the lead, but a jack on the turn sent Oliver to the rail and the battle was now heads up. While Holmes had chipped up significantly, Aldemir still had him out chipped nearly two to one. 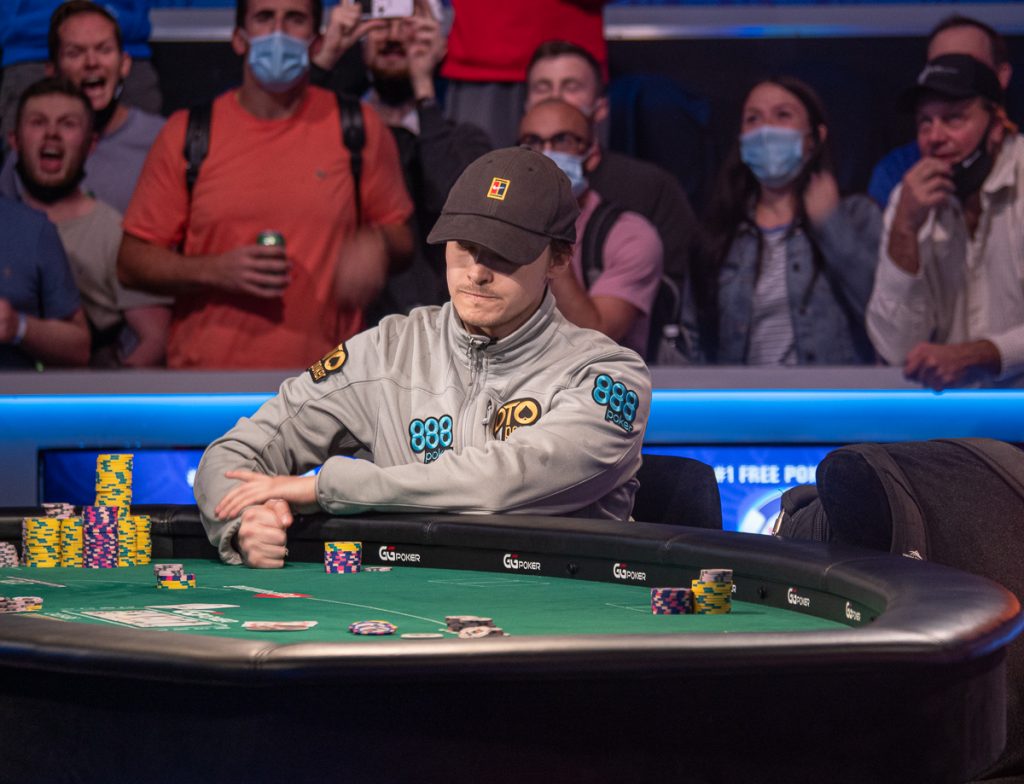 Bring in the cash

A short break was called before heads up action began so that the tournament staff and security guards could bring in the enormous pile of cash and the impressive main event bracelet. The cash was stacked on the table and the bracelet placed on it. After some discussion about how the bundles of bills should be stacked and exactly where the bracelet should be placed, the media was allowed in to take photos of the prize money. Bundles of $50,000 each were piled high, with nearly 140 pounds of hundred dollar bills unloaded from a locked cart surrounded by security. 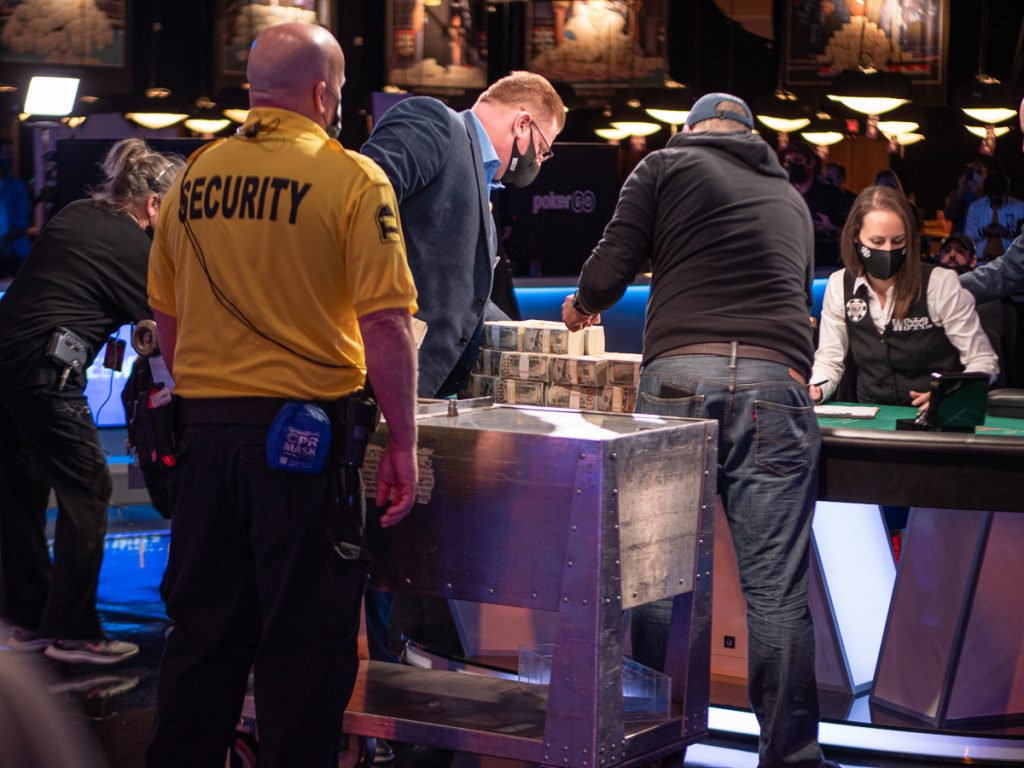 Stacking more cash than most people will earn in a lifetime. (Image: Chris Wallace/Cards Chat)

Each player had a large contingent on the rail, singing songs and cheering, and while the two players mostly ignored the cash and the sparkling bracelet, the cheering sections grew louder and more raucous at the start of the heads up battle. The Germans cheering from behind Aldemir sang songs and cheered, wearing shirts KORAY on them, the O fashioned into a sniper’s reticle. The Cheering section in the middle for Holmes had shirts that read “Show Em The Lights” a reference to pinning an opponent in professional wrestling, and they cheered loudly anytime Holmes won a pot. 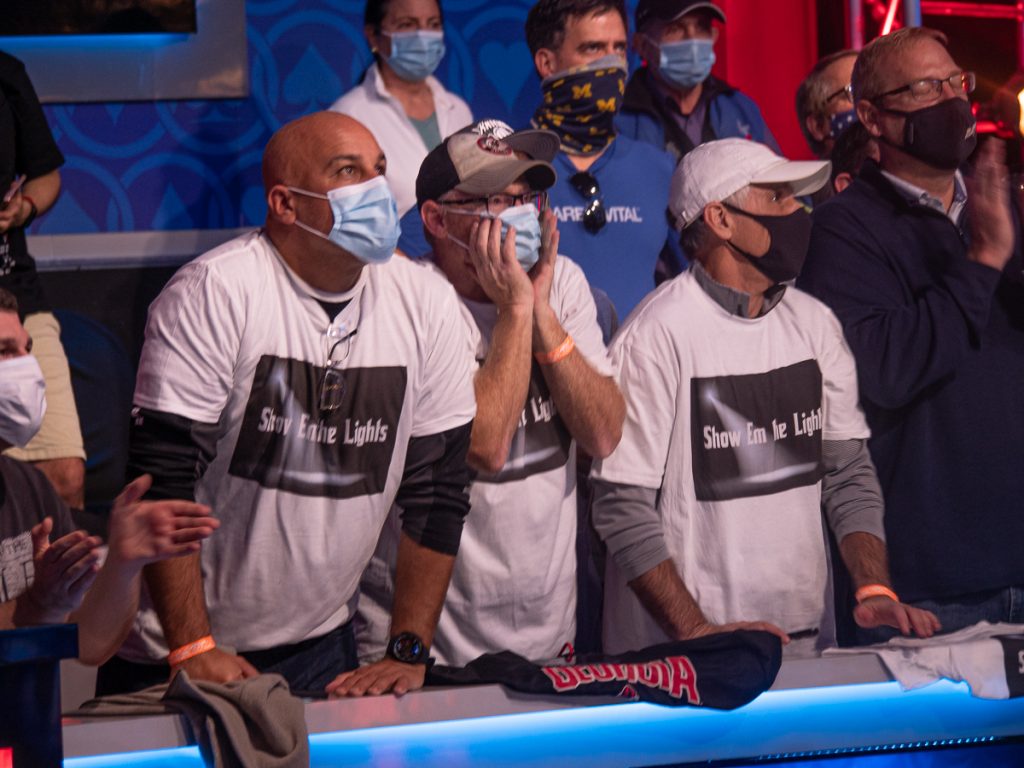 At least a dozen people cheered from the rail for each player. (Image: Chris Wallace/Cards Chat)

Holmes kept up his relentless aggression, playing fearless poker against the much more seasoned pro in Aldemir. Holmes had only one previous cash, a 213th place finish in the main event in 2019, while Aledmir had twelve million dollars in tournament winnings, but it didn’t seem to bother the home game champ as he attacked Aledmir hand after hand.

The aggression from the American paid off, as did a few key hands, and an hour into heads up play Holmes had taken the chip lead. But the German was calm and cool all night, and appeared undaunted. He had made a bad call with Ace-Jack earlier in the day but chants of “He’s coming for your stack, nice call with Ace-Jack” from Holmes’ rail didn’t faze him. 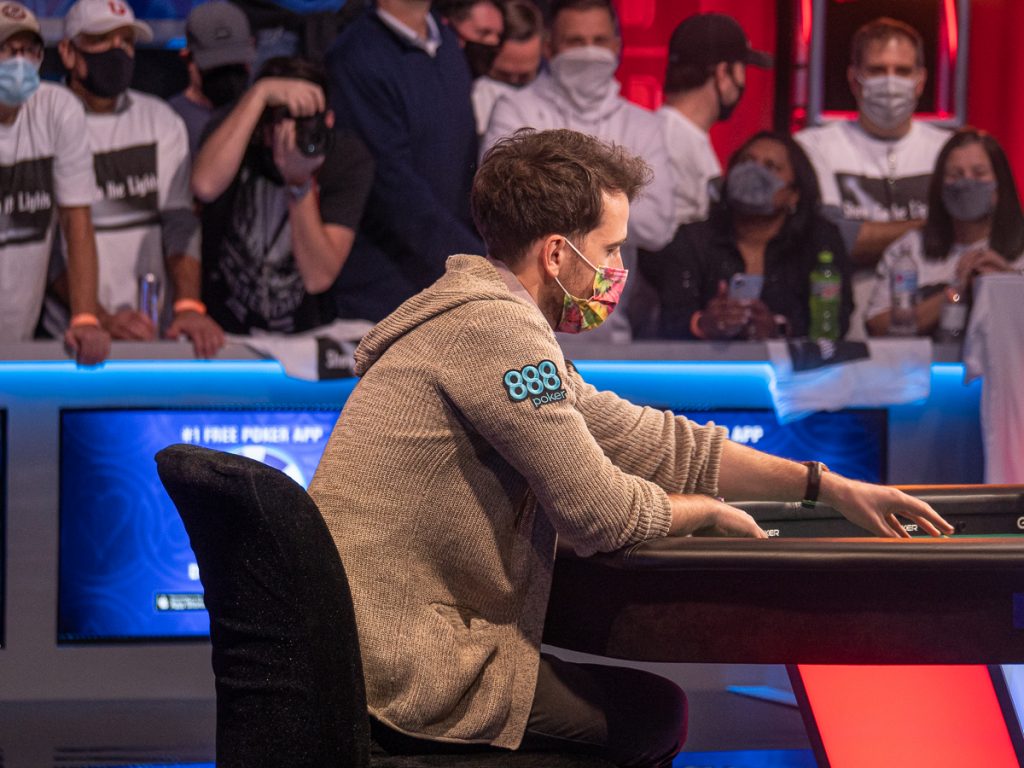 Both players get all-in on an ace-high board

Not long into the heads up battle, with stacks very close to even, a huge pot played out on a board of 9JAK7. Both players went all-in on the river, each believing they had probably just won the main event. Both players tabled the nuts with a broadway straight and looked disappointed to see that they had won nothing and had to get back to work. 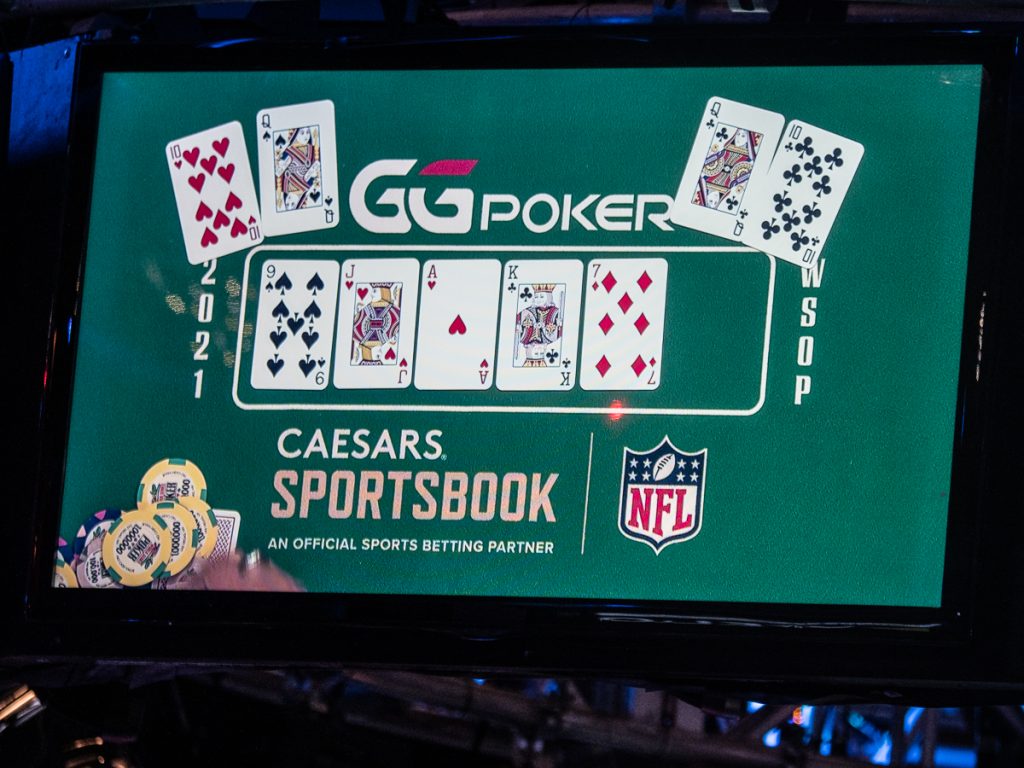 Sometimes you think you have won the main event and all you won is your blind back. (Image: Chris Wallace/Cards Chat) 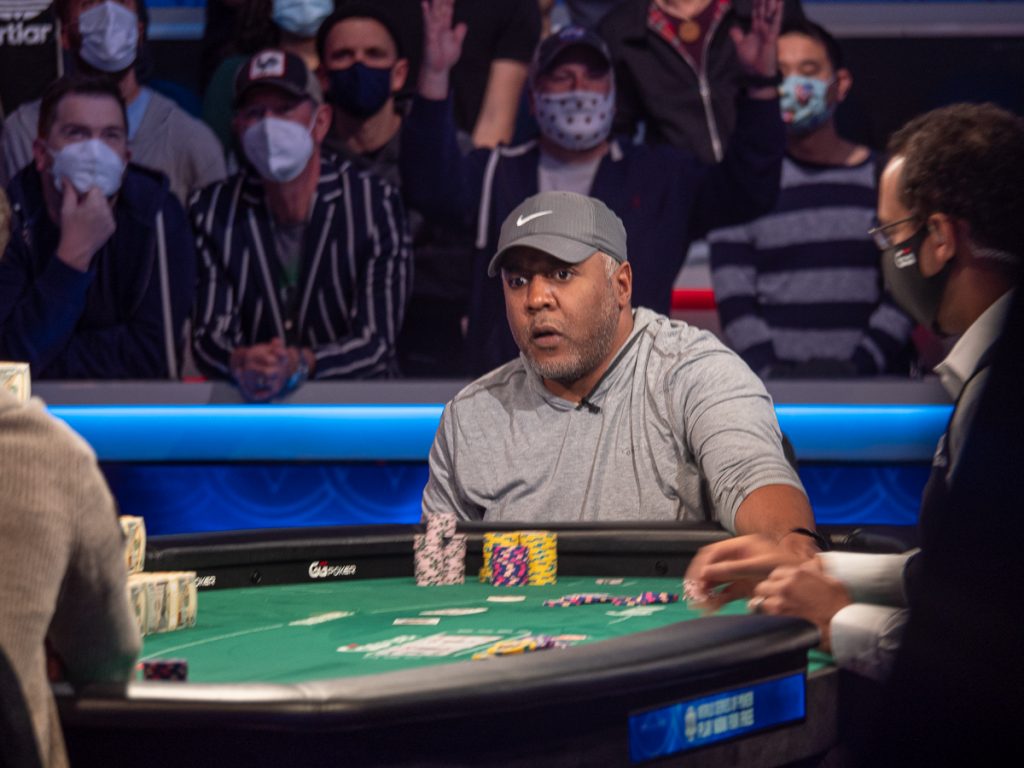 Holmes was shocked to see that his opponent held the same hand. (Image: Chris Wallace/Cards Chat)

The German’s experience began to pay off as he picked off a few bluffs and won a few pots at showdown, clawing the chip lead back from Holmes. After hours of play, the two still had healthy stacks with no end in sight. The media and camera crews talked about the potential of the heads up match running well into the morning hours. 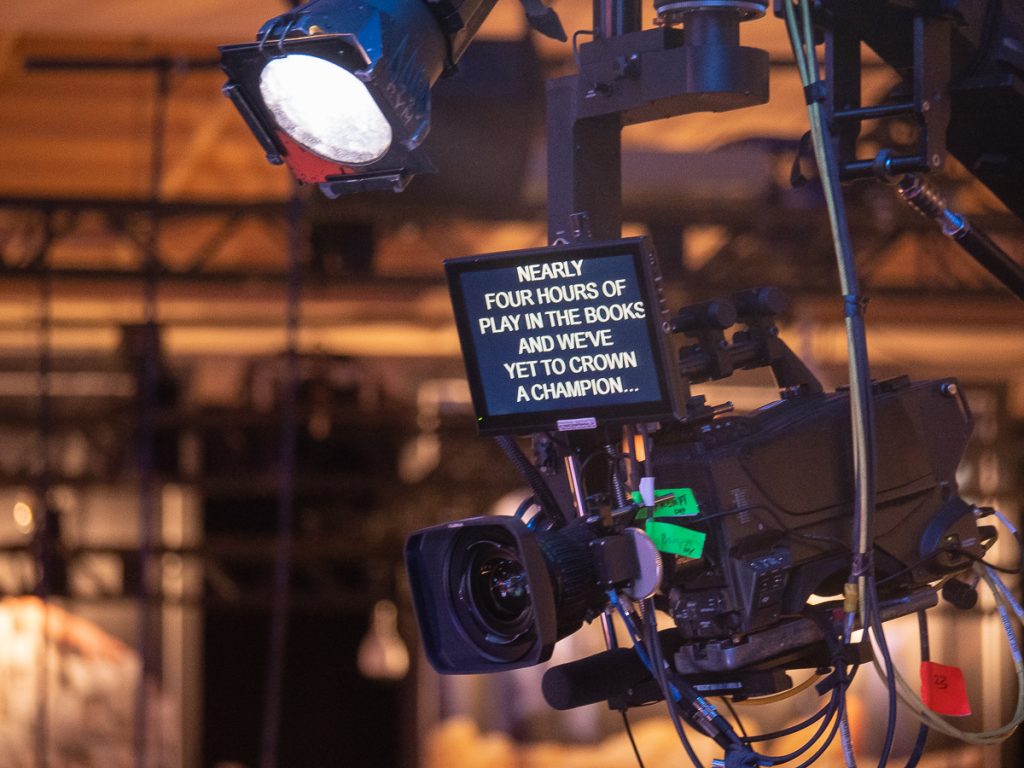 The teleprompter tells the tale of a long heads up battle. (Image: Chris Wallace/Cards Chat)

Just as we started to fear that we could be at The Rio until the sun came up, all the chips went in. Holmes raised from the button with KcQs and Aldemir called with Td7d. The flop of Th7s2h gave Aldemir top two pair. He checked and then raised Holmes bet. The call from the home game champ created a sizeable pot, and the Ks on the turn gave Holmes top pair. Aldemir bet big and Holmes called yet again. When the 9c fell on the river, Aldemir checked and Holmes went all-in for more a bit more than the size of the pot.

After a few minutes in the tank, the German made the call and showed the winning hand. A quick count confirmed that he had Holmes out chipped and he ran to his rail to celebrate his victory. 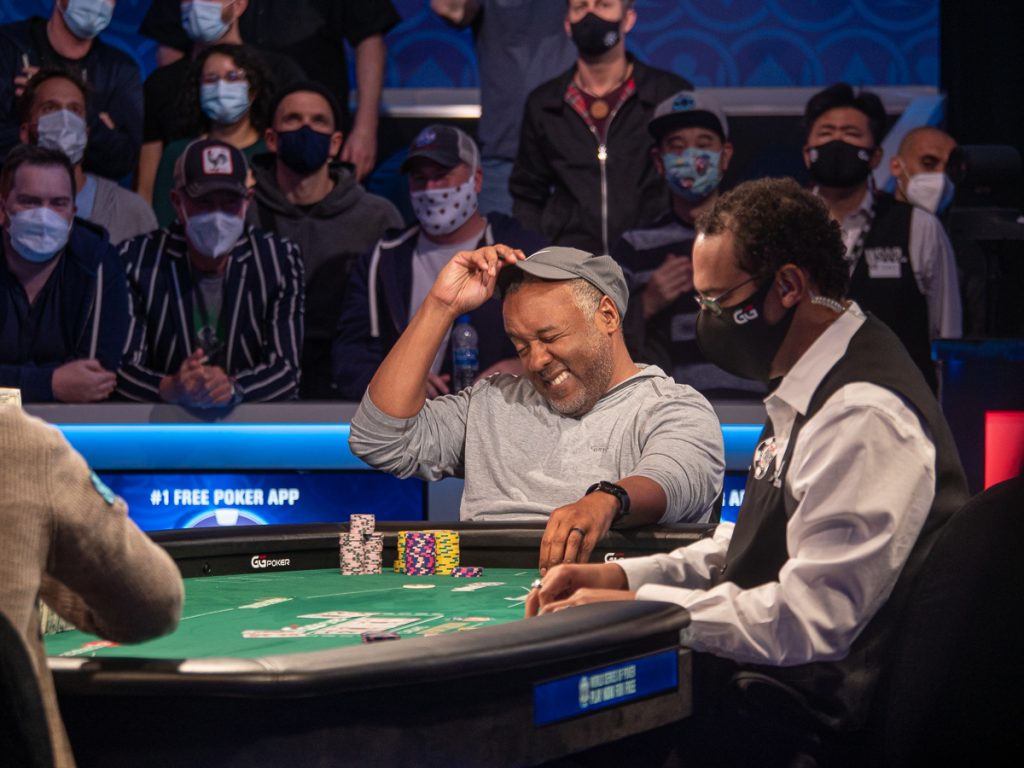 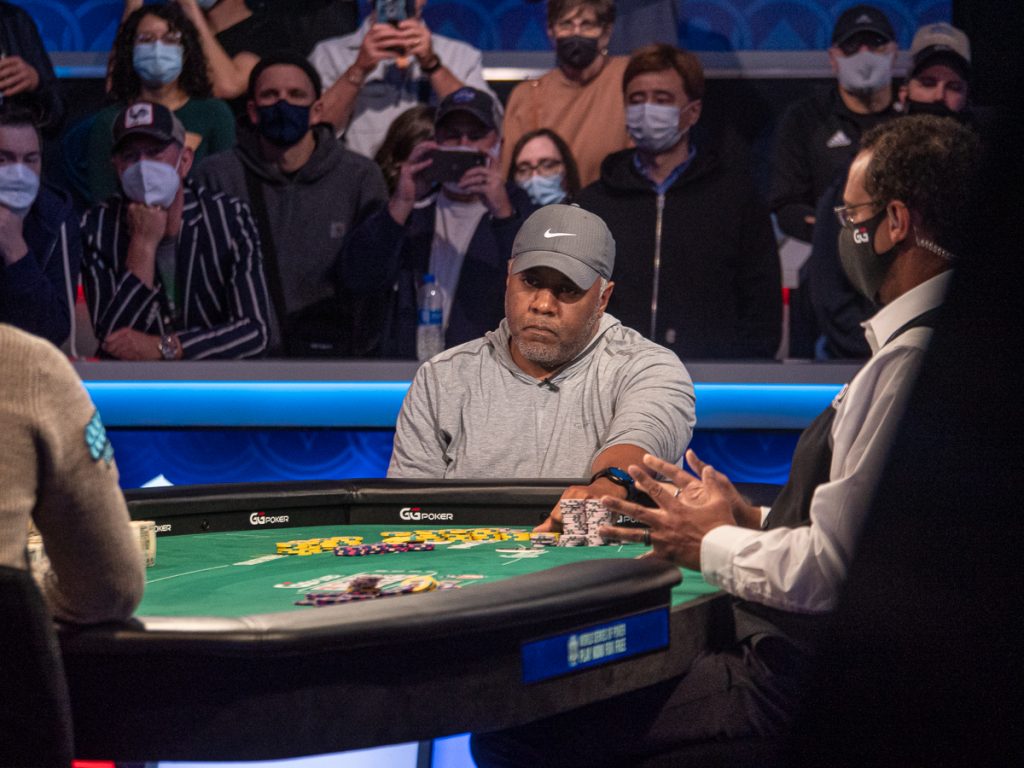 The rail behind Aldemir cheered as cameras rushed in and Jeff Platt got ready to interview the two players behind the pile of cash. Holmes appeared in good spirits after a few moments and Aldemir showed some emotion for the first time all day as he spoke to Platt and posed for photos with the bracelet. 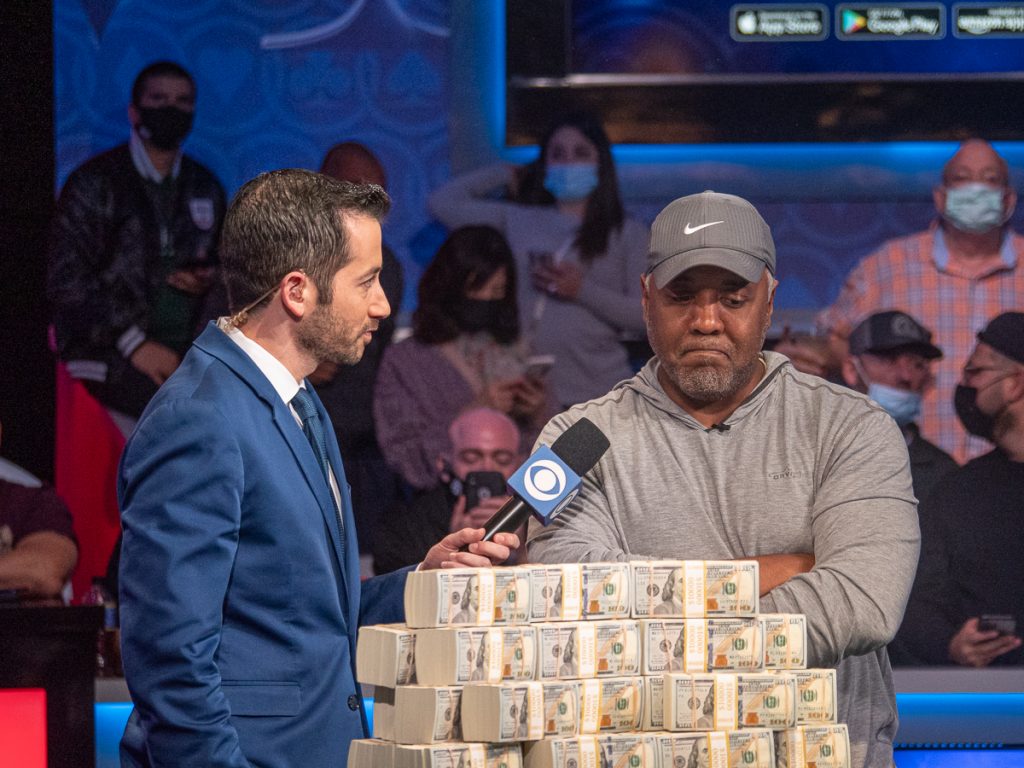 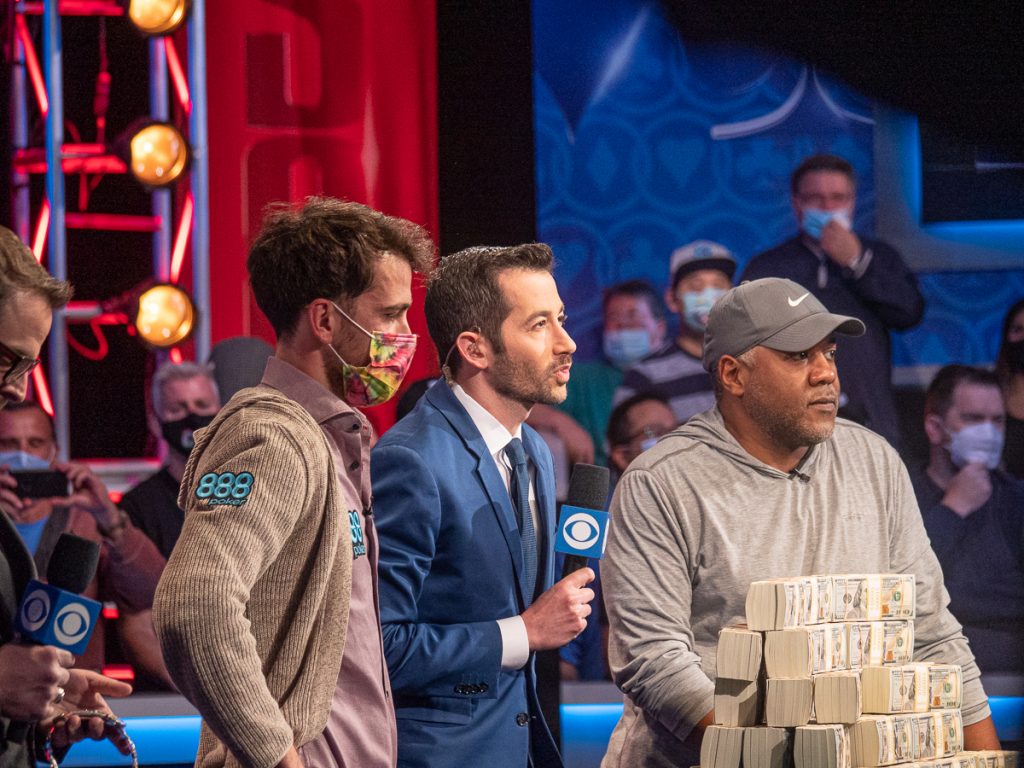 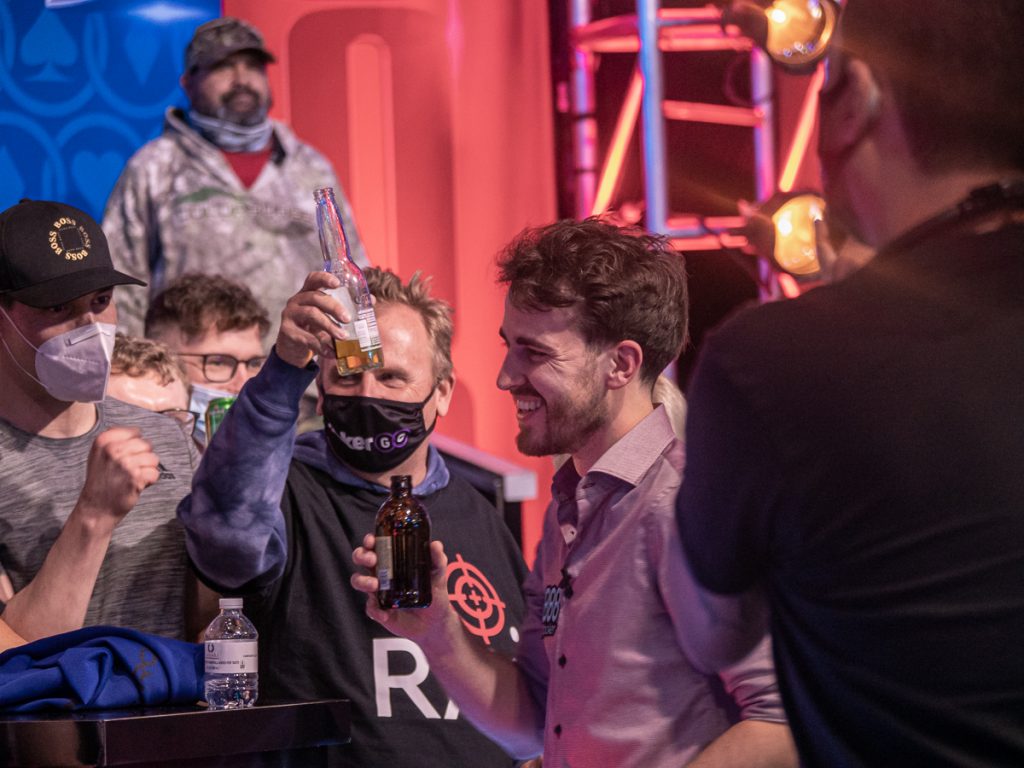 Having a drink to celebrate. (Image: Chris Wallace/Cards Chat) 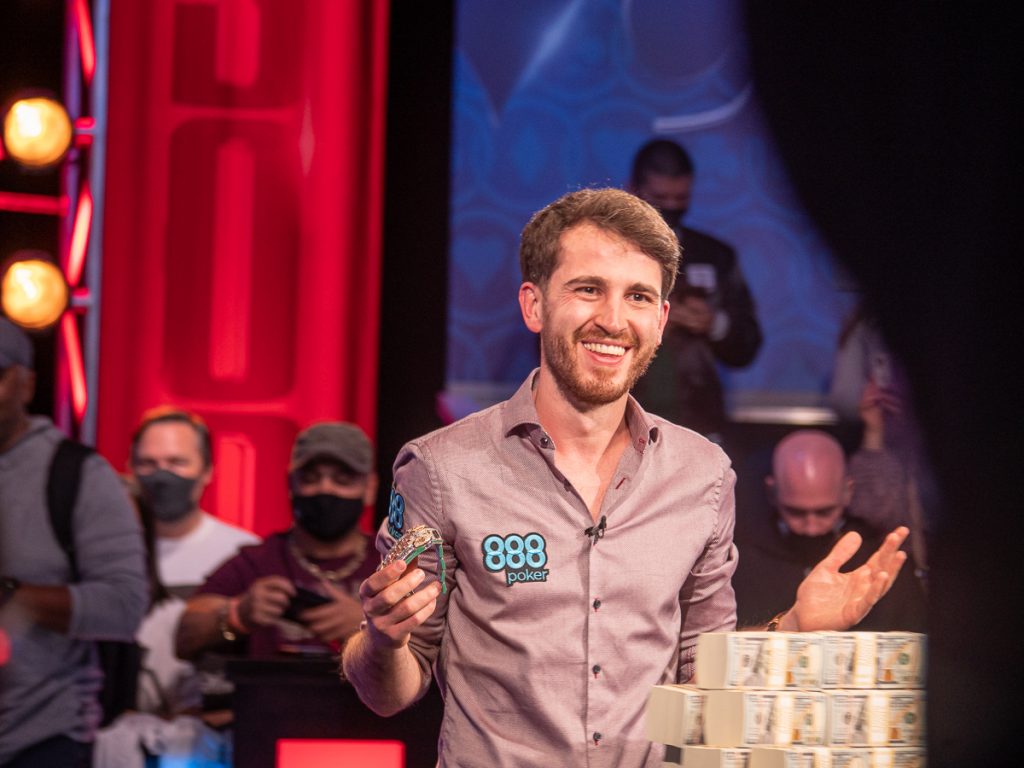 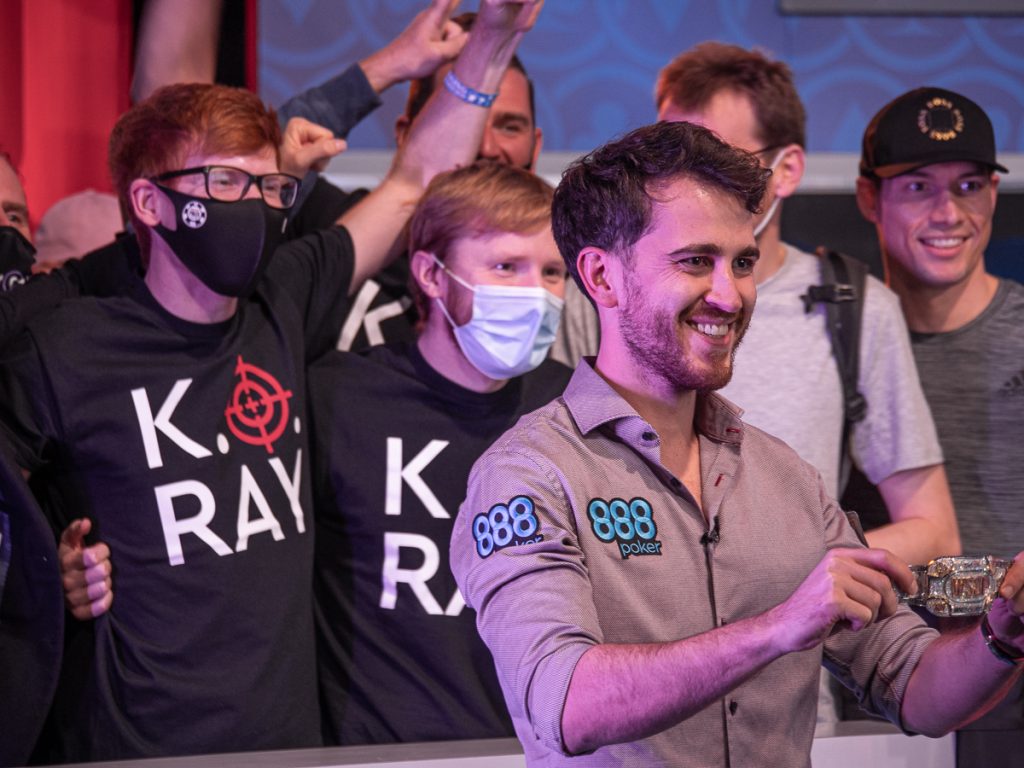 It’s like we all won. I’m keeping all the cash though. (Image: Chris Wallace/Cards Chat) 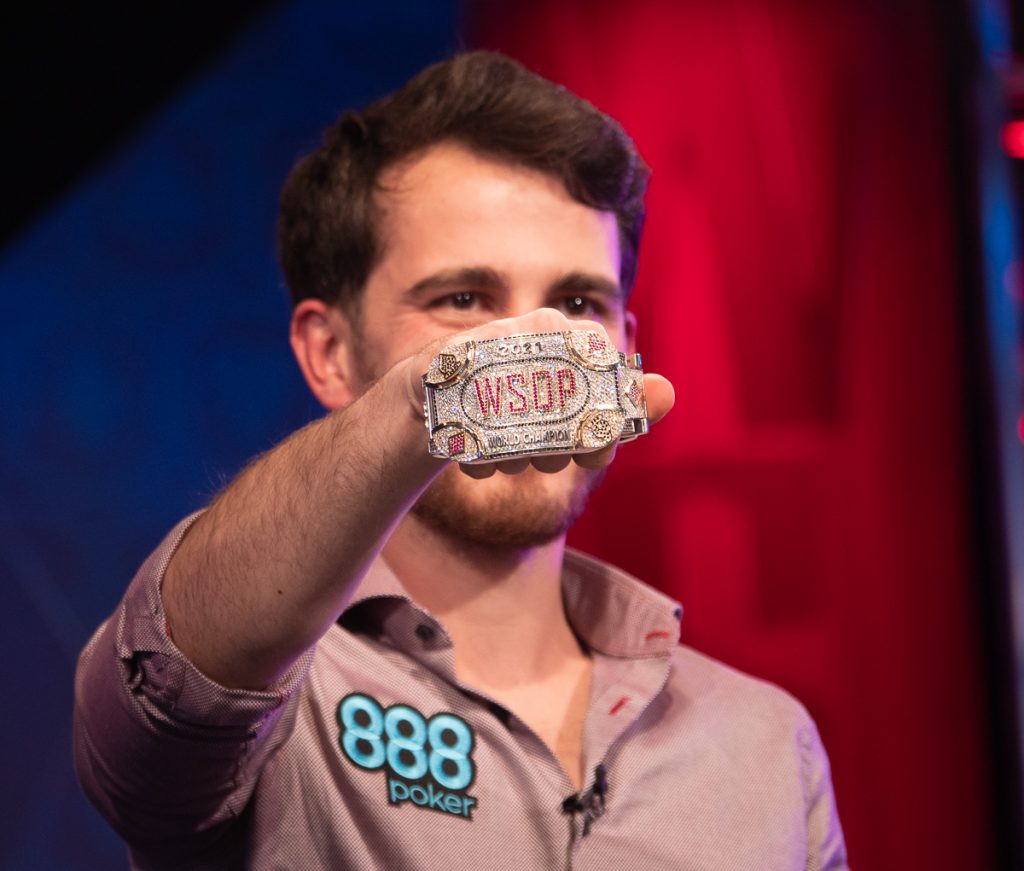 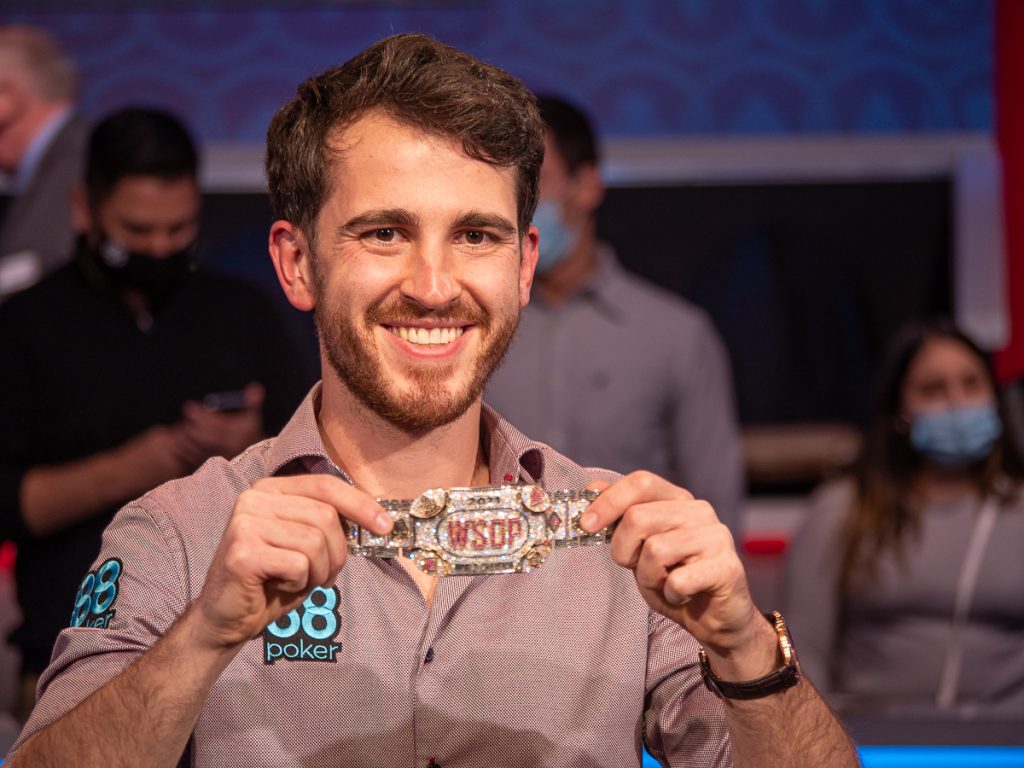 No need to ask him to smile, he couldn’t help it. (Image: Chris Wallace/Cards Chat) 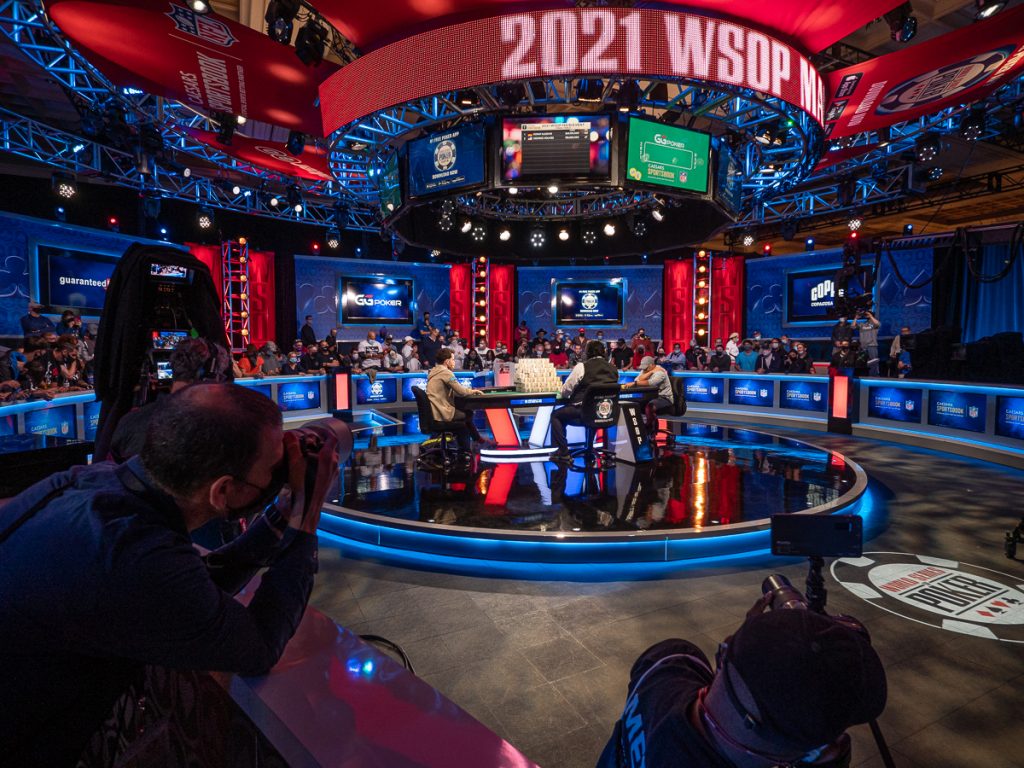 They call it the Thunder Dome. (Image: Chris Wallace/Cards Chat)