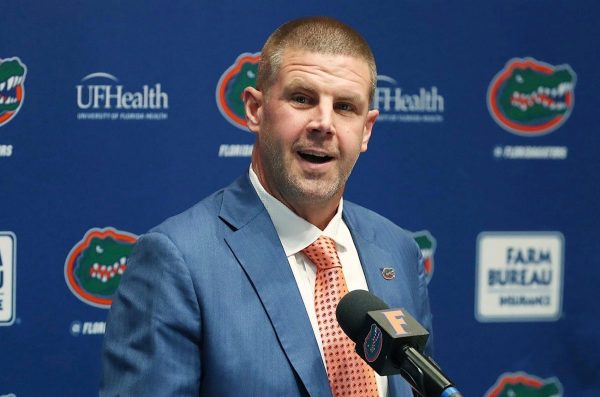 There will be 28 new FBS head coaches roaming the sidelines when the 2022 college football season kicks off in late August. Fourteen of those 28 programs were bowl-eligible in 2021. Several programs got rid of their former coach because of poor performance. Others were left needing to fill a slot because of a coach taking a “better” job. Half of the new FBS coaches in 2022 will be first-time head coaches. Will they be successful in Year 1? Which of the 28, if any, will have the most success? Here’s a look at the best of the new FBS head coaches in 2022.

Napier has a 40-12 career record as an FBS head coach. He worked wonders at Louisiana where his 2021 team won the Sun Belt Conference and finished 13-1. It’s not like Napier hasn’t been around elite college football either. He spent time at Clemson and at Alabama.

Napier has a lot to work with at Florida. Last year, the Gators did lose seven games but four of those losses were by a touchdown or less. Napier got a ton of quality in-state recruits and Anthony Richardson returns at quarterback to run Napier’s ground-heavy spread offense.

The Gators should be better than the 6-7 mark they put up last year. The difficulty is the schedule. They will face Tennessee, Texas A&M, Florida State, and Georgia this season. They also open up against Utah and then face an up-and-coming Kentucky. Napier should still produce a winning season in Gainesville.

The Fresno State football community recognizes Tedford’s name. This is his second stint in the valley. He went 26-14 with two bowl wins from 2017-19. His 2017 and ’18 teams were the best defensive teams in school history.

Of all the new coaches in FBS this season, Tedford is poised to do the best. Fresno State won 10 games last year and returns one of the most prolific quarterbacks in the country – Jake Haener. Roughly 80 percent of the Bulldogs offensive production from 2021 returns in 2022. Tedford might be able to repeat that double-digit win total of a year ago. He is 108-71 in his FBS career.

Another new head coach that might surprise the rest of the country is Georgia Southern’s Clay Helton. Remember him? He was the guy that got fired at USC. He inherits a program that went 3-9 last year but 8-5 in 2020. The Eagles won two bowl games between 2018 and 2020.

Helton steps in as the first big name coach and that may help in the recruiting department. As far as this season, Helton returns nine total starters. He did well in the transfer market bringing in former Buffalo QB Kyle Vantrease. The triple option offense will give way to a much more explosive modern spread. That will give Helton the best chance at improving on last season’s three wins.

Kelly is 146-61 in his coaching career. He nabbed former Arizona State starting QB Jayden Daniels to run his offense at LSU. The Tigers failed to reach 28 points in each of their last six games last season. Kelly will definitely have the athletes and the Tigers defense should be solid. The question is the schedule.

LSU starts the season with Florida State and then gets Mississippi State in Week 3. Playing the SEC West is never easy and the Tigers cross over to play at Florida in a battle of new coaches (Napier). The Tigers should be better than 6-7, but they probably won’t be too much better until a few years into the Kelly regime.

Cristobal played at Miami and won two national titles. He proved that he can coach with the best leading Oregon to success last season. How fast can Cristobal change things at the U? His first recruiting class ranked No. 24, but he does have a very good QB in Tyler Van Dyke.

The schedule is conducive to at least a 3-1 start and winning eight games isn’t a stretch. The ACC schedule likely won’t be as difficult as last season, but Cristobal will have to win the games Miami should win and avoid upsets.

Venables finally gets to run his own program. He has put together some of the best defenses in the country over the last decade. Venables best move might have been getting offensive coordinator Jeff Lebby from Ole Miss. The Sooners will continue to run the Air Raid on offense and should be much improved on defense.

Venables walked into a pretty good situation. The Sooners went 11-2 last season and there’s no reason why they can’t do that again. Lebby will have his former UCF QB Dillon Gabriel running the offense, so the Sooners shouldn’t miss a beat. The defense returns six starters and will be better in 2022. That should allow Venables to compete for the Big 12 title again.

Lanning was the coordinator of the best defense in college football last year (Georgia). Now, he becomes the head man at Oregon, a program that won 10 games in 2021. The Ducks will have former Auburn QB Bo Nix running the offense and the defense should be better.

The schedule is a tough one. Lanning will actually take on his old team in the season opener in Atlanta. There is also a Week 3 game with BYU. Oregon should still win the Pac-12 North, but a double-digit win season seems like a stretch.