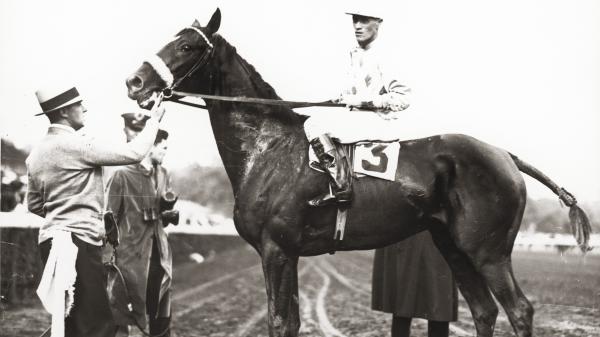 Saratoga Race Course is famous for a lot of reasons: it’s the oldest sporting venue in the United States, it’s host to some of the best horse racing in the world, and it’s the summer playground for titans of industry and celebrities.

But perhaps the Spa is most well-known for this: it’s the racetrack where favorites lose and longshots score the biggest victories of their lives. Horses like Man o’ War and Secretariat lost at Saratoga; and a horse named Jim Dandy won the 1930 Travers Stakes over that year’s Triple Crown winner Gallant Fox at the shocking odds of 100-1. The feat earned Jim Dandy both a race and bar named in his honor at Saratoga. Read all about the legend of Jim Dandy here.

The “Mid-Summer Derby,” the nickname of the Travers, is specifically prone to upsets with favorites losing in over 56% of the race’s editions.

So, which horses have sprung the biggest upsets in the history of the Runhappy Travers Stakes? Since the advent of pari-mutuel wagering at Saratoga in 1940, these are the horses who sprung the largest upsets at the Spa. What’s interesting is that four of the 10 biggest payouts came in the last decade, so this may be the year that the trend continues.

In 1945, Pavot was a heavy favorite to win the Travers Stakes; however, it was Adonis who came home first to pay $53.50 for a $2 wager, the biggest price in the modern era.

1981 saw favorite Pleasant Colony, that year’s Kentucky Derby and Preakness winner, come close to victory, but it was longshot Willow Hour who got the win to pay $50.20 for a $2 win bet.

In modern times, V. E. Day bested Wicked Strong and Tonalist in the 2014 Travers to earn $41 on a $2 bet for his supporters.

In perhaps the most memorable upset in recent times, Triple Crown hero and overwhelming favorite American Pharoah finished second to Keen Ice in 2015, who rewarded his backers with a $34 payout for a $2 bet.

The 1968 Travers saw Chompion defeat favorite Forward Pass to reward his backers with $31.20 for each $2 win bet.

How does a $27.80 return for a $2 bet sound? Runaway Groom delivered just that in the 1982 Travers Stakes, a race in which 2-5 favorite Conquistador Cielo ran third. Read all about that edition of the Travers in Keeler Johnson’s story, Runaway Groom, a Track Bias, and a Stunning Travers Upset.

A year after Secretariat was defeated in the Whitney Stakes, Holding Pattern sprang the upset in the Travers, paying out $27.40 in the 1974 edition of the race. Preakness and Belmont Stakes winner Little Current finished second as the even-money favorite.

2012 was an incredibly memorable year, since both a favorite and a longshot won the Travers: Alpha and Golden Ticket crossed the finish line at the same time, with Alpha paying out $4.10 for a $2 win bet while Golden Ticket paid $26.80. Talk about an aptly-named horse!

Last but certainly not least, in 2016 a gray colt named Arrogate came out of obscurity to win the Travers Stakes to pay savvy bettors $25.40 for a $2 wager. Arrogate set a new Saratoga track record for 1 1/4 miles, completing the Travers in 1:59.36, and went on to win over $17.4 million in a career that included victories in the 2016 Breeders’ Cup Classic as well as the Pegasus World Cup and Dubai World Cup in 2017.

Note: this story was originally published in 2020 and has been updated.

2022-08-25
Previous Post: Women in Poker Winter Festival Coming to Resorts World in December
Next Post: Play’n Go Welcomes Back Benny in “Bull in a Rodeo”