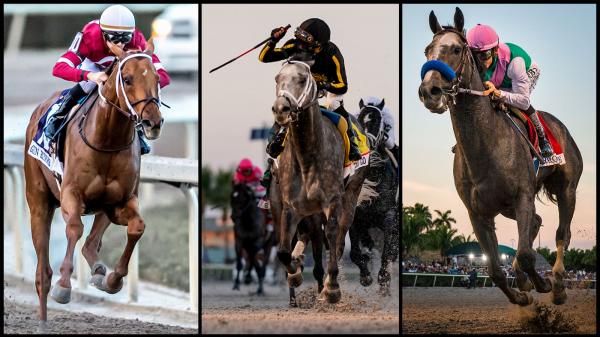 Since its inception in 2017, the Pegasus World Cup Invitational Stakes at Gulfstream Park has successfully bum-rushed the North American racing calendar and made an impression comparable with hoofprints from the gigantic statue of the winged equine icon of Greek mythology that resides at the Hallandale, Fla., track.

Five years ago, The Stronach Group revised the existing Donn Handicap at Gulfstream and inflated the race purse to a then-world record $12 million, and their decision was rewarded handsomely when the sport’s two top superstars of 2016, California Chrome and Arrogate, returned for a rematch of the Longines Breeders’ Cup Classic. Since then, the Pegasus purse has been raised and then lowered, but there’s been no loss of star quality. (The Donn Handicap, first held in 1973, was year-in, year-out, Gulfstream Park’s flagship race for older dirt horses. Winners include Forego, Foolish Pleasure, Deputy Minister, Creme Fraiche, Cryptoclearance, Cigar (twice), Skip Away, Harlan’s Holiday, Medaglia d’Oro, Saint Liam, Invasor, and Quality Road.)

The Pegasus World Cup has become prestigious enough for some owners to extend a horse’s career a month into the new year before retiring them to stud, and that’s going to be the case this year, as last fall’s runaway Breeders’ Cup Classic winner (and 2021 Pegasus winner) Knicks Go returns for one final hurrah.

Below, I’ll take a look back at the fabulous five prior winners of the Pegasus World Cup and start some discussion fodder by ranking them in order of dominance. These rankings are based roughly 50-50 on the horses’ respective performances in the Pegasus and their overall career accomplishments.

Mucho Gusto entered the Pegasus as a four-time Grade 3 winner who had also finished second to Maximum Security and Improbable, two of the top 3-year-olds of 2019, in Grade 1 races. The son of Mucho Macho Man, making his first start for new owner Prince Faisal bin Khaled of Saudi Arabia, was sent off as the 3.40-1 second betting choice in the Pegasus behind favorite and 2019 TVG Pacific Classic winner Higher Power. While Higher Power finished a desultory last of 10, Mucho Gusto was right in the mix from the start under Irad Ortiz Jr. and powered clear at the top of the stretch to win by a dominant 4 ½ lengths over runner-up Mr Freeze. He earned a career-best 117 Equibase Speed Figure with the victory, which turned out to be the last of his career. The Bob Baffert trainee finished fourth overseas in the Saudi Cup a month after the Pegasus and then fourth again in his final start in the San Antonio Stakes in December. He was preparing for a Pegasus repeat bid but was retired in early January 2021 with a soft-tissue injury.

One of the more underrated racehorses of recent vintage, City of Light reached peak form in the final two starts of his career for owners William Warren Jr. and Suzanne Warren and trainer Mike McCarthy. Already a two-time Grade 1 winner in California sprints during 2017-’18, the Quality Road horse extended out to two turns and won a Grade 2 stakes at Oaklawn Park in spring 2018 and then competed well in both sprints and routes that summer and early fall. But he turned it up a notch in the Breeders’ Cup Dirt Mile that November at Churchill Downs, taking the one-turn event by 2 ¾ lengths and earning a 126 Equibase Speed Figure. Shipped to Gulfstream for the 1 1/8-mile, two-turn Pegasus, City of Light faced a formidable field headlined by 2018 champion older dirt male and Longines Breeders’ Cup Classic winner Accelerate. Surprisingly, the race lacked much suspense at all, as 3-2 favorite Accelerate could not sustain his run and finished a well-beaten third. City of Light, sent off as the 1.90-1 second choice, sat a perfect pace-pressing trip under Javier Castellano and romped to a 5 ¾-length score in the slop over longshot and Pegasus World Cup regular Seeking the Soul. City of Light earned another impressive Equibase Speed Figure of 124 in what turned out to be his career finale. He’s now a well-sought after stallion at Lane’s End in Central Kentucky whose first runners will hit the track this spring and summer.

This horse’s credentials don’t need much reflection as he’s arguably the best dirt horse in training and a shoo-in for 2021 Horse of the Year when the Eclipse Awards are announced in February (held after the Pegasus for a change). The pride of Korea Racing Authority has ascended from a longshot Grade 1 winner at age 2 back in 2018, to a Grade 1-winning miler for new trainer Brad Cox in 2020, and then to a star racehorse who silenced all doubters about his ability to run a longer distance with an authoritative score in the Longines Breeders’ Cup Classic 2 ½ months ago. His win in last year’s Pegasus served notice that indeed, Knicks Go could handle added ground as it was his first victory at 1 1/8 miles. He led all the way as is his custom in that race with regular jockey Joel Rosario in the irons and easily won by 2 ¾ lengths over Jesus’ Team as the 13-10 favorite. Knicks Go’s Equibase Speed Figure of 115 and his final time of 1:47.89 rank fifth and fourth, respectively, among Pegasus winners to date, but in terms of sustaining elite form he’s right there with the two horses discussed below … and if he is able to defeat the likes of Life Is Good next Saturday and tally a repeat in this prestigious race, the son of Paynter will make a strong case to claim the top slot on this list.

Truthfully, 2017’s Horse of the Year is 1A to Arrogate’s 1 on this list. Convincing arguments can be made for both horses as they are unquestionably two of the top five North American dirt runners of this century’s second decade. Gun Runner was kept in training by Steve Asmussen and owners Winchell Thoroughbreds and Three Chimneys Farm after winning five of six starts in 2017 including the Longines Breeders’ Cup Classic, and he was the 11-10 favorite in a race that also featured the the 2016 Travers Stakes winner (West Coast) and runner-up (Gunnevera). That pair would finish second and third, respectively, to Gun Runner in a Pegasus that was never really in doubt. Jockey Florent Geroux kept his charge in touch of early pacesetter and Breeders’ Cup Classic runner-up Collected through the backstretch before taking over on the far turn and coasting to a 2 ½-length victory that netted a 128 Equibase Speed Figure, tops on this list. He had just been honored as Horse of the Year two days earlier at a ceremony held at Gulfstream Park, and with no more worlds left to conquer, the son of Candy Ride went off to stud at Three Chimneys in Kentucky. Gun Runner’s first foals to race were beyond impressive in 2021, earning him leading freshman sire honors in North America.

The late, great Arrogate tops this list by a nose over Gun Runner, and his victory in the inaugural Pegasus occurred in the midst of one of the best – if not the best – sequence of performances by a racehorse this century. The Juddmonte Farms-owned, Bob Baffert-trained son of Unbridled’s Song had emerged from the California circuit to make national news months earlier when he won the 2016 Travers Stakes by an astounding 13 ½ lengths and set a track record at Saratoga for 1 ¼ miles to boot. Next up, he defeated the 2014 Kentucky Derby winner and Horse of the Year California Chrome by a hard-fought half-length in the Breeders’ Cup Classic. When it was announced that both Arrogate and Chrome would meet up once again in the premiere running of the Pegasus, press coverage and public interest in the showdown approached levels commensurate with the Breeders’ Cup, if not Triple Crown. As it turned out, Arrogate was simply too good in the Pegasus, unleashing a breathtaking turn of foot nearing the top of the stretch to win by a geared-down 4 ¾ lengths under Mike Smith as the 9-10 favorite (6-5 California Chrome finished ninth, but was still voted 2016 Horse of the Year). Arrogate set a track record for 1 1/8 miles at Gulfstream Park of 1:46.83 that still stands, and he earned an Equibase Speed Figure of 124. The best was yet to come, however, as in his next start he shipped half a world away and overcame a dreadful start to defeat Gun Runner by 2 ¼ lengths in the Dubai World Cup Sponsored by Emirates Airlines. That victory capped Arrogate’s sterling winning streak, as he did not reach the winners’ circle in his final three starts in California and ended his career soundly beaten by Gun Runner in the 2017 Breeders’ Cup Classic. He tragically was euthanized after an illness in June 2020 and will be represented by only three crops at stud, but Arrogate’s extended run of brilliance during 2016-’17 won’t soon be forgotten.

2022-01-20
Previous Post: “XR technologies and metaverse represent the same opportunity for the casino industry as the Internet did in its time”
Next Post: Jake Schindler Wins Stairway to Millions Event #6: $25,100 NLH ($287,500)