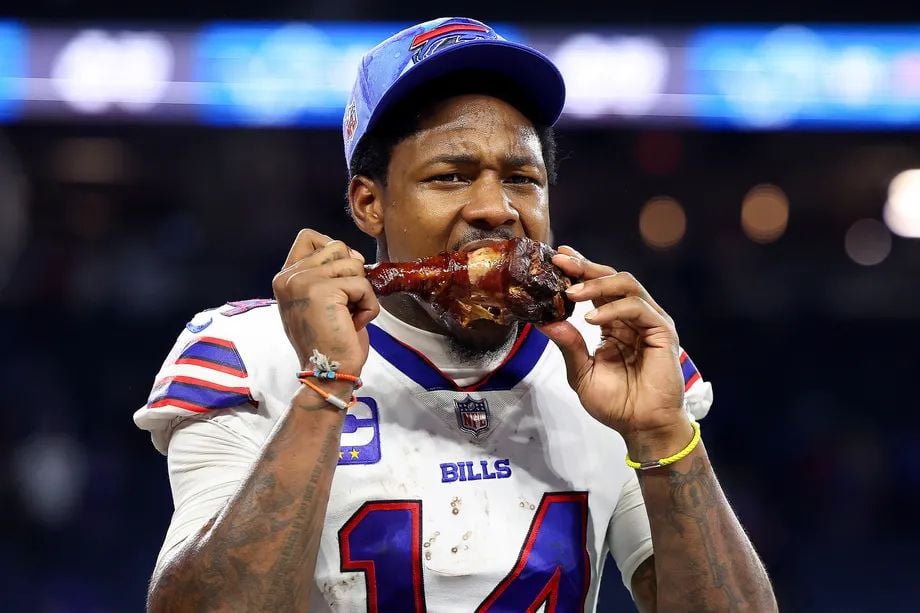 All the favorites got the job done for the NFL’s Thanksgiving Day lineup, a rarity in a season that has underdogs overachieving. What was even more surprising was the performance of the Detroit Lions, who almost stole the game from the Buffalo Bills.

Buffalo Bills wide receiver Stefon Diggs eats a turkey leg on the sidelines of the team’s game against the Detroit Lions. The Lions almost had him eating crow as the game was closer than bettors imagined. (Image: Getty Images)

Tyler Bass made a 45-yard field goal for the Bills, this year’s top Super Bowl contender, with almost no time on the clock. That saved the game from OT as Buffalo took the 28-25 lead and the win.

Although the Bills didn’t play close to the level anyone expected, they got the job done. They were a long -440 on the moneyline, indicating an emphatic win, but failed to dominate.

Bills Get The Job Done

QB Josh Allen set the table for the game-clinching field goal. He connected with wide receiver Stefon Diggs and carried twice to push the ball down the field. Allen finished the day with 253 yards and two touchdown passes on the way to the team’s eighth win this season.

Jared Goff finished with 240 yards and two touchdown passes for the Lions. However, the offense was inconsistent in the red zone. The defense did a decent job at containing the Bills, picking up three sacks on Allen, but Buffalo continued to push just enough to hold on.

Buffalo (8-3) has taken two straight games and is now just ahead of the Miami Dolphins in the AFC East race. Detroit (4-7) lost its bid to take four wins, a feat it hasn’t achieved since the 2016 season. Instead, it suffered its sixth straight loss on Thanksgiving Day.

The Boys Battle In The House

The Dallas Cowboys took advantage of a special performance to overcome a divisional rival in the NFC East. Their 28-20 victory against the New York Giants secured a second-place spot in the NFC East behind the Philadelphia Eagles and showed that they’ve come a long way from where they were last year.

The Giants started strong, taking a 13-7 first-half lead, but failed to sustain the rhythm in the second half. The Cowboys rocked behind a solid performances from QB Dak Prescott with two passes TD and 216 yards, who mixed things up with running backs Ezekiel Elliott and Tony Pollard. They combined for over 150 rushing yards.

Wide receivers CeeDee Lamb and Michael Gallup, along with tight ends Jake Ferguson and Dalton Schultz, were too much for the Giants. They combined for over 200 passing yards, of which Lamb brought down 106.

The second half belonged to the Cowboys, who outscored their opponents 21-7. Those seven for the Giants came with about 10 seconds left in the game, with New York having nowhere to go from there.

The Cowboys, like the Bills, were also huge favorites in this game at around -500. Although they pulled it off, they missed on the 10-point spread that almost all sportsbooks offered.

Vikings and Pats Put On A Show

The Minnesota Vikings beat the New England Patriots 33-26 in an intense duel of offenses. With the win, the Vikings remain in first place in the NFC North, at 9-2, while the Patriots retain their third-place spot in the AFC East with a 6-5 record.

QB Kirk Cousins had a great game for the Vikings. He threw for 299 yards and connected for three touchdown passes. Wide receiver Justin Jefferson was his go-to man, and he ended the day with 139 receiving yards and a touchdown.

The display of offensive power from both sides lasted into the third quarter. New England hit with a 75-yard drive that Mac Jones, who had 359 yards and two scores, capped with another TD pass. This one went to tight end Hunter Henry, who put his teammates ahead 16-23.

Minnesota didn’t hold back. It responded with a spectacular 97-yard kick return from running back Kene Nwangwu that brought the game back to 23-23.

After an exchange of field goals, the game was still tied heading into the last quarter. The Vikings dug in, however, reaching the red zone thanks to the sure hands of wide receiver Justin Jefferson.

His catch put Minnesota at the 15-yard line. On the next play, Cousins ​​found wide receiver Adam Thielen in the end zone to move ahead 33-26. A few sloppy series later, the Pats put themselves in a position to tie the game one more time. However, the Vikings defense put up a wall that allowed them to hang on.

This was the closest game for the sportsbooks to call, and the performance of both shows why. However, the favorites won in the end and covered the spread. The Vikings face the New York Jets next, a team who recently took a surprise win against the Bills.