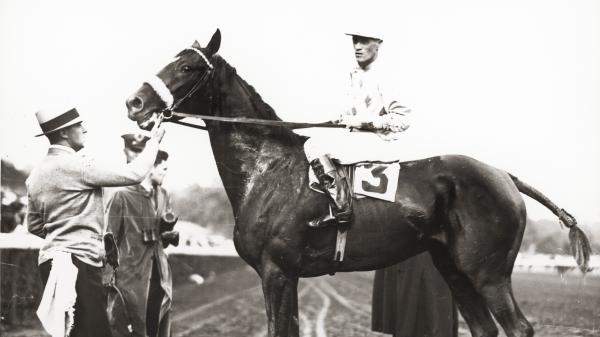 When horses achieve greatness, or accomplish particularly memorable feats, it is customary for stakes races to be named in their honor. Across the country, there are races the bear the names of legends like Man o’ War, Secretariat, Kelso, and Cigar; even more recent greats like Zenyatta, Rachel Alexandra, and Wise Dan are remembered with stakes races.

Every summer, Saratoga Race Course in New York hosts the Jim Dandy Stakes, a major prep for the prestigious Travers Stakes later in the Saratoga meet. It is only fitting that the Jim Dandy Stakes is a prep for the Travers, since it was in the 1930 Travers that an unassuming 3-year-old chestnut colt pulled off one of the most astonishing upsets in the history of horse racing to ensure that his name would never be forgotten.

His name, naturally, was Jim Dandy. His sire father) was Jim Gaffney, winner of the 1907 Hopeful Stakes and a successful stallion that had already sired the 1923 Preakness Stakes winner Vigil. Jim Dandy’s dam (mother) was Thunderbird, a daughter of the very successful sire Star Shoot, and further back in Jim Dandy’s pedigree were the names of many other famous horses, including Epsom Derby winner Bend Or, English Triple Crown winner Isinglass, and the remarkable U.S. sire Lexington.

Yet despite his impressive pedigree, Jim Dandy was relatively unaccomplished during his first year of racing in 1929. Running nine times, he won just two races, including a 50-1 upset in the Grand Union Hotel Stakes at Saratoga, which was conducted on a sloppy track that Jim Dandy seemed to relish. But after that race, Jim Dandy lost his next four starts, and 1930 was no better, as he started the season with 10 consecutive defeats in races that were far from top class.

This was a remarkable contrast to 1930’s leading 3-year-old Gallant Fox, a seemingly unbeatable colt that had won the Wood Memorial in his seasonal debut before adding the Kentucky Derby, Preakness, and Belmont Stakes to sweep the Triple Crown. Showing no signs of slowing down, Gallant Fox won the Dwyer Stakes by 1 ½ lengths so easily that his Daily Racing Form past performances include the notation “loafed,” and two weeks later, he won the rich Arlington Classic — then worth more than any of the Triple Crown races — by a neck after a long stretch battle.

Much like 2015 Triple Crown winner American Pharoah, Gallant Fox was a rising star making history with every start as he headed to Saratoga for the prestigious Travers Stakes on Aug. 16, and there were few people that believed Gallant Fox could be beaten. He had it all — excellent early speed, a powerful finishing kick, and proven ability on both fast and wet tracks. He would be facing only three rivals in the Travers, and only one — Whichone, the leading 2-year-old of 1929 and a winner of three straight races at Saratoga — was expected to have a chance of pulling off an upset.

The odds reflected this confidence. Gallant Fox was made the heavy favorite at 1-2 while Whichone was sent off at 8-5 and third choice Sun Falcon was 30-1. Jim Dandy? No one thought he had a chance, and his odds were a staggering 100-1.

But then two factors combined to dramatically change the complexion of the race. First, rain reduced the track to a muddy, wet mess officially labeled “heavy,” a condition deeper and wetter than Gallant Fox was used to encountering.

Secondly, when the horses were sent on their way at the start of the race, Whichone showed more early speed than in the past and engaged Gallant Fox in a tremendous battle for the lead.

All of the sudden, a speed duel was underway.

Sonny Workman, the jockey of Whichone, believed that the outside part of the track might be faster than the rail, and allowed Whichone to run many paths off the rail throughout the race. Gallant Fox, drawn outside of Whichone, had no choice but to go even wider, and both colts lost a tremendous amount of ground while setting fast fractions of :25 flat, :49 2/5, and 1:13 3/5. In the meantime, several lengths behind them, Jim Dandy hugged the rail in third place, splashing happily through the muddy conditions that he loved.

As the race went on and Gallant Fox and Whichone continued their intense battle for the lead, there was a sudden flash of movement along the rail. As the leaders began to tire from their exhausting efforts, a longshot was rallying fast on the inside. Turning for home, with Gallant Fox and Whichone on the far outside, the improbable … the impossible … the unthinkable suddenly unfolded before the eyes of the 30,000 fans in attendance.

Gallant Fox, the Triple Crown winner and seemingly unbeatable champion, had lost the lead. And the new leader was a chestnut blur named Jim Dandy.

Not content to merely pull off one of the biggest upsets in history, Jim Dandy chose to make his performance as memorable as possible. With complete ease, he bounded away from Gallant Fox, leading by two lengths, then three, then five, then six, and finally eight lengths as he crossed the wire alone. The final time for 1 1/4 miles was a very slow 2:08 flat, a further demonstration of the track’s very slow and muddy condition.

For Gallant Fox, the Travers would mark his only loss of the season; after his shocking defeat, he rebounded to win the Saratoga Cup, Lawrence Realization, and Jockey Club Gold Cup to retire with record earnings of $328,165. In contrast, Jim Dandy would never win another stakes race, and he eventually retired at the age of 12 with a record of just seven wins from 141 starts. In his last four seasons of racing, he never even finished in the trifecta.

Yes, for the majority of their careers, there was no comparing Gallant Fox and Jim Dandy. But on one summer day at Saratoga, it was Jim Dandy who reached the winner’s circle and achieved immortality in his own way.