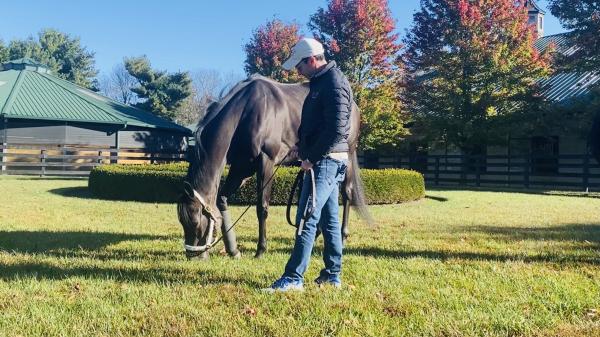 The Maven of the Thoroughbred Aftercare Alliance: Jeff Bloom

Jeff Bloom is a Thoroughbred maven, but according to him, the definitions of a genius, a maestro, or a wizard, do not square. He’s a person of humility, and people of humility would never admit to being something like a maven.

That’s what makes him one.

The original Yiddish translation of the word did resonate for him — someone who understands — sparking a wry grin. “You know my grandparents spoke Yiddish, and they came to the states before World War I, as immigrants from Eastern Europe, Russia, and specifically, Ukraine,” he explained.

Bloom’s maternal grandfather was a horse racing fan, listening to his transistor radio out in Los Angeles, and always could be spotted with a newspaper in-hand that was open to the racing section. “He never went anywhere without it,” Bloom said.

As far as his own arc in the Thoroughbred industry, Jeffrey Bloom, or Jeff, came to know animals and love them from a young age. He understood that they were great companions, and especially the equine variety, were majestic in their movements, and a definite pleasure to be around when it came to understanding their personalities.

“This is going to sound very contrived,” he admitted, “but it’s all about the connection to the horse for me. … Early on, I knew Thoroughbreds were a business, more so though, I understood it was about their welfare.”

Bloom has devoted more than 40 years in this business. First, as a groom at San Luis Rey Downs, then as a jockey on the tough 1980s Southern California circuit, next as a marketing media man and group sales lead for ownership groups (West Point Thoroughbreds), and finally, as the head of his own stable, Bloom Racing.

Bloom understood the complexities of the Thoroughbred world. His early influence was Muzzy Francis, a jockey-turned-trainer, who imparted riding wisdom back in 1979, but it was also three years-worth of life experiences. Part Mickey Goldmill from Rocky, coupled with a sprinkling of Dale Carnegie, those lessons formed the foundation for everything Bloom does even to this day. One of the core principles that was central? Aftercare. “Horses that I rode and formed relationships with, I always wanted to know what happened to them, and be a part in where they went next, if I could,” said the prescient Bloom.

That desire burned inside of him, and just about the time that Bloom Racing LLC was formed (2011), another entity came into being — Thoroughbred Aftercare Alliance (TAA). The former was the realization of Bloom’s dream to found his own racing outfit, and it’s been extremely successful with runners like Midnight Bisou, Snapper Sinclair, and A Red Tie Day, all sporting the distinctive red polka dot sleeves en route to victory after victory. The latter though, is a unique organization. Now, 10 years old, it has also grown close to Bloom’s heart over the past few years.

Joining the TAA board in 2019 was the first step toward service, and earlier this year, he was voted in to replace outgoing President Jimmy Bell. “It’s such an absolute honor to be involved with such a professional staff, and great partners like the Breeders’ Cup and The Jockey Club … that makes this an all-in mission,” Bloom said.

The mission of the TAA is fairly simple on the surface. Fund organizations that help Thoroughbreds find temporary or permanent homes after their racing and breeding careers are complete. Right now, the TAA has 82 such “accredited” shepherds across America, but they are always looking for more.

According to Bloom, the TAA has grown exponentially over the years, and that is indicative of how far the grassroots movement over the decades has evolved. “All of the individuals that have banded together over the years, we are standing on their backs,” he said with passion in his voice. “I think that awareness comes from a myriad of sources, and sometimes it is from the unlikeliest of places.” Industry viewpoints have melded with diverse sources, like public opinion and politicians’ perspectives, and that has led to more organized outreach. That’s a good thing, even in the face of major criticism.

While educating everyone inside the sport and those looking in from outside, the TAA is all about what can be done concerning retired racehorses. Bloom is adamant that taking care of these animals isn’t an option, it’s an obligation.

“We don’t have a choice, so if you are in this business in any way, then we all have to pay our fair share of the cost,” he said frankly. That has gone well in many respects when you consider that auction houses like Ocala Breeders’ Sales Co., Fasig-Tipton Co., and Keeneland donate portions of their sales to the TAA. There are other mechanisms that earmark a percentage of all claims made in New York and, of course, donations are very important as the lifeblood of the organization. Wealthy individuals that make up the bulk of the sport’s ownership come through regularly.

Still, there is much more to be done.

The TAA has a complicated funding process and they do not make decisions lightly. Their main focus is governance, and that drives them to develop more diverse processes each year. Bloom gets charged up about this prospect because it is how horses literally connect with humans. Aftercare at its finest.

Bloom reminds us: “The toughest cases are not the healthy ones; it’s the ones that have health issues, and they need us the most.” The TAA structure comes down to one thing, and one thing only, funding, and there is never enough. Raising money, not governance continues to be the major challenge, but it one that Bloom and the TAA are capable of tackling.

What it comes down to is experience and an understanding of where they have been. As a maven, Bloom is resolute, and along with board members, staff, and a cadre of supporters, they will continue to engage in a pro-active approach. The best means to do that?

“It’s education and outreach that can make the biggest difference,” he said, “as long as we keep focused on relationships, then we can continue to improve on our mission.”

It’s all in a day’s work for Jeff Bloom. If there is anyone that is up to such a task, it’s a maven like him, just someone who understands.

2022-10-10
Previous Post: Lyfts with No Drivers Come to Las Vegas Strip
Next Post: HighStakes to Run Mini-Series in October with $100K Main Event