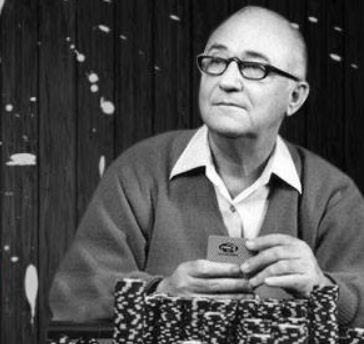 The Moss Game – Gambling With An Edge

Old-time Vegas poker players will remember different games they played over the years: the infamous razz at the Stardust in the ’70s, 7-stud at Caesars and later the Mirage, and PLO at the Golden Nugget in the ’80s. Personally, I spent untold hours at the 4-8 limit Omaha straight high game at the Nugget, before moving on to the 5-10 PLO there. But my favorite game of all was the “Moss game” at the Horseshoe.

Johnny Moss was a poker legend. His contemporaries, almost to a man, call him the best player of his generation. (How he would fare against today’s generation is a matter for conjecture.) When the Golden Nugget closed its poker room in 1988, the Binions decided to open a poker room for the first time other than during the WSOP. The feature game was 10-20 limit hold ’em, which at the time was the biggest steady limit hold ’em game in town. Johnny was long-time best friends with Benny Binion, whose son Jack made sure Johnny was taken care of. He employed Johnny to host the 10-20 game and gave him a room at the Horseshoe. Johnny started and played in the game almost every day.

There were some great things about that game. The rake was $2 max, the lowest in town. They tried to raise it to $3 and Johnny threw a fit, so it stayed at $2 until his death. We loved Johnny for that and wished he’d live forever, but when he died in 1995, the rake was raised pretty much the next day. We also loved him because every game needs a live one, and strange as it might seem, the greatest player of his generation was it. He was never a limit player in his heyday and his poker skills had eroded with age. But he still had that innate poker sense and cunning that made him great, and I learned a lot from observing him.

Johnny could be very crusty and downright mean, as I’m sure a lot of dealers from those days will attest. He wasn’t that different from a lot of the road gamblers. They were tough guys who weren’t real warm and fuzzy. But Johnny liked me and I sat with him while waiting for the game to start. He told me stories of his days on the road. How he sat in the stands at high school football games and bet $50k or more on the outcome, and that most of the players were in their 20s and were playing mostly so gamblers had something good to bet on. How he took up golf because there were so many suckers became a low-digit player who could beat almost anyone around, except Titanic Thompson. He’d led a pretty amazing life and the opportunity to hear his stories of a bygone time were priceless. I was sad to see him go.

The list of players who cut their teeth in that game is pretty much a who’s who of stars from that era. Scotty Nuygen, Jennifer Harmon, Chau Giang, Todd Brunson, and Eli Elezira come to mind, as well as a host of cash-game pros who aren’t public names, but are well known in the poker community. There was a camaraderie among the players and dealers, and I think everyone who played that game on a regular basis became a much better player.

When Johnny died, the game lost its luster. I moved on to others, such as the PLO at the Shoe and the HORSE games that were starting to catch on around town. But ask any limit hold ’em player who was around at that time and I’m sure you’ll hear some great stories about the Moss game.

2022-07-31
Previous Post: “I Thought It Was A Two-Horse Race’: Shahama Shakes Off Favorite Juju’s Map, Pulls Away In Monmouth Oaks – Horse Racing News
Next Post: Las Vegas Flooding After Torrential Storm • This Week in Gambling