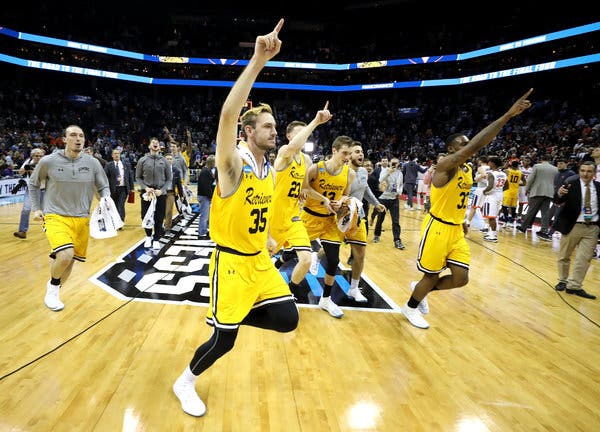 The Most Memorable Upsets of the NCAA Tournament

In less than two weeks, the field for the 2022 men’s NCAA basketball tournament will be selected. Then, the madness will begin. Fans expect there will be at least a few upsets over the course of the four weekends that make up March Madness. Here’s a look back at some of the most memorable upsets in the history of the NCAA tournament.

Survive and advance. Jim Valvano and NC State had to win the ACC tournament just to get to the big dance. In the first round, the Wolfpack had to go to overtime to beat Pepperdine. Valvano’s team would fight and claw its way to the national title game where they would face the best team in the country – Houston. Phi Slamma Jamma was led by Clyde Drexler and Hakeem Olajuwon, but NC State would keep the game close. With the score tied at 52-52, Wolfpack guard Dereck Whittenburg took a desperate 35-foot jumper. Freshman Lorenzo Charles grabbed the off-target shot and slammed home the winning basket at the buzzer.

Georgetown, led by Patrick Ewing, had won the 1984 national title and was favored to repeat. The Hoyas would advance to the national championship game where they would face Big East foe Villanova. The Wildcats were the No. 8 seed in the Southeast Region. In ’85, the NCAA tournament was expanded to 64 teams. Villanova likely wouldn’t have made the tournament had it not been expanded. The two teams had played twice during the regular season. Georgetown won both games by a total of just nine points. Villanova kept the game close and shot over 78 percent from the field to become the lowest seed to ever win a national championship.

A No. 15 seed had never won a tournament game until Richmond completely confused Syracuse and beat the second-seeded Orange. The Spiders kept Syracuse off balance by changing defenses all game. Richmond had upset a Charles Barley-led Auburn in the 1984 tournament. Syracuse star Billy Owens averaged 23.3 points a game that season and was the No. 3 pick in the NBA draft that year, but he couldn’t do much against the undermanned Spiders.

Just two years later, another No. 15 seed would knock a No. 2. Led by a Canadian point guard, Santa Clara went 19-11 and won the West Coast Conference tournament to earn a bid to March Madness. That point guard was Steve Nash (now the Brooklyn Nets head coach) who actually missed two free throws with seven seconds left, but Santa Clara held on for the win.

In 1989, Princeton almost pulled off what would have been the biggest upset of all-time when the Tigers entered the tournament as a No. 16 seed and took No. 1 Georgetown to the wire losing by one. Seven seasons later, head coach Pete Carril’s No. 13 Tigers pulled off a huge upset when they beat basketball power UCLA, 43-41. Princeton won in typical fashion. Gabe Lewullis used a back-door cut to receive a pass and score the game-winner.

George Mason earned a No. 11 seed in the 2006 tournament and promptly made a run to the Final Four. Head coach Jim Larranaga’s team beat Michigan State, North Carolina, and then beat No. 1 Connecticut in the East Regional final. At the time, the Patriots were just the second double-digit seed to ever make a Final Four. — You can Enter the 2022 March Madness Bracket Contest Now and play for real money —

Michigan State was one of the favorites to win the national championship in 2016. The Spartans packed their bags early as Middle Tennessee shot a blistering 58 percent from three-point range and held MSU’s Denzel Valentine, a Naismsith Player of the Year candidate, to just 13 points.

It had never happened in the history of the NCAA tournament. No. 1 seeds had won 135 games against No. 16 seeds. Then, UMBC faced Virginia. The Cavaliers were one of the favorites to win a national title. UMBC head coach Ryan Odom was the son of former Virginia head coach Dave Odom. The Cavaliers lost future NBA lottery pick De’Andre Hunter to a wrist injury just two days before the game. The loss would prove vital as Jairus Lyles would score 28 points to lead UMBC to the biggest upset ever in NCAA tournament history.