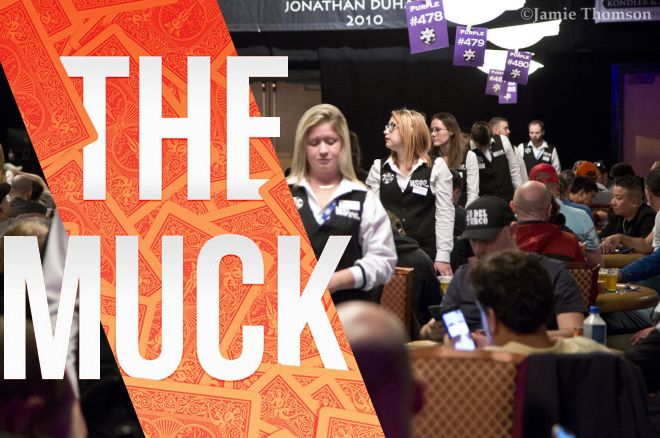 The Muck: How Much Should Poker Pros Tip a Dealer?

Poker dealer tipping has replaced the Robbi-Garrett story on poker Twitter thanks to a tweet from poker vlogger Lex Ozias (@LexOpoker1) that sparked a heated debate.

Ozias’s hot take, which read “If you play poker for a living: size of pot won shouldn’t dictate size of tip to dealer,” received the same reception as just about any other controversial opinion on social media — a mix of insults, contrasting views, and those who agree.

“Love getting on the tables and stacking guys like you,” Michael Mcardle (@m_mcardle12) tweeted at Ozias, for example.

The vlogger who has over 47,000 YouTube subscribers is certainly entitled to his opinion. Following a number of responses to his initial tweet, he followed up with a deeper explanation into his views on pros tipping dealers.

I may tip smaller per hand but I tip much much more $ annually compared to the random rec. I may play 1,200+ hours… https://t.co/V529sdgwYR

Ozias made it clear he was only referring to those who play poker professionally. Thus, he wasn’t concerned with the opinions of recreational players. That, of course, didn’t stop the non-pros from chiming in.

Opinions All Over the Place

One of the most common arguments to the initial tweet was that, to some, it seems silly to tip the same in a $100 pot as a $100,000 pot. But one poker fan made a valid counterpoint by rhetorically asking if a dealer works harder to push a six-figure pot versus a standard $1/$3 pot.

Another main talking point was in relation to the salary structure of a poker dealer. In the United States, at nearly every card room, dealers are paid a low hourly wage, usually between $10-$15.

Similar to bartenders and servers, they rely mostly on tips, which means they desperately need players to be generous or the mortgage won’t get paid. Some suggested that casinos pay employees a livable wage instead of forcing them to rely on tips. That could be a viable option, one in which many dealers would prefer, but would likely lead to increased rake to cover the added dealer salary expenses.

@thetruewarlock @LexOpoker1 I am an over tipper typically. But you are 100% correct. The idea of the customers payi… https://t.co/d6zgbz9YzT

“Dude, f**k these haters. You tip your tip and let them tip theirs. For what it’s worth, I’m with you. A great dealer, who’s entertaining, fast, remembers my name, doesn’t screw up the deal, etc., is always going to get a better tip,” @SeanHud argued.

“Should dealers make more then $25 an hr? Seems insane. $1 -$2 per hand is more then enough outside of maybe high stakes or streamed games,” Andrew B. Arthur tweeted.

“I would never comment on your [lack of] tips but you opened the door. It is your right to tip however you want but please don’t try influence others with your lack of generosity & paint it as helpful. Additionally, I know very few pros that tip as little as you,” Kim Stone, a Texas poker player wrote.

A few commenters attempted to make the comparison to restaurant dining. But that’s a tough comparison to make considering, in the US, the standard for good service at a sit-down restaurant is 20% or above. No poker pro could ever earn a living playin cards if they tipped 20% of the money in each pot they won, obviously.

Herbie Teope, an avid poker enthusiast and Kansas City Chiefs beat writer for the Kansas City Star, told PokerNews he is “of the belief the size of the pot dictates the tip” and wholeheartedly disagrees with Ozias’s take.

Poker pro Charlie Carrel brought up an interesting question in relation to the tipping issue.

What the Poker Dealers Say

Perhaps a bit surprising, but quite a few poker dealers seem to side with Ozias. Some dealers would prefer being paid a solid hourly wage and receive full benefits in place of the current structure.

“Tipping has become a way of subsidizing s***y jobs,” Justin McCluen, a former poker dealer in Des Moines, Iowa told PokerNews. “The only people I truly believe deserve a tip are people that deliver food, especially in their own vehicles. I’m asking them to do something I don’t want to do.”

@LexOpoker1 as a dealer I actually agree because I’m also a very fast and efficient one… I does suck when it just s… https://t.co/feM81sZm3V

“I’m a dealer and 100% agree with this statement. I also play quite a bit so I guess I better understand the players side,” Lee Bradbury tweeted.

Poker dealers are as important to this industry as anyone. The skilled dealers should be compensated fairly, whether that comes from the casino paying a reasonable salary or from tips. If the hourly wage isn’t sufficient enough for a dealer to get by financially, it is up to the poker community to step up and tip generously whether you’re a pro or recreational player.

In any industry, employees who are paid well are more likely to work hard than those who aren’t. If you value having a quality dealer at your table, and it makes no sense why any pro wouldn’t, you shouldn’t expect great service from underpaid workers.

That said, tip shaming is just as bad as not tipping at all or being a cheap tipper. Tip the amount that makes you feel comfortable, but take into consideration the person you’re tipping has bills to pay and you couldn’t play this game for a living in a land-based casino without them.

2022-10-29
Previous Post: EEG Closes Down Vie.gg Esportsbook in NJ, Spain and the UK
Next Post: Televisa to Spin Off Sports, Gambling Businesses in H1 2023