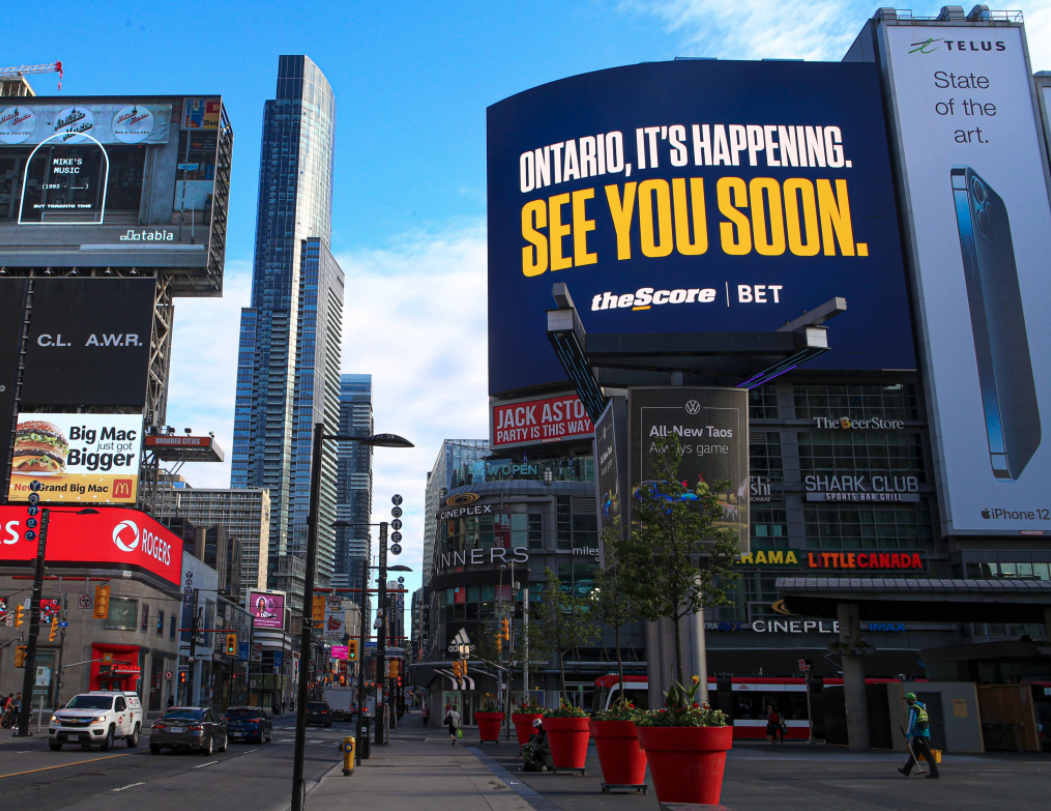 theScore Is Getting Half Of Ontario Sports Betting App Downloads

Regulated mobile sports wagering debuted in Ontario, Canada, on April 4. Channel checks indicate theScore Bet is off to an impressive start by at least one metric.

A billboard in Toronto advertising theScore Bet. An analyst says the company is garnering half of related mobile app downloads there. (Image: Yahoo Finance)

In a note to clients today, Morgan Stanley analyst Thomas Allen points out that on a month-to-date basis, theScore cobbled together a “very strong lead” in terms of sports wagering mobile application downloads, commanding 50% of those downloads.

Legacy and Betway, which is owned by Super Group (NYSE:SGHC), control the second and third spots, while BetMGM and BetRivers are each garnering 3% of sports betting app downloads in Canada’s most populous province, according to Allen. Caesars Sportsbook checks in at 2%.

Still, theScore’s strong start in its home market could be an encouraging sign for Penn National, which doled out $2 billion in cash and equity to acquire Score Media and Gaming last year. Though theScore bursting out of the gates in Ontario isn’t necessarily surprising, owing to the company’s superior brand recognition there, the downloads data could allay concerns Penn overpaid for the Canadian company. It also eases fears that the operator will struggle to attain strong market share.

theScore Bet is also available in Colorado, Indiana, Iowa, and New Jersey. Penn National, the largest regional casino operator, has other bases covered in Canada, as it owns an almost 7% equity stake in Australia’s PointsBet. That company also debuted in Ontario this month.

theScore is making other moves to further leverage its brand in its home province and potentially attract more customers.

For example, the sportsbook operator said earlier this month it struck a 10-year deal with Major League Baseball’s (MLB) Toronto Blue Jays. While such agreements are commonplace in the US, this is the first of its kind in Canada.

“The deal grants theScore Bet exclusive national marketing rights that extend across all gaming categories including sports betting, casino, online casino, and fantasy sports. The Blue Jays and theScore Bet also plan to create a branded, premium, 365-days-a-year, flagship sports bar and restaurant at Rogers Centre that will serve as an entertainment hub and destination for fans,” according to a statement.