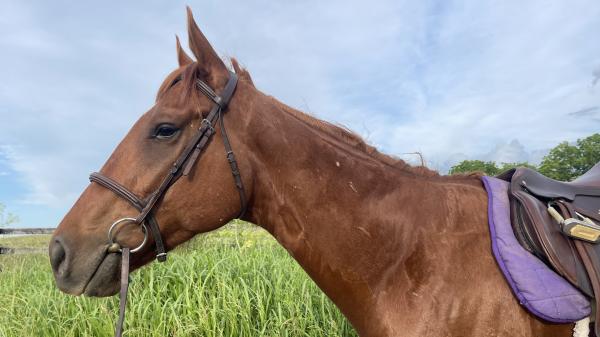 Thoroughbred Makeover Diary: Getting Through the Rough Patches and Building Trust

I was a freshman in high school when I fell off of my first rearing horse. The image of the mare on her hind legs in front of me, with my butt in the sand is seared into my brain: deep in the recesses, but it’s there nonetheless. I don’t remember hurting after that fall. Maybe I did but all I remember is thinking, this girl is going to fall over on top of me. She didn’t, and I don’t even remember it instilling a fear in me those following years, but here we are, over ten years later, and suddenly I’m thinking about it all the time.

This past month, I’ve been working with Finnick the Fierce on my fitness and gaining a sense of trust I hope will help us through whatever rough patches we end up encountering. He’s met the strange menagerie of animals that live on our farm, and I feel like we’ve grown our trust leaps and bounds. Now when he sees something he’s unfamiliar with he appears to look to me for guidance. I feel like I could lead that horse through fire and he would happily follow me. Physically I feel healthier than I have in quite a while. I’ve watched the number on the scale move in a promising direction and this horse is really becoming my partner with every long walk we take together. Yet, no matter how good I felt, walking Finn up to our makeshift mounting block – better known as an overturned water trough – I found a panic setting in whenever I placed my foot in the stirrup.

Finn hasn’t done anything to warrant this reaction. Each time I’ve ridden him he has been a gentleman. He walks off with confidence and explores every new corner of our farm with curiosity and courage that I’ve had a hard time finding in myself. So, a week or so ago when he started giving me a hard “no” when I asked him to move forward, I started questioning everything. I think my own anxieties contributed to his, or perhaps it was a change in tack, or any plethora of other factors.

In most cases, I’m happy to give him the benefit of the doubt. He’s so good for me on the ground, and so willing to do whatever I ask from him, so when I get on him and suddenly the willingness changes, I think I must be doing something wrong. So I get off, I adjust the tack, I give him a pat, I check his feet and I think of all the things I could be doing wrong to get this reaction. When I got back on and he was still giving me his hard “no’s,” I reluctantly called it a day. The rest of the night I beat myself up over getting off a horse and ending a session on a note I wasn’t fond of.

Though I was hesitant to get on the next day, I forced myself to, knowing I would be livid if I let this little setback actually halt our progress. The previous ride, I had used a different saddle pad, one with less cushion than Finn was used to, and I had changed his bit to something I thought would make his mouth happier. I switched it all back to what had worked for us before. If I brought it back to basics, I couldn’t give him all the excuses I was prone to. However, when I got on him, he did the same thing he’d been doing the previous day; throwing his head and refusing to move.

There were two voices in my head battling each other. There was the one telling me to bail, that I wasn’t cut out to work through this… and then there was the one who had spent years riding young horses, the one who was logical and told me over and over again, you know how to work through this. I knew I just needed to give him some more leg and more guidance. Simple stuff. That day, Finnick was telling me he just didn’t feel like it, especially when I pointed him towards the hills we’d been walking on foot the days leading up to this ride and I had to convince him that sometimes we just have to do the things.

I remember that in those first few rides he had with my friend Carleigh, sometimes Finnick just didn’t feel like it. Carleigh, being the confident rider she is, knew she could push him through it and get him to cooperate, which in the end, he would. He did the exact same thing to her when she asked him to head down to the arena on his second ride. It was barely a blip on her radar though. When you know you’re doing the right thing, it’s easy to convince yourself to keep going, to keep working when it gets hard. But when during every step you’re worried you’re making a mistake, it can freeze you in your tracks. I could tell that is what was happening to me. But just because my fitness level isn’t where I want it to be, and I didn’t have someone there telling me I was doing the right thing, didn’t mean I didn’t know how to do the right thing.

It was a colossal win for me when I finally gave myself permission to do what I knew was right with Finn. It was a much needed confidence boost to know he could fight me on something and we could get through it with much less drama than I was envisioning. Something as simple as asking him again in a different way and him answering with something like, “Oh, you really want to do this, huh?”