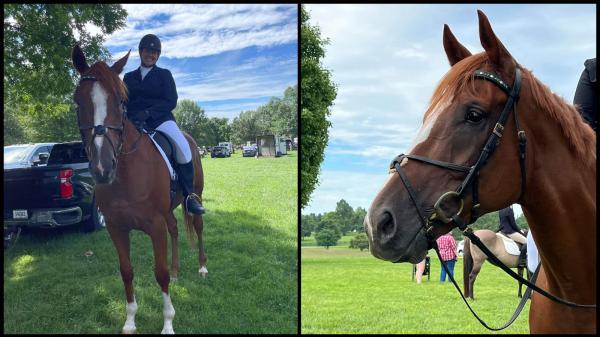 Wherefore art thou, right lead? In my last blog post, I was planning to spend the next month charting out the third version of our show schedule and building on the lessons learned during the Dom Schramm clinic. However, as has become standard procedure on this journey, almost as soon as I hit submit on that blog entry, those plans were thrown out the window when Odin presented with a minor, hind-end muscle-related lameness. After a few weeks off for treatment and evaluation, we got the go-ahead to resume training.

In talking with my farrier during that time, we decided to put front pads on Odin to help combat the very dry and hard ground conditions we were having in Central Kentucky this summer. And naturally, as soon as we did that, the rains came and Odin promptly pulled off one of his shiny new shoes in the mud. And if that wasn’t enough, once we finally got back under tack, we seemed to have completely lost the right lead. As I was watching the days of July tick quickly by, I began to think that his right lead and my sanity must have run off together.

Our canter work has been rough, to say the least, so I was hoping to have July to work on both of us getting more comfortable in that gait. Throughout my journey back to the saddle this year, I have encountered many physical issues and limitations that I never before experienced as a rider. To say it’s been frustrating and disheartening at times would be putting it lightly. I’ve struggled with lower back issues for a few years now and, despite treatment and work to improve it, something about Odin’s big, gangly canter really makes my lower back angry. Because of this, I’ve started to get unintentionally defensive with my riding when we do canter work, and all of that coupled with Odin’s tumultuous July resulted in our canter world being way behind schedule.

And so, as the July 30 horse show deadline quickly approached, I was stressed. This was the first show on the newly reworked schedule and I really did not want to miss it. But I had entered two dressage tests, both with canter components, and I just wasn’t confident in my ability to get Odin through them.

The day before the show, after a week of really frustrating rides in which we only achieved our right lead a few times and in which my back was particularly sore, I was leaning toward scratching and maybe admitting that we just wouldn’t be as polished for the Thoroughbred Makeover as I had hoped. Even the morning of the show as I was packing the trailer, I told myself that I needed to at least go and ride around in a show environment, and if warmup was too messy I’d just scratch.

So as Odin and I walked up toward the busy dressage complex, I fully intended to spend the morning hacking instead of showing. To be honest, I was feeling pretty sorry for myself and questioning if maybe I’d bitten off more than I could chew after being out of the saddle for so long.

To my surprise, Odin was happy and relaxed right from the beginning, which was a big improvement from our first show a few months ago. He really seemed to be taking everything in stride. As I began warming up for our first test, I was thrilled with how professional he remained. So, off I went to present to the judge and at least give the first test, Intro C, an attempt.

Odin was a lot more nervous once we got in front of the judge, which was compounded by a large food festival happening across the facility and loudspeakers from the jumping arena blaring as we trotted down centerline. The test was a mess, we missed the right lead, we did some lovely side passes down centerline to halt (at the wrong place, ooops), and as I thanked the judge sheepishly, all I could think about was getting back to the trailer and grabbing a big bottle of wine on the way home.

Odin hung out under a tree watching the chaos of three dressage rings and two busy warmups in such a calm professional way that even I was beginning to talk myself into doing the second dressage test. And so, as the ring steward called my number, I was feeling pretty good about giving this second test a shot.

Odin trotted down the centerline of the second test almost like an entirely different horse and proceeded to put down about as good a dressage test as we could possibly do right now, even getting his right lead, which surprised me so much that I nearly got lost (for the second time in this test, the first being a lovely albeit misplaced canter circle to the left) and prompted me to burst out laughing, which I hope the judge at least found amusing.

As I left the arena there was a huge smile on my face and I felt like a huge weight had been lifted. I was so thankful that I had people with me who knew exactly when to push me and that I had a horse that proved he was capable of showing up when I need him the most and deserved more benefit of the doubt than I was giving him. We ended up with a 2nd place in our first test, and 5th place with a score of 63.96 in our second test, which was Training 2 (and would have been two points higher without my error).

There is still a lot of work that needs to be done over the next 2 1/2 months, but we achieved one of my biggest goals from the beginning and that was to compete the Training 2 test by August. It wasn’t pretty, but we got through it and I am feeling tons more confident not only in myself (because let’s face it, I have a lot of work to do as a rider still) but especially in Odin, who truly exceeded all expectations and showed me many glimpses of how fun our partnership is going to be in the future. July marked one year since Odin’s last race, and I am excited to see where we are in another year’s time.

So for now, knock on wood, we are entering crunch time with a lot of good lessons under our belt and with clear areas of improvement identified. I’m going to keep working on my body so that I can be a better rider during canter as well as work on remembering my tests better, and Odin is going to get a bit of dressage boot camp through taking lessons and utilizing more advanced-training aids to help us improve steadiness in the bridle and get our canter work sorted out once and for all. August is officially “Find the Right Lead” month, and hopefully the next time you hear from me, we will be able to report that we’ve found it and have it solidly under control.