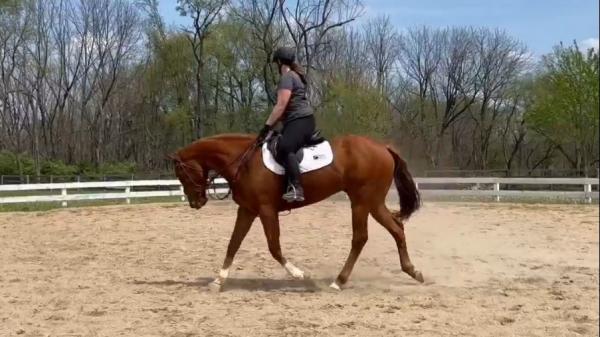 It’s no secret that Thoroughbreds retiring from the track often have a variety of things that need to be addressed before they are really ready, both mentally and physically, to take on a new career. The degree to which an owner and trainer has to address these things differs wildly from horse to horse, but I’ve yet to meet a newly retired Thoroughbred who didn’t need at least something addressed.

When I got Odin in December, I knew we’d be addressing his hoof angles and quality right away. I consider him to have good feet actually, but his long toe was causing his angles to be thrown off to a degree that I wasn’t comfortable really pushing him under saddle until we were able to correct. Through some savvy farrier work and with the help of high-quality supplements, I’m pleased to say that Odin has grown more hoof than expected in the past five months and we’ve been able to get his toe back to a more acceptable position, giving him ample breakover and causing his hoof angles to more correctly mirror his pastern angles. We still have a lot of work to do to raise his heels and grow more wall and sole depth, but these things will take time. For now, with the help of front shoes, Odin has a foot that I am comfortable working him on and the improvement in his body has been, quite frankly, astonishing even for this veteran equine professional.

During my post-purchase veterinary exam of Odin, though he did pass the exam (flexions, palpation, body condition, general soundness, etc.) my vet identified a few key areas that I needed to address quickly. The first being the feet and then secondary to the feet was stiffness in his neck and shoulders. This finding led to a call to my equine chiropractor, who confirmed my vet’s findings and added that she was certain this pain was related to the feet and that once we fixed that, along with some daily stretching, we should see improvement in this area of his body.

At first, the process was slow going. Odin was reluctant to stretch and, as any horseman knows, hoof changes just don’t happen overnight. Month two is really when I started seeing marked improvement in his willingness to stretch and in his overall movement out in the field. It was at this point that I really started to add some consistent under-saddle work but was hesitant to add in much collection work because I wanted to make sure I was giving his body every opportunity to heal and adjust before applying pressure.

At month three, I noticed that he was consistently reaching and stepping out farther, more fluidly, and with more confidence with his front legs. Under saddle it was taking less and less time to work him out of the stiffness that he had been starting each ride with, and he was less stiff each day following a hard ride. All this told me that the feet were coming around and causing him less discomfort. Our farrier efforts combined with chiropractic adjustments every six weeks was causing his neck, shoulder, and wither pain to subside. So, by April (month four) I began introducing some in-contact work to our rides. Odin didn’t pick this up very quickly at first and, due to the things going on in his body, I didn’t want to push for it.

But little by little he began to look for contact and by the end of the month he was consistently working in a nice introductory level frame. Turns out, he is actually much fancier on the flat than I anticipated. I didn’t buy Odin to be a show horse, as I’ve said since the beginning; I was just looking for a solid citizen to get back into riding with and to have fun with, but I think I actually have a horse that will be fun to show with, too, with which is a really great added surprise!

We’ve gone for a few lessons now and are riding about three to four times a week as weather allows. Some rides are nice, easy mostly walks or walk hacks, but I am trying to get at least two really solid working rides in each week and he seems to really enjoy the days when there is a bit more of a challenge. As we turned up the stress level with our rides as well as number of times we were trailing places, I started noticing Odin was getting a little girthy and fussy when I would brush over his belly or tighten the girth.

Ulcers are a common problem in OTTBs and something that should be frequently addressed in any high-performance horse due to the nature of the environment in which they live and compete. Odin didn’t initially present as a horse who had issues with ulcers, but it didn’t surprise me at all when signs that he might have them started to pop up. Additionally, despite him starting to shed his winter coat and spring grass coming in, he was just duller than I liked to see. After deworming and covering our bases there, I added a high-quality gut supplement to help support his gastrointestinal health during not only the transition time of winter into spring but also to help him manage his stress and anxiety levels as he continues to learn what his new job is.

Only a week into addressing this, I noticed a huge change in him. He was eating his grain more enthusiastically and the girthiness had almost entirely disappeared. By week three, his hair started to really shed off and underneath was a much shinier and healthier looking coat. By week four, he was really starting to fill out over his ribs and hips. I’m so pleased with the difference in him in such a short amount of time. I will continue to keep addressing this issue for another 60 days and am excited to see how he looks then, now that the workload is increasing and he should start to really build some correct muscles to do the job of dressage.

In five months, we’ve managed to get his feet and gut really under control which is a huge milestone in the training process and one that I am thrilled to have reached so early on. I am thankful every day that I had such a great vet, farrier, and chiropractic team behind me before even purchasing Odin because all of us working together have achieved some really cool things. Some serious time and money have been spent to reach this point in the training process and I do think it’s a major contributing factor in an OTTB’s chances of success in their post-track life.

In the Makeover Trainers Only Facebook group, I asked what OTTB trainers wish the racing industry knew about the process of retraining these horses. Hands down, the most popular response was that they wished the racing industry knew how much time and money it takes to get these horses on track (pun intended) for a new career. Keep an eye out for more on that in future blogs!

We still have a long way to go in Odin’s body work and most likely will be incorporating massage and Pulsed Electro-Magnetic Field (PEMF) therapies as we increase the training load. His neck mobility is much improved, but we still have a long way to go. His top line is still a work in progress, but as he learns to work in contact more, I will be able to do more long and low work with him which will address that. For now, I will be adding in lunging in a Pessoa system to our weekly training program. This will help him to work over his top line and through his body on his own and gives me added training tools for days when it’s too wet to ride or we’re unable to trailer to an arena.  All of the chiropractic and support therapies will most likely continue on a six- to eight-week cycle for the foreseeable future or until he tells me otherwise. For now, I am so happy with the improvement in his body and that his already good mind continues to be solid despite added stressors.

In the month of May, we will be tackling our first horse show and hope to build a more consistent training schedule. I really feel like we are walking strongly now. We may not be ready to run quite yet, but I think we’re finally ready to start jogging! Stay tuned!

2022-05-03
Previous Post: Poker World Shocked By Number High Stakes Cheating Allegations
Next Post: What Would I Be Doing?