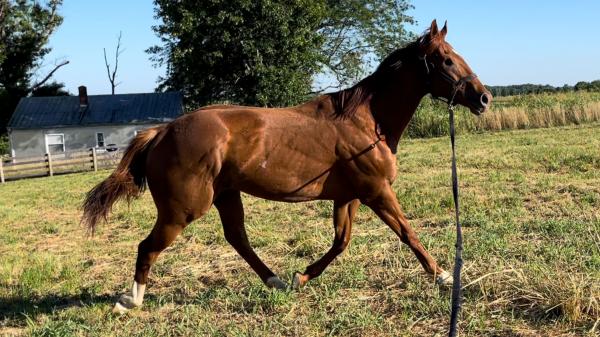 Thoroughbred Makeover Diary: Importance of Consistency With Finnick the Fierce

The goal for this month with Finnick the Fierce has been consistency and intention. He and I found ourselves aimlessly wandering around the farm with no real goal in mind, other than actually riding, and when he inevitably got bored with that endeavor I decided we needed to take a step back.

I’ve given Finn a little leeway to allow for an abscess to grow out and then I just started with lunging him again. With a newly mowed flat section of the farm, it opened up an area where I finally felt comfortable asking him for a little more. I’ve tried to set Finn up for success with everything we do and slipping on uneven ground is not something I’m asking him to overcome just yet.

In the past, I’ve measured a lot of wins off of what I can do with Finn on the ground on his blind side. This month was no different. Where previously I would call it a win when I could get him to pick up the trot going to the right on a lunge, now we’re able to canter. Granted, I haven’t figured out how to stop him from coming to a dead halt when he decides he needs to turn and put his eye on me. This is an occurrence which I often wonder if it will transition into his under-saddle work. I’m tempted to say no, but it won’t hurt to work through it now.

This is why the trust I discussed in my last blog is so important to me. So far, Finn has not felt the need to turn and face anything of concern when I am on top of him. Granted, we’ve been riding at our farm, somewhere he is comfortable and has explored at length with me. He has sniffed noses with the pig, the goat, the chickens. He’s gotten used to the dogs running through the tall grass and coming from out of nowhere to run at his feet. If anything, I’ve noticed when he gets nervous, he turns away from whatever the trigger is with the attitude of, “OK, enough of that, mom. Let’s move on.”

Finnick does like to play around a little bit before we get down to business. A consistent thread throughout our training these days is his need to test how badly I want him to do the things I’m asking. Whether it be a simple walk on the lunge line or continuing on our hack around the property, he likes to test me first and let me tell you, that can be frustrating. As established, I’m the type of person who will first think I’m doing something wrong when things just aren’t going right. I give Finnick every benefit of every doubt imaginable. However, when I lunged him and the boy just took off when I asked him to walk, I knew I wasn’t doing anything wrong there.

It took some time just to get him to come down to a walk but eventually we could walk, trot, and even canter in a controlled fashion — only to the left, though. He was so good I decided to turn him around and go to the right. Whenever we start off going that direction, I have to keep my arm and the lung whip extended out to him, with the whip just touching his shoulder, or if I can reach, his hip. The whip just acts as a guide to let him know where I am in reference to him, since he can’t see. I speak to him the entire time just to give him context.

So quickly you can fall back into the habits you have with a seeing horse, but when the eye is not there, you have to do everything verbally and by touch. The “by touch” aspect can even be difficult because even if I very softly tap him with the whip, it can cause an exaggerated response, which is fair when he has no idea what is actually touching him.

This is where that consistency comes into play. On his right side, my cues need to be specific. I’ve tried to even change my verbal cues, clucking vs. kissing, cracking the whip, saying “trot,” etc. Over the years, I think they all muddled together to mean “go” in my head, but in his, some of those sounds are favorable, and causes him to go forward, and others cause panic or confusion that results in him either taking off or stopping completely.

Don’t get me wrong, he is VERY capable with one eye. That eye doesn’t give him any limitations in my book. I think it even strengthens his character. His reliance on humans because of it has made him the sweetest horse I’ve probably ever worked with. He could stand still for days, with you just running your fingers through his forelock. But it means that he needs consistency, and right now, I’m happy to just work on that.

The last time I took Finn out, we walked, trotted, and cantered in both directions on the lunge line and he only came to an abrupt halt at the very end when he was asked, and once again, that is a win in my book.