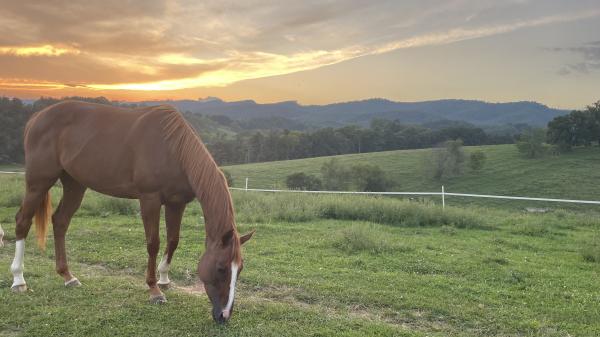 Thoroughbred Makeover Diary: Proud of Fin and Thankful for This Little Mare

August was a month of never-ending trouble. When we last left off, Fin was just beginning her stall rest journey and, in total, it lasted for almost four weeks! She blew an abscess from her right front coronary band and I thought we were in the clear. The weather forecast called for rain the next few days, so to be safe I thought I would keep her up until the weather had passed.

While waiting for the rain to pass, she surprised me with another abscess; this time it came out of her left coronary band. Finally, I was able to bring her home the last weekend of August, and we were both so happy.

After her arrival home, we lightly started back into work and spent a lot of time lunging in side reins to help develop her contact and really nail cantering while I could be on the ground to watch and guide her without having to worry about myself. While she wasn’t thrilled to be lunging, it really made such a difference when we started back with our under-saddle work.

While she was on stall rest, our wonderful veterinarian and farrier, Dr. Jenna Moore and Corey Sheets, conspired that Fin would best be suited for glue-on shoes in order to make it through the Thoroughbred Makeover since she is notorious for pulling regular shoes off her tiny feet. We set a date to have this done, and Fin and I were set to make the trip to Dr. Moore’s place. The afternoon we were set to go, the wind had suddenly gotten wild and Fin was absolutely jacked by the change in weather. I was also trying to load her by myself: cue anxiety.

My go-to way of loading while I’m by myself is to keep her occupied on the trailer with “fake dinner” long enough for me to shut the door behind her. This was made exponentially harder by the wind and having to remove my mounting block door stop in order to get the door shut. It took us about 30 minutes to work through our troubles with the wind, but we both remained calm and we accomplished the goal. It certainly isn’t a glamorous operation loading on my own, but we got the job done!

When we got to Dr. Moore’s house, Fin got to meet her horses over the fence and was happy to have made some new friends. Corey arrived shortly after and we set to work on her feet. She had been barefoot since the beginning of August, so they looked a bit scraggly. Corey did a beautiful job of shaping them back up and he got to work for the glue-on process. After the shoes were fitted, they had to be glued and cured for several minutes before final touches. While we waited for them to cure, I had Dr. Moore complete her health certificate and scan her microchip. I have had several nightmares about her microchip not matching her registration, but I am so happy to report that everything matches and the chip was found easily. Corey then completed his finishing touches on her feet and we were ready to roll!

When I asked Fin to load, she did not want to leave. This tends to be her toxic trait, but luckily, after what felt like an eternity and help from both Corey and Dr. Moore, she relented and got on the trailer for home.

I knew that I wanted to give Fin one more public experience before heading off to Kentucky. Luckily for us, the Virginia Starter Trials were holding one last schooling show of the season at the Virginia Horse Center this past weekend. We had such a great time there in July, so I knew this would be a great last experience. I signed us up for Intro C and Training 2 as I really wanted to give Training 2 a shot before Kentucky.

We arrived on Saturday and Fin quickly settled into her stall like an old pro. One of her favorite things, I have learned, is taking a good stall snooze!

We took our friends Sara and Alice, fellow Thoroughbred Makeover hopefuls, along on our weekend adventure. This was Alice’s first trip off the farm to a show environment, so Fin got to play the brave pal role in showing Alice around. We spent a lot of time walking around the grounds together and showing Alice all the arenas. Fin walked around just as chill as she does at home and was a great role model!

After our walk around, we decided to take the girls out for a school. Fin and I rode through both of our tests and practiced some movements for our demo ride in a real arena; our space at home is so small that it’s always fun to play around in a full-sized arena.

Our ride times were at the end of the day on Sunday, so we had some time to play around. Fin got some more wash-stall experience while I washed her white socks and I even splurged for her to try out a Bemer treatment while we were waiting. She really enjoyed that and almost fell asleep at the end; that girl loves to be pampered!

We eventually got ready 30 minutes before our first ride time and went for a quick school. I learned my lesson in July by schooling too much before our rides, and I definitely did not want a repeat of having a tired Fin! Our Intro C test went really well. She picked up the correct canter leads both ways — this has been a major struggle for us — and even managed to get a square halt at the end. We had some 7.5s on our test which I am really proud of and scored a 65.25% overall. We had about an hour between our two rides, but while we were waiting a storm snuck in. I was about to enter the ring to ride Training 2 when the judge started yelling at everyone to go back to the barn, so the show was called. While I am disappointed that our Training 2 wasn’t judged, I feel confident enough in our abilities to execute the test in Kentucky.

The past month has been a rollercoaster of emotions, but I am so proud of and thankful for this little mare. I sure did take a chance buying her off pictures last year, but I really got lucky with her. Being a part of the Thoroughbred Makeover has encouraged us to really go for it in our first year together and we have gotten so close; she really is my little girl!

In the next two weeks, we have one final lesson with Katherine planned, a chiropractor visit so she feels her best, and will spend some more time working on our canter. It has been a privilege to spend this year working with Fin, and I am so excited for our time in Kentucky!