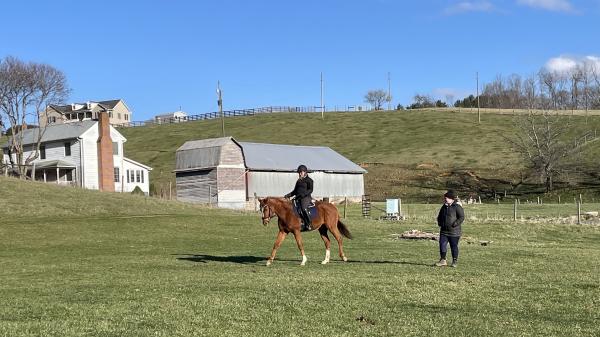 Fin has generally proven herself to be a very brave girl, but there is one thing that continues to cause us trouble: the trailer. Which, as you might imagine, is an essential part of the Thoroughbred Makeover journey.

We lost about four weeks of riding time between February and March due to Fin battling an abscess. Determined to find a silver lining, this turned out to be the perfect time to spend on light groundwork and trailer loading. As someone that is new to dealing with trailers and trailering myself, it has been quite the nerve-wracking experience getting her comfortable and acclimated in the trailer. We have spent a lot of time loading and unloading, and now she is confident enough to have her meals served on the trailer!

Once I felt confident in our loading skills, I decided it was time to take her out and about to expose her to different arenas, situations, and horses. With my sidekick Sara in tow for physical and emotional assistance, our first off-the-farm adventure was in early March. We went to my mentor Pam Umberger’s farm that happens to be just over the hill from our own place; the trailer ride took no more than five minutes. When Fin unloaded, she was very excited about being in a new place and was hollering at all the new horses she saw. Much to her dismay, they were not that interested in conversing with her. We took time to explore the grounds and were able to get in a very normal ride. I was thrilled! She loaded like a champ to go home on the first try and I chalked it up as a successful first outing. I was naively convinced that our trailering struggles were behind us.

Our next big adventure happened at the home farm when Katherine Abrams came down for Fin’s first under-saddle lesson in person. Of course, this also happened to be on the coldest and windiest day in March. While I felt like a bit of a wimp in the cold and was thankful for my winter breeches, Fin was fabulous. We spent a lot of time working on improving her steering and letting her figure out how to carry herself. She is sharp as a tack and has been catching onto new concepts quickly which has been super-exciting for me to experience.

After our lesson we had a few quiet weeks at home. I do not have an arena, just a nice flat spot on our hilly farm where we do most of our work. This can sometimes lead to extra excitement and challenges, though! Fin has a nice walk and trot, but we also are working on her becoming stronger for the canter. Most of the weakness is evident in the left lead canter and especially being able to turn in a timely manner. This lack of turning has sometimes turned into gallops off into the fields, but we are making progress! I notice her getting stronger every week and know that our conditioning is paying off.

I decided we had been at home long enough and that it was time for another outing to Pam’s farm — this time, alone. I got the trailer hitched in less than 10 minutes and Fin loaded like a star to leave our place; a sure sign that things would be smooth sailing. She was great for the short trip and unloaded with no issues, although she was antsy to be groomed and tacked up, but I expected that from her. We worked through that and she settled in nicely, relaxed into the work, and we had a productive ride. After all her hard work, she was great to untack and groom, so I assumed that loading would be a non-issue. Well, you know what they say about assuming.

Fin wasn’t having it and was clearly becoming agitated. I was too, to be honest, and felt like such a failure. I was by myself and started to think that I would for sure have to walk her a few miles down the road to get her home. I called my husband, Mike (honestly, looking back I’m not sure what he could have done for me other than moral support), and he said he would come out to try to help me load her. In the meantime, I was able to grab a lesson student’s parent to help me with the door and entice her onto the trailer with food in her dish for a “fake dinner.” To my relief it worked, but it certainly wasn’t ideal. I was able to back the truck and trailer out all on my own and head back to the farm. I was super excited and relieved to call Mike and let him know that I did manage to get my act together and that we were heading home, but I felt down about the loading experience we just had.

Fast-forward to my spring break from school. I had boldly scheduled an in-person lesson with Katherine at her place, which is about an hour away. This obviously means that Fin would have to load nicely once we were ready to head home from Katherine’s, and I was unsure if that would happen. The only person who was available to come with me was my very non-horsey mother; I was understandably nervous. Fin loaded great at the farm to leave, which seems to be on par for her. From what I could tell, she seemed very calm for our ride down the interstate. She was happy to unload when we arrived and I put her in a stall to hang out before our lesson. This was the first time she had been in a stall since she left the track and I was unsure how she would handle it. She did really enjoy talking to any of Katherine’s horses that would pay attention to her and handled being tacked in the stall very well. It was also, to my knowledge, her first time in an indoor arena. She was super curious about the strange-looking horse she saw in the mirrors, but overall unbothered! She was her normal self for our lesson, and it took her no time at all to relax into her new environment once under saddle. We had such a wonderful and productive lesson, which just made me so much more excited for our future together!

When we went to load to go home, I was met with some resistance and tried my best not to let my emotions get the best of me. Being so far from home, all I could think of was the worse-case scenario of having to leave her there. Armed with cookies and my mother having strict instructions about closing the trailer door when we were on, we tried again. Thankfully, she loaded on the second attempt and we had a safe journey home. I was so happy, but I know we still have a lot to work on with this to get consistent results each time we travel.

This coming month my goals are to get her out and about even more often with consistent loading results, take more lessons (virtual or in-person), and work on her stamina and strength. We have a lot of good homework and I am really looking forward to all the adventures this next month has to offer!