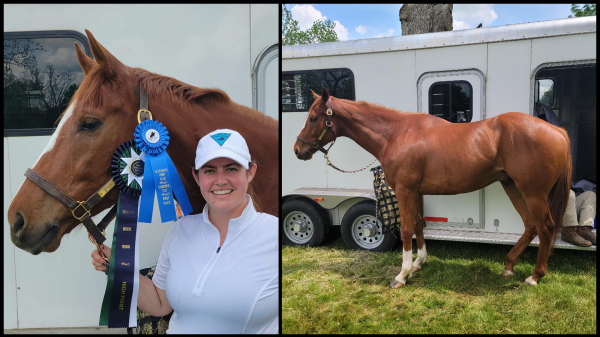 Thoroughbred Makeover Diary: The Process Vital on Path to Win With Odin

When I set out to write the blog for this month, I had a lot of ways that I thought it would go – focusing on the show Odin and I did and the good and bad takeaways. While I definitely want to do that, I’ve seen so many other Thoroughbred Makeover trainers posting about their experiences back in the show ring after some extended time away that I really want to give that topic its own space this month.

When I purchased Odin in December, I didn’t do so with a competitive year in mind. As I’ve said many times, I just wanted something fun to get back in the saddle with. But upon entering the Retired Racehorse Project’s Thoroughbred Makeover, I knew that I was committing to doing at least a little showing. After all, it wouldn’t be fair to show up to a big venue like the Kentucky Horse Park and a big show environment like Thoroughbred Makeover without at least preparing my horse a little bit. Just like you will see Thoroughbreds paddock schooling to familiarize them with the environment and process, I knew I would need to take Odin to enough shows that he understood the concepts of going to a new place, hanging out happily, and using his training and experiences to be rideable despite any nerves that he (or I) might have.

I watched as other Thoroughbred Makeover trainers took their horses to their first shows while Odin and I were still learning how to do a 20-meter circle and genuinely questioned many times if there was any real way we could be ready to do the test required of us at the event in October. As we progressed in our training, people began to encourage me to start looking for little shows, something low key where I could get my feet wet.

I passed on a handful of good options simply because I was just not in the mental headspace to do it. Early on, I had identified and come to terms with the fact that I was no longer the rider who would jump on anything and jump into any new experience without hesitation. While I might have been that way in my younger years, 33-year-old me needed to have all the ducks in a row and then rehearse with the ducks and then run a dress rehearsal with the ducks, and well … you get the point.

As the entry deadline to a local Pony Club fundraiser show was approaching, I ran through my dressage test no less than three times just to make sure I could even remember it before committing to entering. Even then, I ended up entering the lowest level possible – ground poles – despite having previously planned to enter cross rails. When it came time to hit the “submit” button on the entry, I just physically couldn’t make myself pick the cross rails option. And so, I then found myself in a position where, before the show had even happened, I already felt like I’d let myself down in my own expectations.

Nevertheless, I prepared diligently as if I was getting ready to ride in an FEI (International Federation for Equestrian Sports) level event, because I was so nervous that I wanted everything to be committed to muscle memory. Clearly, this is a ridiculous amount of pressure to put on yourself and your horse for a ground pole combined test at a local show but I kept telling myself that if I was going to do it, I was going to do it right. And then something happened between entries closing and the date of the show that totally blew up my own view of the process.

On Kentucky Derby day, a week before the show, a horse bred by the farm I work for was running in a maiden special weight race at Horseshoe Indianapolis racetrack. A 4-year-old in his second start, still looking to break his maiden, probably wasn’t a horse that was on anyone’s radar to watch, save for his connections. What the rest of the world didn’t know is that this horse was the last foal out of a tough-as-nails, superstar racehorse who not only left her mark on the track and on the breed as a Grade 1 winner and then Grade 1 producer but subsequently had captured the hearts of everyone at the farm and who we had lost only a few short years after this foal was born. His path to the track wasn’t easy, but his connections took their time and pivoted when necessary and certainly went through multiple versions of “the plan” just to get this horse to his first race.

His first race had been respectable, but he hadn’t won. However, something his trainer had said to me while we were discussing the performance had stuck with me: “He just needed to get a race.” Such a simple concept, but sometimes you just need to hear it said out loud in a certain way for it to sink in. All the time had been taken, all the boxes had been checked, the horse was training well but eventually he just needed to go and do it so he could learn and the trainer could evaluate his progress and adjust for the next race. And that next race, the one on Derby day, I watched that horse step up in challenging track conditions and absolutely dominate his competition, winning by eight lengths.

Sometimes, once you’ve given them the tools and schooled the tools, you just need to go and do it. And that resonated so profoundly with me that I can honestly say most of the nerves about the show instantly left me. We had prepared ourselves to the best of our ability and at some point we just had to go do it, we just needed a race. It was fine that we didn’t enter cross rails, it wasn’t the division level that mattered, it was the experience.

So the next weekend, I woke up only mildly nauseous and loaded up Odin for his first show ever and my first show in five years. He showed off his training so well, both the solid parts of it and the ones we still need to work on, and he was a perfect gentleman in warmup, remaining rideable despite some nerves, and finally proceeded to hang out at the trailer like a seasoned pro while I stayed to cheer on friends who were competing later in the day. When the scores were posted, we had won, which I found entirely hilarious because while I used to be a highly competitive person, this day I found myself truly just enjoying the process. Win or lose I was on cloud nine!

We just needed a race, and I was so thankful I didn’t give into the nerves and scratch or worse even, continue to put the same level of pressure on myself to perform well that I had in the weeks leading up to the show. Moreso even than Odin, I myself as a rider and trainer, just need to jump in do it.

I felt so much lighter having come through that process and now the entire Thoroughbred Makeover journey just seems a lot less ominous. The Thoroughbred Makeover isn’t the end of the journey, it’s just a stop along the way, just one race in many. We say it a lot, but sometimes it takes longer to actually sink in. Just as I watch each horse race and evaluate the performance given the horses current training and conditioning, I need to approach our journey the same. We may not win every race, some races may even be a wash, but as long as we’re entering the right race, as long as we’re taking good lessons home each time out … we will call that a win!