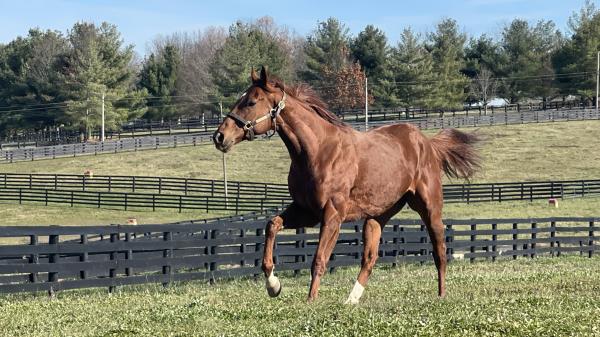 Thoroughbred Makeover Diary: The Start of Something Special With Finnick the Fierce

The day before Thanksgiving my cell phone started blowing up with messages from my group chat. This wasn’t out of the ordinary because me and my three closest friends tend to text all day long. I was just sneaking off to the bathroom of my parents’ house in North Carolina to take a break from the high emotional climate caused by a recent car accident they had no business walking away from.

When I sat down and started reading the messages sent to me, I had 17 unread, half of which were just “JACKIE” in all capital letters. The rest were explaining that Finnick the Fierce was retiring from racing and needed a home. My friends knew I had been opening myself up to the idea of getting a horse of my own, obviously a Thoroughbred, but I wasn’t trying to just go out and find any horse. I wanted something special. I follow a handful of horses which all held that title for me in some way: they were foals I had helped teach to lead, yearlings I held for potential buyers, lay-up horses I flew like kites while working at Millennium Farms, and the like. My dream has always been to follow a horse through their racing career and then give them a soft landing when they would eventually retire.

Finnick was just as special as all of those horses and then some. I had heard stories about him since 2017, when he was foaled at Millennium Farm where I would end up working that fall. Erin O’Keefe landed me that job and through her, I met Paige Gilster, his breeder. I knew Dr. Arnaldo Monge and his wife, Thena, half of Finnick’s racing ownership group, through the same avenues. He was the underdog I’d told my entire family to bet on in the 2020 Kentucky Derby before he was scratched and the horse we rooted for when he came back to racing afterward. This was the story and here was an opportunity presented to me that would allow me to be a part of it, too.

After pacing the bathroom floor and wondering if I could handle the pressure that would come with taking on the retraining of a Derby trail horse, I leaned both hands on the counter and locked eyes with myself. I decidedly slapped the granite before picking my phone back up. I typed out a message to my group chat. “I’m in. Let’s do this.” The Sunday after Thanksgiving I drove seven hours straight to Thena and Arnaldo’s home farm to meet what would become the love of my life.

I felt like I was going for a job interview. I’d only ever actually met Thena in passing, so she wanted to have a formal meeting before she sent her pride and joy to live with someone else. I was on my best behavior. Thena pulled him out of the stall by just his halter and he stood with her in the aisle of the barn as she fed him his favorite, peppermints. He was big and he had a presence about him that I was drawn to right away. From first glance I was in love with him and all I could think was, “Please pick me!”

We all stood on the side of his missing eye, which I assumed would bother him, so I moved to his other side. I said, mostly to myself, “It’s only polite right? You have to look someone in the eye when you meet them for the first time.” It didn’t faze him at all. There were dogs running around barking, my own dog was still in the car barking his displeasure at being left out of the excitement, but Finn was happy as can be standing there scarfing down treats and letting me run my hands all over him. He didn’t have a care in the world and just loved to be around people.

In hindsight, I probably seemed like the least excited horse girl to ever be gifted a well-known Derby trail horse. I didn’t ask questions, I didn’t take pictures, I just circled him, running my hands up and down his legs, under his stomach and through his mane. But my care not to be “too much” was unnecessary. Thena had already decided he would be going home with me. Having Erin O’Keefe and Daniel Schmidt as my references was enough for her, so at the end of our meeting when Erin said, “So …?” I thought she was aiming that to Thena, but all eyes were on me.

A smile spread across my face. I was all in. I wasn’t prepared for how spectacular of a horse he was going to be, but I was ready to devote all of my time and energy into giving him the best life I could, as quickly as possible. Thena said she could bring him over in the following days to the farm where he would live, BTE Stables in Paris, Ky. I hugged Thena and thanked her for giving me the opportunity to make them proud. When I got in my car to finally head home, I didn’t even turn the radio on. I just stared through the windshield in shock.

When he showed up to the farm, I unloaded him from the trailer. We took some pictures which have been spread wider through social media than I’d ever imagined they would. I turned him out in a paddock where he would have his initial let-down until we moved him to a field of the other off-the-track residents. I stood with Thena, Erin, and Daniel as we watched him get settled. Before that moment, I had been too nervous to even think about doing the Retired Racehorse Project’s Thoroughbred Makeover. It felt like something that was out of reach for someone like me, but standing there looking at him, I knew he deserved to continue being a part of something special. So, I turned to my friends and said, “Maybe we’ll do the Makeover.”