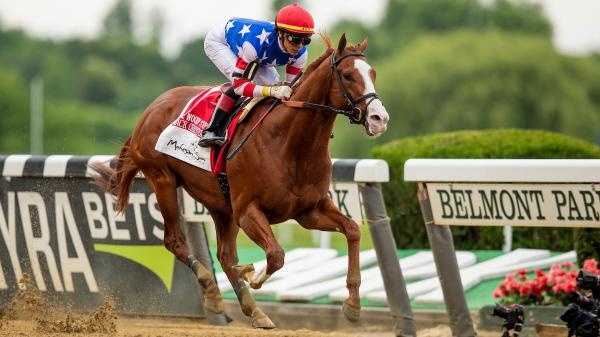 Mo Donegal asserted his superiority over seven rivals in the 1 ½-mile Belmont Stakes Presented by NYRA Bets June 11, but the pecking order within the 3-year-old division is not as clearly established.

If the Donegal Racing and Repole Stable-owned colt holds a divisional lead, it’s tenuous, with other horses such as Klavarich Stables’ Early Voting and RED TR-Racing’s Rich Strike in the picture. Early Voting took the May 21 Preakness Stakes, and Rich Strike upset the May 7 Kentucky Derby Presented by Woodford Reserve before finishing a distant sixth in the Belmont.

Then there are the other leading players in the division, such as Epicenter, second in both the Derby and Preakness, plus Woody Stephens Stakes Presented by Mohegan Sun winner Jack Christopher and Toyota Blue Grass Stakes winner and Kentucky Derby third-place finisher Zandon.

Further behind that group are three Grade 1 winners from the spring who were outrun in the Derby: Taiba, White Abarrio, and Cyberknife. Cyberknife subsequently finished first in the Matt Winn Stakes June 12 at Churchill Downs.

Without a clear leader, what happens in the coming months will determine which horse wins the Eclipse Award as champion 3-year-old male.

“I think, like always, there is no need to rank anybody yet, because what happens in the summer and fall carries a little more weight when it comes to divisional championships,” Mo Donegal’s trainer, Todd Pletcher, said outside his barn the morning after the Belmont. “But I think with his win in the Wood and the Belmont, the fact that he beat the Preakness winner in the Wood, puts him right at the top of the list.”

Surprisingly, Pletcher has never trained a 3-year-old champion during his Hall of Fame career, with his two Kentucky Derby winners and three earlier Belmont Stakes winners getting outvoted by year’s end.

Chad Brown, trainer of Early Voting, Jack Christopher, and Zandon, agrees that racing over the second half of the year will determine the championship.

“I don’t know if it’s important to be the leader now,” he said. “What matters is how it shakes out at the end. It seems a little wide open right now. You have a handful of talented horses who have emerged as the better horses in the crop, but we have a lot of racing to go at various distances and tracks.”

“The wild card is Early Voting,” Brown said. “I’ll see how he trains and discuss all our options with (Klaravich Stables’) Seth Klarman to see as a team which is the best pathway to get him to the Travers.”

The Travers is also on the agenda for Mo Donegal and Rich Strike, their trainers said after noting they exited the Belmont in good condition.

Eric Reed, Rich Strike’s trainer, said his colt would return to his Mercury Training Center base in central Kentucky and train there initially with the goal of the Travers.

Reed blamed himself for advising jockey Sonny Leon to keep Rich Strike in the clear on the outside in the Belmont, feeling in hindsight that the Keen Ice colt becomes more competitive when inside runners, which is how he raced for most of the Derby. Rich Strike was beaten 13 ¼ lengths by Mo Donegal in the Belmont.

“I made a tactical error and messed up. I won’t do it twice,” Reed said. “He fought (Sonny) all the way around there, wasn’t concentrating, and when the running started, he was aggravated.”

Pletcher will also point Mo Donegal, a son of Uncle Mo, to the Travers, known as the “Mid-Summer Derby.”

“I haven’t really talked to the ownership group about it, but both of our Travers winners went through the Jim Dandy,” he said, referring to Flower Alley (2005) and Stay Thirsty (2011). “So, to me, if he has a prep between now and the Travers, that would probably make the most sense.”

Pletcher’s previous two male winners of the Belmont, Palace Malice (2013) and Tapwrit (2017), were both fourth in the Travers. Palace Malice won the Jim Dandy a start before the Travers, while Tapwrit went straight into the 1 ¼-mile race after the Belmont.

Pletcher’s 2007 Belmont winner, the filly Rags to Riches, didn’t return until the Gazelle Stakes at Belmont Park in the fall, finishing second in what proved to be the final start of her career.

Pletcher started a filly in this year’s Belmont as well, and Nest finished a strong runner-up in the race after stumbling at the start. Nest is scheduled to return to competition against fillies at Saratoga, with the Aug. 20 Alabama Stakes “targeted,” potentially preceded by the July 23 Coaching Club American Oaks, Pletcher said.

As for Pletcher, he spent Sunday enjoying the spoils of victory. A group of reporters and photographers awaited him following training in the morning after he took a telephone call from Hall of Fame trainer D. Wayne Lukas, for whom he worked as an assistant before launching his own career in 1996.

Pletcher has matched Lukas with four Belmont victories, most among active trainers.

“I consider him to be the best of all time,” Pletcher said. “So that’s very cool.”–additional reporting by Bob Ehalt