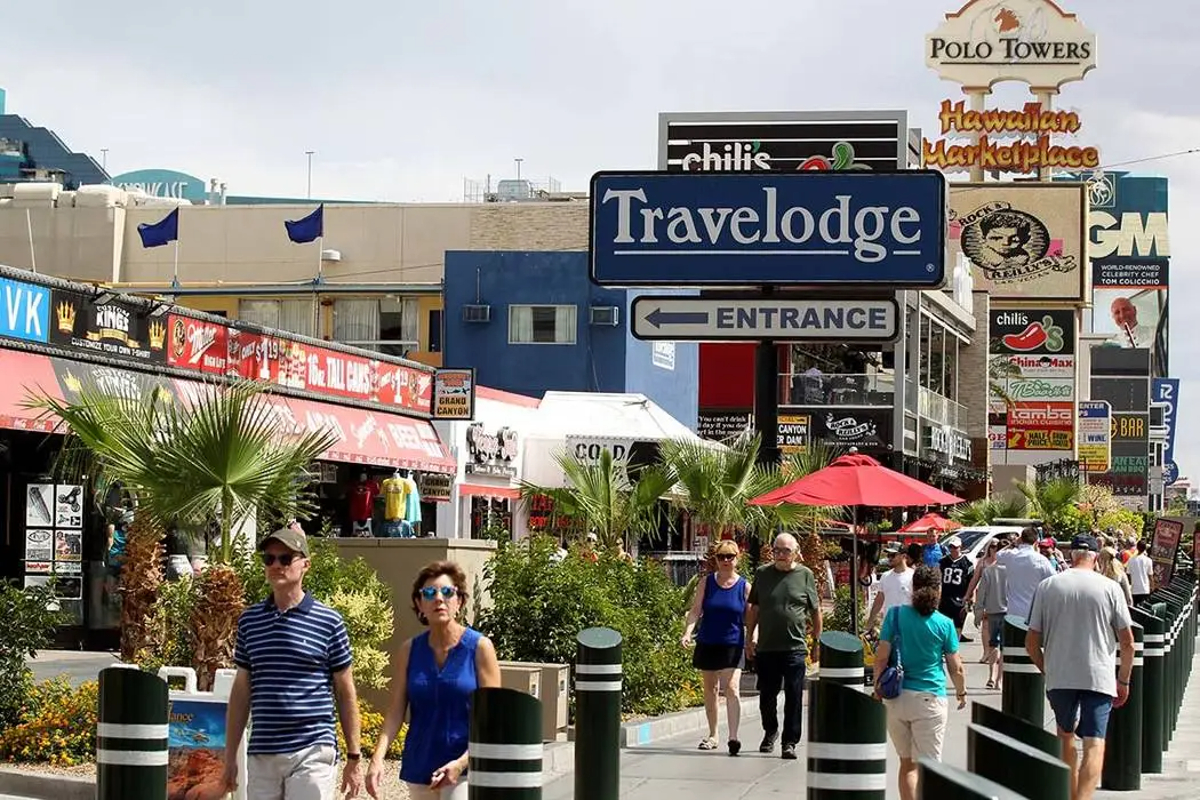 The Travelodge and strip mall on the Las Vegas Strip rumored to be targeted by Tilman Fertitta for a new casino resort is seen in a 2018 photograph. Fertitta has made it no secret that he wishes to own a casino on the Strip. (Image: Las Vegas Review-Journal)

The Golden Nugget casino owner is already invested in downtown Las Vegas. But Fertitta, who also owns the NBA Houston Rockets and Landry’s hospitality and entertainment empire, is rumored to focus on a Strip development.

Casino.org’s Scott Roeben was the first to break the news last month that Fertitta was exploring the Strip as a potential buyer. The Las Vegas Review-Journal has since picked up the scoop and confirmed with its own sources regarding Fertitta’s property hunt.

Roeben reported in March that Fertitta was interested in purchasing the roughly six-acre property at the southeast corner of Las Vegas Boulevard and Harmon Avenue. The site is currently occupied by a Travelodge motel, strip mall, and paved parking lot.

Anonymous sources speaking with the RJ claim Fertitta and property owner Spectrum Group Management have agreed to a sale. The price is rumored to be more than $200 million — or $33.33 million per acre.

Tilman Fertitta is a distant cousin of Station Casinos/Red Rock Resorts’ billionaires Frank III and Lorenzo Fertitta, though their businesses are not intertwined. Forbes estimates Tilman’s fortune at more than $5.7 billion.

The Las Vegas Strip, of course, remains the epicenter of the US casino industry. And the prime drag has recovered quickly from COVID-19, perhaps prompting Fertitta to consider a major investment.

Nevada casinos reported record gross gaming revenue (GGR) last year. Of the $13.4 billion, the Strip was responsible for a little more than $7 billion. That easily eclipsed the Strip’s previous all-time best year of $6.8 billion, set in 2007.

Fertitta’s media contacts have not responded to inquiries regarding the Strip rumors. But Roeben, best known for being the man behind the popular Vital Vegas Twitter account, says his sources for the Fertitta rumblings are reliable.

“Details are few about Tilman Fertitta’s rumored new casino project on the Las Vegas Strip, but you know we’ll pass along anything else we can dig up. This project has not been announced yet, and the rumor hasn’t been officially confirmed, but our sources are bomb,” Roeben wrote.

Strip land is hard to come by. Billionaire Phil Ruffin, who owns Treasure Island and Circus Circus, famously said in 2019 that Strip casinos are “irreplaceable.” That same year, Tilman Fertitta said he, too, was interested in buying on the Strip.

100%, I’m interested,” Fertitta told the Houston Chronicle in 2019 regarding the Las Vegas Strip. “I’ll try to pick off one or two properties.”

The land in question at Harmon Ave. is considered the center of the Strip. The property is directly across from CityCenter, where the luxurious Aria and Waldorf Astoria stand. The strip mall and Travelodge sit between MGM Grand to the south and Planet Hollywood to the north. The Cosmopolitan is also just a short walk north across the Strip.

The luxury-focused area, Roeben believes, will lead to Fertitta creating a new casino concept and brand.

“It will not be another Golden Nugget. Think fancier,” Roeben opined.