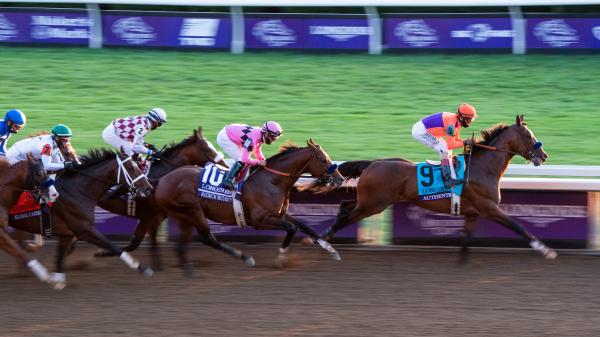 The $6 million Longines Breeders’ Cup Classic is the marquee race of the 14 World Championships races to be held Nov. 4-5 at Keeneland Race Course, and the 1 ¼-mile test also happens to feature horse racing’s brightest star, Flightline.

Every year, I dig deep into the data over the last 20 years of results to try to identify key indicators to help with handicapping races like the Classic, the FanDuel Breeders’ Cup Mile, and the FanDuel Breeders’ Cup Juvenile. Like a stroll back through time, let’s explore previous editions of the Classic from Volponi’s 43.50-1 upset in 2002 to Knicks Go’s front-running romp last year.

Interestingly, none of the last 20 Classic winners was older than 5 – in fact, the Classic has never been won by a horse older than 5 years old since its inception in 1984 – and 3-year-olds have won six times during the last 20 years for a 30% strike rate. The average winning Equibase Speed Figure for the Breeders’ Cup Classic from 2002 through 2021 was 121, ranging from a 113 for Bayern in 2014 to a 130 for Gun Runner in 2017. Seventeen of the last 20 Classic winners were bred in Kentucky with one bred in Maryland, one in Florida, and the other in Argentina.

Does Flightline fit the profile of a typical Classic winner or is he ripe for an upset? Let’s explore.

If you are looking through the list of contenders for the 2022 Classic in search of a winner, the one thing you don’t want to see is a string of up-and-down performances. The key lesson to be learned from the last 20 years of this race: look for a proven elite racehorse in impeccable form, because that is what it takes to win this race.

What about Upset Winners?

I know, I know, we’re all looking for a price and trying to beat the favorite on Breeders’ Cup weekend, and the 2022 Classic probably will have one of the two heaviest favorites at the event in unbeaten superstar Flightline. When you think big upset, you usually think of a beaten heavy chalk, but in the Breeders’ Cup Classic that has not been the case.

What to Look for in a Longshot

If there is an upset in the 2022 Breeders’ Cup Classic, let’s take a look back on some of those from the last 20 years to try to build a profile and/or uncover some common traits.

Is One Running Style Best for the Classic?

No individual running style has dominated over the previous 20 editions of the Classic nor has any style been completely ineffective, but tactical speed seems to have become more important in the Classic over the last 10 years.

Flightline perfectly fits the profile of a Breeders’ Cup Classic winner as a multiple Grade 1 winner with two wins in as many starts since June, tactical speed, and dazzling speed figures in his recent wins. He will be very short odds for a good reason and would be a win candidate even if he does not run his absolute best – he’s that fast.

In the event that Flightline comes up short in the Classic, that opens it up to several top contenders with Runhappy Travers Stakes winner Epicenter, multiple Grade 1 winner Life Is Good, and Pennsylvania Derby winner Taiba probably vying for second and third betting choice in the Classic wagering. All three are proven Grade 1 winners and should be well-supported behind Flightline.

I have my concerns about the 1 ¼-mile distance for Life Is Good, but last year’s Big Ass Fans Breeders’ Cup Dirt Mile winner has early speed, four career Grade 1 wins, and he’s 3-for-3 since June.

Likewise, Epicenter is 2-for-2 since running second in the Kentucky Derby Presented by Woodford Reserve and Preakness Stakes in the spring, and you can make a very strong case that his 5 ¼-length romp in the Travers was a major step forward. With just a bit more improvement in the fall of his 3-year-old season, a time period when sophomores often really start to come into their own, Epicenter would very likely be the primary threat to Flightline. He has won setting the pace but now relaxes better early in races and profiles more as a stalker.

Hall of Fame trainer Bob Baffert has won four of the last eight editions of the Classic, including four of the six 3-year-old winners in the last 20 years: Bayern (2014), American Pharoah (2015), Arrogate (2016), and Authentic (2020). In two starts since June, lightly raced Taiba has run second by a head in the Grade 1 TVG.com Haskell Stakes and won the Grade 1 Pennsylvania Derby by three lengths, making this improving 3-year-old with tactical speed from the Baffert barn a serious player in the Classic.

If you are looking for a price, a pace meltdown could set things up for 80.80-1 Kentucky Derby winner Rich Strike, but his past performances show far more inconsistency than you typically see from a Breeders’ Cup Classic winner. Haskell winner Cyberknife actually fits the profile better with two wins, a second, and a third in four races since June and the price should be terrific … if he runs in the Classic (trainer Brad Cox told reporters last week that he was planning to enter Cyberknife in the Big Ass Fans Breeders’ Cup Dirt Mile).

Another potential longshot I would not rule out is Hot Rod Charlie, who is a proven Grade 1 winner coming off a Grade 2 win with three top-three finishes in as many starts since June. He also finished second at 94.40-1 odds in the 2020 TVG Breeders’ Cup Juvenile Presented by Thoroughbred Aftercare Alliance on this main track at Keeneland. ‘Hot Rod’ almost never runs a bad race and has posted some big speed figures, plus he has the tactical speed that has been very successful in the last 10 years. He’ll very likely be my prime longshot play.