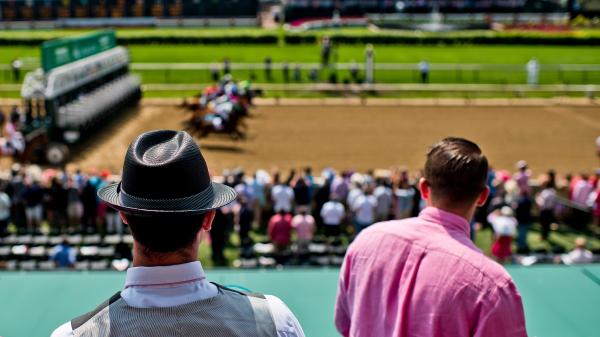 The spring-summer 2022 meet at iconic Churchill Downs is eagerly anticipated for a number of reasons, starting of course with the 148th running of the Kentucky Derby Presented by Woodford Reserve on May 7.

Beginning on opening night, April 30, Kentucky Derby week at Churchill promises to be a singular event that brings the full experience of horse racing – elite competition, high and unique fashion, profligate spending on food, drink, and accommodations, and endless revelry – to the throngs who flock to the track at 700 Central Ave.

After the masses have departed, however, Churchill still will have plenty to offer horseplayers as it eases into a schedule of four to five days per week through the July 4 holiday. Read on for a preview of the spring-summer meet with some tips to keep in mind when handicapping the races under the Twin Spires … for Derby week and beyond.

Churchill’s historic main track is a one-mile oval with one of the longest homestretches in North American racing (1,235 feet). Races at seven furlongs and one mile are run out of a chute. The turf course will be brand new for spring 2021 (see below); it is still seven-eighths of a mile situated inside the dirt oval but will be widened from 80 feet to 85 feet, allowing for additional rail movement if necessary.

Churchill’s opening-night card April 30 kicks off at 6 p.m. ET, and the track will then hold three popular cards on Tuesday (Champions Day), Wednesday, and Thursday (Thurby, the locals’ favorite), with first-race post times of 12:45 p.m. ET each day. First post is 10:30 a.m. ET for both Longines Kentucky Oaks day on Friday, May 6, and on Derby day, with 13 races slated for Oaks day and 14 for Derby day.

After that, Churchill will race on a Thursday-to-Sunday schedule through June 5 and then add four Wednesdays starting on June 8, with special race days on Monday, May 30 (Memorial Day) and Monday, July 4 (Independence Day and closing day of the meet). Post times for the first race on Wednesdays, Fridays, Saturdays, and Sundays as well as the two holidays are 12:45 p.m. ET except for two “Downs After Dark” Saturday cards May 14 and June 18 which will begin at 6 p.m. ET.

On Thursdays (except for Thurby), Churchill presents “Twilight Thursdays,” offering food and drink specials and live music. Those cards run from May 12 through June 30 and begin at 5 p.m. ET.

Churchill Downs offers a full menu of wagers on most racecards, with rolling daily doubles and Pick 3s joining the usual win-place-show and exacta, trifecta, and superfecta bets. A Super High 5 bet is added to the final race of each card (requiring the bettor to pick the first five finishers of the race in order).

Each card during the meet will also feature at least two Pick 4 and Pick 5 wagers apiece as well as the Derby City 6, where the bettor must pick winners in six races in a row with a 20-cent minimum. The full pool in the Derby City 6 is only disbursed if there is one winning ticket; if there are multiple tickets with six winners, 90% of the pool is paid out and 10% rolls over to the next card.

In addition to the regular fare, Churchill will offer several special bets for Oaks and Derby days. There’ll be the popular Oaks-Derby daily double (picking the winner of both races) as well as a Pick 3 for the Oaks, Old Forester Bourbon Turf Classic Stakes on May 7, and Derby. Also, Churchill will offer a $2 Pick 6 spanning both Oaks and Derby days, with six races on Friday’s and Saturday’s cards to be announced. This wager has a $2 minimum as indicated and is separate from the Derby City 6. As per a release, Churchill also plans to hold an all dirt-stakes Pick 5 on Derby day and an all 3-year-old Pick 3 on the May 7 card featuring the American Turf Stakes, Pat Day Mile Presented by LG&E and KU, and Kentucky Derby.

Last summer at Saratoga, Steve Asmussen became the all-time winningest trainer in North America when his 2-year-old Stellar Tap won his debut. Asmussen has amassed 9,720 wins through April 25, and 821 of those have come at Churchill Downs, most among trainers in the track’s storied history.

Asmussen finished first in wins for Churchill’s fall meet and has amassed 25 meet titles during his Hall of Fame career. He’ll be in the running for another title this spring, but should face a stern challenge from Brad Cox. Cox, the current Eclipse Award-winning trainer and a Louisville native, has over the past five years or so soared up from the claiming ranks to condition horses for some of the sports’ bluest of blueblood owners. He finished first in wins for Churchill’s spring 2021 meet, and one of those victories turned out to be by Mandaloun, who was made the winner of the Kentucky Derby after Medina Spirit was disqualified.

The jockey colony at Churchill will truly be a tale of two meets: Derby week and then the two months after. Most of the leading riders in North America will be in town through May 7, squaring off in stakes, high-quality allowance races, and maiden races. Flavien Prat and Irad Ortiz Jr., both coming off of successful meets at Keeneland, figure to reach the winner’s circle several times in Louisville before they and several others depart for Belmont Park after the Derby.

From mid-May to July 4, the competition for the meet’s leading jockey still should be heated as a host of familiar names and a new face or two go at it. Tyler Gaffalione was also was among Keeneland’s leading riders this spring, and he has finished first in wins for six consecutive meets at Churchill. Gaffalione is a good bet to do that again, but will have competition from mainstays Corey Lanerie, Brian Hernandez Jr., Julien Leparoux, James Graham, and several other veteran jockeys. Ricardo Santana Jr. should also be a regular presence at Churchill after Oaklawn Park’s meet concludes, and Umberto Rispoli announced plans to ride in Kentucky this spring and summer after building a reputation as a top-notch turf jockey in California over the past couple of years.

Churchill’s main dirt track is regarded as one of the best maintained – and fairest – in North America. Races are often “formful,” meaning the pace setup and finishing order in the stretch closely mirrors how they project to play out when reading the program or Daily Racing Form. For both sprints and routes, controlling speed can be very dangerous.

As for Churchill Downs’ turf course … cue some Final Jeopardy music, because questions about it have yet to be answered. Churchill’s turf course has been completely replaced, with work occurring last summer and fall (grass racing was not held during September and November) under the supervision of a United Kingdom-based group that has worked on world-renowned courses including Ascot Racecourse and also consulted on maintenance for tennis courts at Wimbledon and soccer pitches for FIFA World Cup matches.

Churchill’s prior Matt Winn turf course had caused problems in recent years during both extended dry periods and spans with regular precipitation, and anticipation is high from all corners (horsemen, owners, jockeys, handicappers) for a much-improved course starting this spring.

The new turf course will be wider and is comprised of Tahoma 31 Bermudagrass overseeded with ryegrass, which doesn’t sound like something Carl the Groundskeeper (as portrayed by Bill Murray in “Caddyshack”) would play golf on but has a nice ring to it nonetheless. The turf course is set to debut on opening night with the seventh race.

The bulk of Churchill’s graded stakes are frontloaded during the meet, with seven of them on Friday, May 6, highlighted by the $1.25 million, Grade 1 Longines Kentucky Oaks for 3-year-old fillies, and then seven more the following day, ending with the $3 million, Grade 1 Kentucky Derby Presented by Woodford Reserve. The other big cards during the meet are Saturday, June 4 – Stephen Foster Stakes Preview Day, featuring six stakes – and then Stephen Foster Day itself on July 2, the final Saturday of the meet. The $750,000, Grade 2 Stephen Foster Stakes for older dirt horses is the showcase of what should be a fantastic day for betting that features eight total stakes races.

Racing from Churchill Downs will be showcased on “America’s Day at the Races” throughout the spring-summer meet. The NYRA-produced show, which also shows live racing from Belmont Park, will air primarily on FS2 and occasionally on FS1.