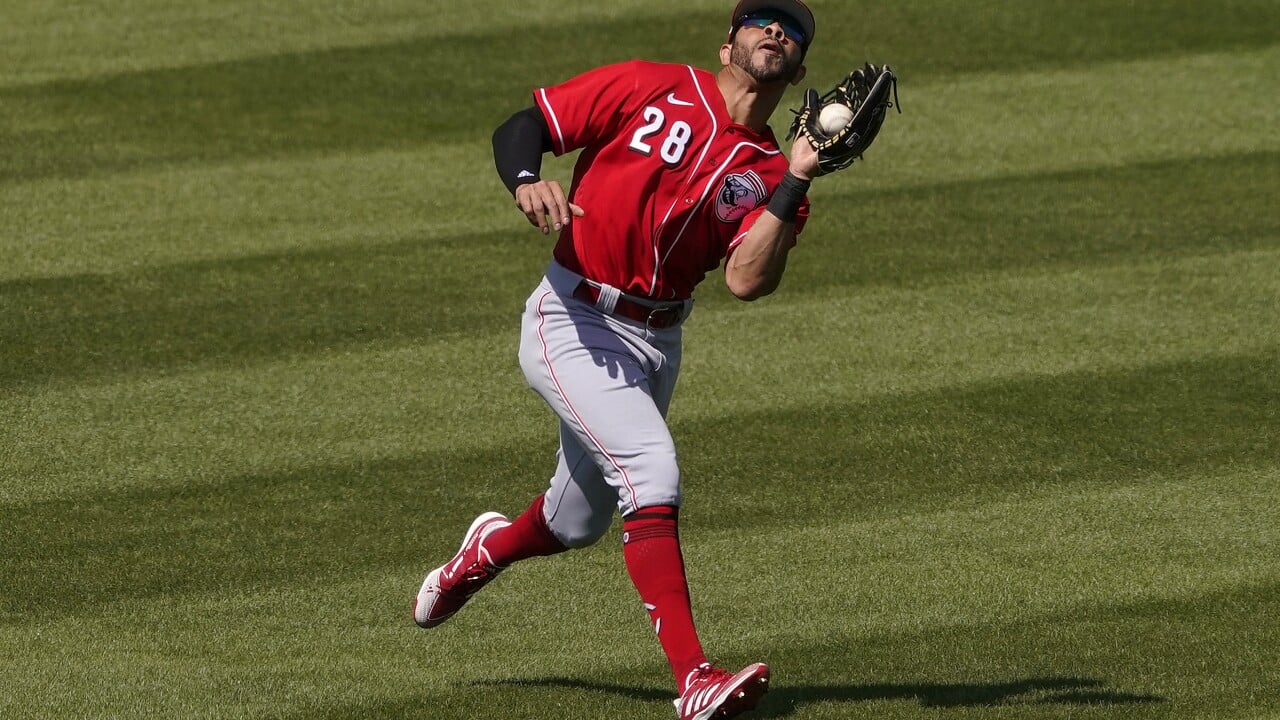 Tommy Pham considers himself to be a Vegas high roller, and the Cincinnati Reds outfielder takes his fantasy football seriously. So much so that MLB suspended him three games on Saturday after he slapped San Francisco Giants outfielder Joc Pederson over a disputed transaction in their league.

Cincinnati Reds outfielder Tommy Pham catches a fly ball during a spring training game earlier this year. On Saturday, MLB suspended him for three games and fined him an undisclosed amount for slapping San Francisco Giants outfielder Joc Pederson during pregame warmups on Friday. The altercation stemmed in part from a disagreement the two had in their fantasy football league. (Image: Matt York/AP)

The suspension was retroactive to Friday, which is when the incident occurred, because the slugger turned slap hitter sat out that night’s game. The league also fined Pham, though it did not disclose the amount.

The ruckus during the pregame warmups led to players from both sides running to the outfield. However, nothing else happened. Pederson told reporters after Friday’s game the two were part of an ESPN fantasy league. However, they don’t really talk to each other.

The disagreement stemmed from a move Pederson said he made to put a player on injured reserve after he had been ruled out for that week. After some accused him of stashing a player, Pederson screen captured the league’s rules and posted them in a group text message with other team owners.

That was more than a year ago. And while most would just let the incident go after such time, Tommy Pham isn’t most people.

“There was no real argument,” Pederson said. “He kind of came up and said, ‘You remember from last year?’ And I was like, ‘Fantasy football?’ He’s like, ‘Yeah.’”

And then it was on like Donkey Kong. At least from Pham’s perspective.

Pederson said he just walked away.

“I didn’t get emotional and don’t think violence is the answer, I guess you could say,” he added.

‘Too Much Money on the Line’

Pham didn’t make any comments on Friday, but the Cincinnati Reds player more than made up for it on Saturday.

In comments to C. Trent Rosecrans, Reds beat writer for The Athletic, and Evan Webeck, Giants beat writer for the Bay Area News Group, Pham admitted to slapping Pederson. He said it was about the fantasy football league as well as some posts Pederson made about Pham’s old team, the San Diego Padres.

We’ve got too much money on the line,” Pham said, according to the Bay Area News Group. “I look at it like, there’s a code. If you’re (messing) with my money, you’re going to say some disrespectful (stuff), there’s a code to this. … This was strictly about winning some money, gambling. … There’s a lot of money on the line. I’m a big dog in Vegas. I’m a high roller at many casinos. … If you lost, you had to pay double, so I looked at it like he was (messing) with my money, along with the disrespect.”

After Saturday’s game, Pederson said he sent a GIF image to the fantasy football chat group that was supposed to be a lighthearted dig at the Padres to which Pham took umbrage. He added that Pham eventually dropped out of the fantasy league.

Fantasy Football Not Against MLB Rules

While MLB has a longstanding rule against betting on baseball games, that does not extend to betting legally or playing fantasy games on other sports.

Pham will conclude his suspension on Sunday, when the three-game series with the Giants ends.