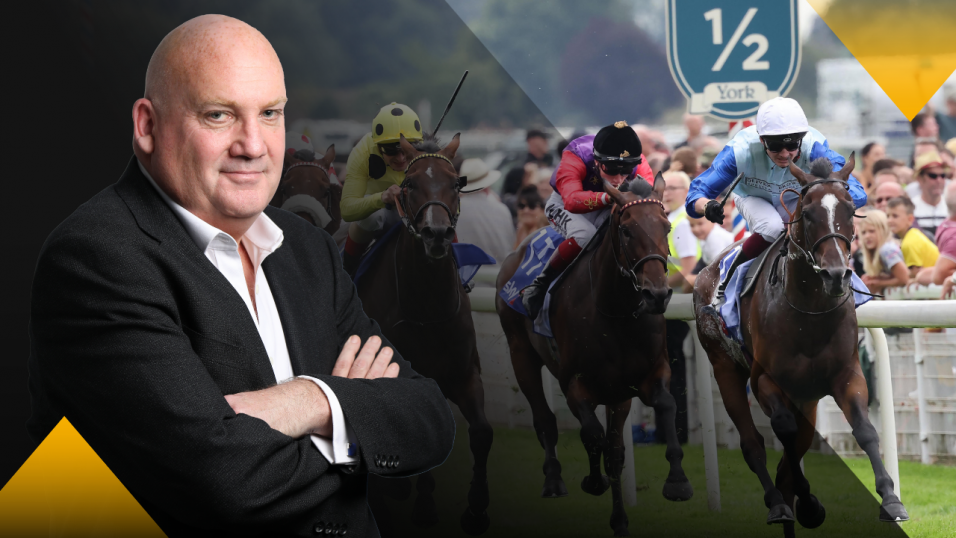 Like most I suspect, I am happy to ignore the six-runner ITV filler from Newton Abbot, and concentrate on the five York races, which I will take in chronological order.

The opener is a competitive 11-runner 1m3f188yd handicap at 13:50 but that didn’t stop the Betfair Sportsbook installing William Haggas’ Gaassee as just a 9/4 chance as he bids for a four-timer.

He holds a Group 2 Hardwicke entry and could easily be a cut above this field off a mark of 94 given his sexy, unexposed profile. His Kempton win in December has worked out very well, too. But you won’t find me backing these types at skinny prices too often, if at all, however much you have to fully respect his chances.

You only have to hark back to last year’s race, which Haggas took with a very similar 7/2 chance in the three-length winner Ilaraab, running in the same colours, to tell you as much.

The solid handicapper against him is Sam Cooke, and this one actually traded at 2.1211/10 in running when beaten 10 ½ lengths by Ilaraab in this contest last year. He was far too free that day though, and paid for it close home after still being in front approaching the final furlong pole.

He finished the season in great style but the problem with him is two-fold: he races off a career-high mark here and his trainer Ralph Beckett has yet to really hit his stride this season.

If you want to back them win-only on the Sportsbook and get filled immediately they are 20/1 and 25/1 there as well, so make your choice.

Unlike Beckett, Alan King is in decent form under both codes, and he saddled a 20/1 winner at Chester last week.

His On To Victory has questions to answer here as he has not raced since Boxing Day over jumps and I presume he has had a setback since, but hopefully the Henry Ponsonby syndicate haven’t entered him solely for the entrance and O &T tickets here and he is primed for this.

The horse ran a good third over course and distance in August 2020 after a similar absence from a National Hunt campaign and then he went on to win the November handicap (off just 1lb higher mark than this) and run a cracker to finish second to Hukum in a Listed race at Goodwood in May 2021.

He is very fairly handicapped on that run and hopefully Kings Prince and Zabeel Champion will inject the pace into the race he needs.

It is currently good at York, which would be okay for him, but a bit of ease would be better, and hopefully they will get more than the spits and spots they have forecast on the site I use.

Terry Kent hasn’t had a Flat winner since February, which isn’t an obvious pointer to Graphite’s chances, but he doesn’t have a big string and he had a 28/1 chance beaten just ¾ length at Ascot on Friday and three of his other six runners of late have been placed.

So I’d say he is actually in fair form.

Graphite was a decent Group 3-level horse when trained in France and took a couple of runs to come to himself last season. But he won a Shergar Cup handicap at Ascot off just a 3lb lower mark than this under today’s jockey David Egan (on board for the first time since here) and ended off last season with a good sixth at 40/1 in the Doncaster Cup.

He handles quick ground as well as soft, and he simply looks overpriced from a form and time perspective.

Wager on a big run from Mr Wagyu

I think we have all learned by now that any confidence is sorely misplaced when tipping and betting in sprint handicaps but surely everything points to a big run from Mr Wagyu in the 14:25.

Back him at 12.011/1 or bigger to small stakes. His trainer John Quinn is in very lively form too, and was among the winners again on Monday.

To start with, his course and distance form figures of 171246 are not too shabby when you are dealing in double-digit handicaps most of the time, and he is already 1lb lower than when third in the Ayr Gold Cup just four starts ago.

But the fascinating aspect to his chances here, aside that course form and a fair handicap mark, is his second-time out record in recent seasons, and he undoubtedly shaped well when a friendless 40/1 chance on his return at Newmarket at the start of the month.

In 2020, he won second time up, with just a six-day gap in between those races, and last year he was beaten just a length when turning out again just 10 days after his campaign pipe-opener.

His Newmarket run was just 12 days ago and hopefully this has been the plan for a while. The Sportsbook are 10/1, five places, if you want to back him each-way but I suggest win-only in this 22-strong handicap.

I nearly went with a saver on Wobwobwob at 18.017/1 or bigger as he won well over 7f at this meeting last season and he shaped well for a 7lb claimer on his return over 6f at Thirsk last month. However, he is drawn one on the far side, and that carries with an obvious, and considerable, possible downside.

Garrus has got it all

The 6f Group 2 sprint at 15:00 (I will leave others to comment on the nonsense around the Duke Of York race title) is not normally a race that I would get involved in, but surely Garrus is a fair each-way bet at 12/1 with the Sportsbook.

I am tipping and backing him anyway. To put it simply, he just looks very solid.

He has won at the track, he has his conditions, he arrives here after having been beaten just a short-head in the Group 3 Abernant last time, and he has little to find with the form horses, two of whom (Dragon Symbol and Minzaal) are making their reappearances.

The first-time blinkers are an interesting addition too, as he plucked defeat out of the jaws of victory at Newmarket in the centre of the track (traded at 1.061/18), and he looks a sturdy bet to hit the frame at least.

I have had a nibble on Beckett’s course winner Luna Dorada at 50s for the Oaks but I suspect they could all be fighting for second place behind Emily Upjohn in the Musidora at 15:35.

Back Mojomaker to pass stamina test

Gosden also supplies a shortie in the shape of the unbeaten Samburu at 13/8 in the 16:10, but I am throwing a few pounds in the direction of Mojomaker each way at 8s.

David Loughnane is another trainer going well at present and Mojomaker ran a cracker for him over 6f at Doncaster last time, his first run after a wind op, when going down by a mere nose, going on strongly at the line.

The winner was completing a hat-trick there, the third went into the race on the back of a five-length victory and the fourth ran well in defeat at Ascot last week, so I think he remains well handicapped on a 3lb higher mark.

He ran well at this course in a valuable sales race here last season and the step back up to 7f looks worth chancing after the Donny run, for all he does have to conclusively prove he stays this trip. The stamina is the doubt (though the pedigree gives you hope, if not necessarily his sole run over 7f at Southwell), so I considered win-only, but I want the places on my side here.

Profit and Loss (from March 26)

2022-05-09
Previous Post: How Much Money Can You Make Streaming Poker on Twitch?
Next Post: Hard Rock partners with Red Bull Racing on fan experiences, branding ahead of Miami Grand Prix debut