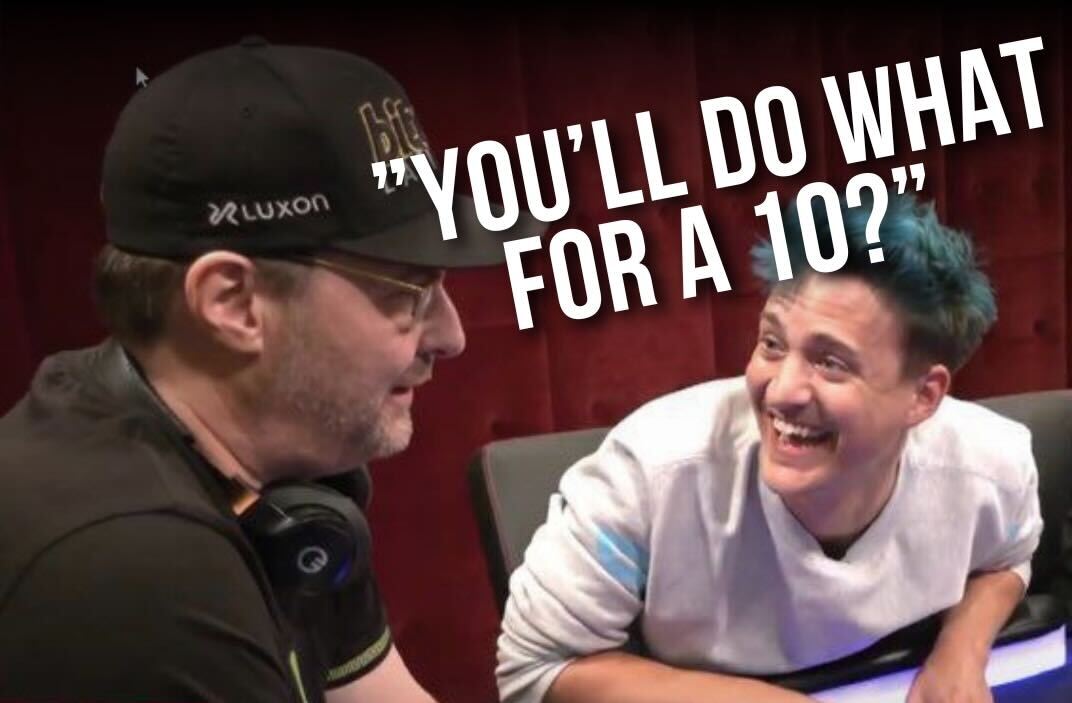 What an epic year it’s been for Hustler Casino Live, far and away the most popular live-streamed poker show in the world. Massive pots, arguably the most memorable hand in modern poker history, Phil Hellmuth receiving what some might consider karma, a tight-imaged player pulling off an insane bluff, and a hero getting revenge on a villain. That sums up the five hands you’re about to see.

The most entertaining pots of the year are, admittedly, subjective. Hustler Casino Live has produced far too many memorable moments over the past year to truly narrow it down objectively, but we were able to narrow it down to what we felt were the absolute best of the best.

HCL’s Twitter account asked fans to name their top hands of 2022, and the responses were all over the map.

Some of the hands that were mentioned and deserve recognition but didn’t quite make our list include Mikki Mase bluffing Garrett Adelstein with 4-5 and then showing the bluff, Adelstein folding kings on a dry board to the pocket aces of Andy “Stacks” Tsai, Wesley Fei winning with set-over-set against Adelstein and then needling his opponent after scooping the huge pot, and many other great ones.

« I will suck your dick for a 10 » # Ninja Vs Phil Hellmuth cette nuit en cash game Highstakes https://t.co/Xf6I4PeHLO

Back in May, Hustler Casino Live hosted its most memorable and arguably its best game when it brought on YouTube and Twitch celebs such as MrBeast and Ninja to face Hellmuth and Tom Dwan in one of the wildest games you’ll ever see. The game reached over 100,000 concurrent viewers, easily a live-streamed poker record.

Hellmuth, one of two pros in the game, was heavily criticized for buying into the high-stakes table short-stacked against a bunch of recreational players who were splashing around. With

on the turn gave the Twitch video games streamer a glimmer of hope to chop.

Guess what card came on the river? Yep, the magical 10-ball that created perhaps the most memorable chop pot of the year in all of poker.

“Ninja, are you staying true to your word?” MrBeast asked.

Bill Klein, a wealthy charitable businessman, is one of the most respected high rollers in poker. But the recreational player has a tight image at the table. He used that to his advantage during an October pot in perhaps the bluff of the year.

Brian Kim raised to $1,000 with a $400 straddle from middle position. Action folded to the straddle, Klein, who just called with

, proving the tight image is justified.

paired the board on the turn, Kim continued to build the pot, this time wagering $4,000. Not a believer, Klein made the call and saw the

on the river. He made a surprising decision to lead out, putting $13,000 into a pot of about the same size.

Kim, only worried about his opponent having a 5 or pocket 10’s, sensed he was in great shape, so he went for a raise to $50,000, leaving around $77,000 behind. Klein, who had him covered, shocked Hustler Casino Live commentator Marc Goone when he three-bet it to $127,000, a gutsy play from a player who isn’t known for making such moves.

Kim would eventually decide on a fold, allowing the tight-imaged Klein to take down the pot and pull off one of the best bluffs of the year.

Late in the year, Alan Keating, one of the most popular plays on the show, won the largest pot ever streamed in US poker history for nearly $1.2 million. The hand was played against a player named “Handz” who attempted to turn his ace of spades blocker into a bluff on the river, but he couldn’t convince his opponent, holding a king-high flush, to fold.

Here’s how the hand played out: Handz raised to $9,000 on the button with

and “Blank Check Ben” called with

in the small blind, as did Eric Persson, holding

, in the first straddle. Keating, the $1,600 straddle, wasn’t going anywhere with

and the four players saw a flop of [5d10s6], which was really only welcoming to Keating, who picked up a flush draw.

Action checked around to Handz, who hoped to take it down with an aggressive $25,000 bet, but the big draw wasn’t going anywhere. The turn was the

and Handz ripped off another large wager, this time for $70,000. Once again, the bet didn’t scare his opponent away.

Off to the turn the heads-up players went, which was the

, completing the flush. Keating decided to lead out this time and represent a big hand, which he indeed had, betting $155,000. With nothing but a small pair on a four-to-a-straight board, Handz made quite the gutsy play as he jammed all in for $465,000, and was barely covered.

Keating tanked for a couple of minutes but eventually made the call to win a pot of over $1.15 million, the largest ever on stream in Hustler Casino Live and US poker history.

Back in February, Dylan Gang slow-rolled Adelstein in a $200,000 pot, but his opponent didn’t give him much of a negative reaction. Instead, he quietly awaited his opportunity to enact revenge.

Gang exited the game a six-figure loser and hasn’t appeared on Hustler Casino Live since. Ironically, his opponent in this very hand has also been absent from HCL for quite some time (see below).

There probably won’t be many debates as to which hand should be in the top spot. That’s because the hand we’re about to discuss very well may have been the most viewed hand in poker history, not just on Hustler Casino Live.

On Sept. 29, Adelstein moved all in with

and was mysteriously called by the

of recreational player Robbi Jade Lew, who was making just her second appearance on the show.

After the river bricked out twice, giving Lew the pot, Adelstein snapped and accused his opponent of cheating. He couldn’t believe that anyone could possibly make such a call with jack-high and no draw.

The cheating accusations created the wildest banter ever on poker Twitter. Even the mainstream media such as Yahoo!, the Los Angeles Times, and the New York Post picked up the story.

It’s never been proven that Lew cheated, nor has it been proven that she didn’t. Thousands of poker players have accused her of nefarious behavior, but there are also as many or more who believe she’s innocent. Shortly after the hand, Lew returned $135,000 to Adelstein to, as she claims, defuse the situation.

We may never know the truth, and we also may never get to see Adelstein, the most popular regular on the show, return to the Hustler Casino Live stage. His reputation as one of the classiest players in the game has taken a hit by those who believe she didn’t cheat and that he “bullied” her into paying him back the money.

The long-time Los Angeles high-stakes poker legend has stuck to his belief that she cheated.