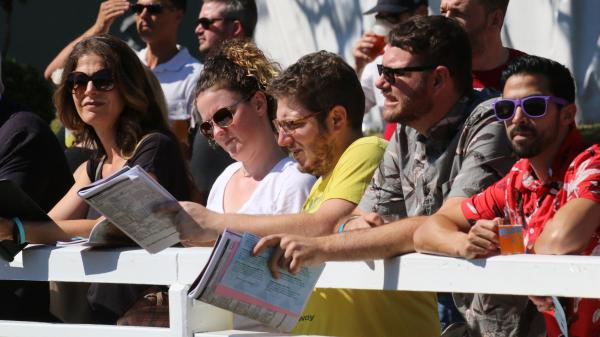 Saturday’s $100,000, Grade 3 Autumn Miss Stakes at Santa Anita Park brings together a field of eight 3-year-old fillies traversing a mile on the turf. Six of the eight have won either their most recent race or the one right before that, and all eight fillies have been stakes-placed at least once to date.

Madone is the most accomplished in terms of earnings at $367,800. She earned some of that bankroll winning the Grade 2 San Clemente Stakes at a mile in July, the same distance she’ll try again in the Autumn Miss. Spanish Loveaffair is also a stakes winner, winning the non-graded Pebbles Stakes last month in New York (she also finished first in the Grade 3 Herecomesthebride Stakes in February but was disqualified). Zero Tolerance stretches out to a mile off a win in the Unzip Me Stakes over this course just 27 days prior to Saturday and is tied for the most lightly raced filly in the field, having run just three times. Ego Trip is the other filly making just her fourth career start; she finished third in the Grade 2 Lake Placid Stakes in August, which was her most recent race. Eddie’s New Dream finished second in the Melair Stakes on dirt in June and recently won strongly on the grass, while Freedom Flyer missed by a head in the California Oaks this past April. Burgoo Alley was third behind Zero Tolerance in the Unzip Me and also stretches out, having won at a mile on turf just before that start. Javanica missed by less than a length in both the Grade 3 Jimmy Durante Stakes and the Blue Norther Stakes last November and December and returns from two months off following a sixth-place effort in the Grade 1 Del Mar Oaks.

I believe strongly Zero Tolerance is the one to beat in this year’s Autumn Miss Stakes, even over multiple stakes winner Madone. Zero Tolerance missed by a nose in a big effort when rallying from eighth of 10 in her career debut this past August in a turf sprint. Improving nicely 19 days later, she won on dirt then moved back to turf for the Unzip Me Stakes on Oct. 3 at the distance of 6 ½ furlongs. In the Unzip Me, Zero Tolerance rallied from sixth of seven in the early stages to win going away. That effort earned her a career best 98 Equibase Speed Figure and if she makes a logical improvement in only the fourth start of her career on Saturday, it would put her at, or above, the 104 field-high figures Spanish Loveaffair earned winning the Pebbles Stakes and Madone earned winning the San Clemente Stakes. There is no doubt in my mind Zero Tolerance can stretch out to a mile and run a winning race, given that her dam Torreadora also produced multiple stakes winner El Tormenta, who won the 2019 Grade 1 Ricoh Woodbine Mile Stakes. Santa Anita’s leading jockey Flavien Prat was in the saddle as Zero Tolerance won her last two races, and he rides back Saturday. That is another reason this filly gets top billing.

Madone has won five of nine races in her career, including two of three on the Santa Anita turf and four of eight stakes tries. Her best effort came in July when she won the San Clemente Stakes at the distance of the Autumn Miss and earned a career-best 104 figure. However, her most recent two races were some of her poorest efforts as she finished fifth in the Del Mar Oaks and then fifth again in the Jockey Club Oaks Invitational last month in New York. Then again, neither of those was held at a mile, the distance of the San Clemente which Madone returns to. Additionally, the Del Mar Oaks was a Grade 1 race and although not yet graded, the Jockey Club Oaks is going to be a Grade 1 race in the future. As such, the drop to the Grade 3 level in the Autumn Miss, and the return to a mile and to a turf course she has had success over in the past bode well for Madone regaining top form.

Honorable mention goes to Burgoo Alley and Javanica, and I would consider both for any exacta tickets played. Burgoo Alley won at Santa Anita in a turf sprint this past June, making her second start since importing from Ireland. She stretched out to two turns next and ran two “A” races in a row, first losing by a head with a 101 figure and then winning an allowance race at a mile with a stakes-quality 103 figure. She then stumbled at the start of the Unzip Me to be last of seven, was rushed up to third, fell back to fifth, and then re-rallied for third. Javanica finished second in a pair of stakes last fall and winter on this circuit with big efforts and then tried dirt in the Santa Anita Oaks. When that experiment failed, she moved back to grass for the Senorita Stakes at a mile on turf in May (won by Madone) but ran into a ton of traffic trouble and was eventually moved up from sixth to fifth after another horse was disqualified for interference. Returning in July, Javanica earned a career-best 101 figure with a win in an allowance race but then faded to fifth after leading from the start in the Del Mar Oaks. Freshened again, she has potential to run as well as she did in July and could be a contender.