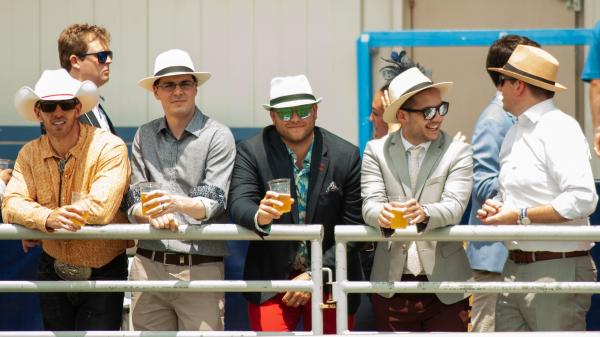 The $175,000, Grade 2 Bessarabian Stakes Saturday brings together a strong field of nine fillies and mares running seven furlongs on the all-weather Tapeta surface at Woodbine. All seven finished third or better in their most recent races, with five emerging victorious in those starts over the past two months.

Both Aug Lutes and Our Secret Agent earned their recent wins in stakes races: Aug Lutes’ win came in the Glen Cove Stakes at the distance of the Bessarabian Stakes but on turf; while Our Secret Agent won the Hendrie Stakes on Woodbine’s Tapeta track at the slightly shorter distance of 6 ½ furlongs. Gidgetta ships into the barn of top trainer Josie Carroll after having won on turf in California last month in a very highly-rated race, which suggests she fits with these. Lady Speightspeare, who is undefeated in three starts, won the Grade 1 Natalma Stakes on grass in September 2020 and then returned from nearly a year away from the races in September to win easily. Emmeline may have just earned her first career win last month in her ninth career start but she finished second in both the Bison City Stakes and Woodbine Oaks prior to that, so she’s another contender who appears to fit on all counts in this field. Juxtapose enters the race off a third-place finish in the Grade 3 Ontario Matron Stakes four weeks ago, and she leads the field in career wins with six, from 13 starts. La Libertee finished third in the Hendrie Stakes behind Our Secret Agent after a troubled start and can improve. Spun Glass ships in from Maryland for trainer Michael Trombetta, who also saddles Aug Lutes, and she won the only time she raced on an all-weather surface previously. Last but certainly not least is Tuned, who just won the All Along Stakes on turf at Laurel Park for her third straight win.

Even with so many of the entrants proven in stakes or entering Saturday’s race off top efforts, Aug Lutes and Gidgetta appear to have a significant edge over the rest based on their most recent efforts. Aug Lutes gets slight preference between the pair, not only because she has won four of five career races and finished second in the other, but because she’s on a pattern for significant improvement off a career-best 102 Equibase Speed Figure earned last month when she posted a 19.60-1 upset in the Glen Cove Stakes at Belmont Park. That race, her first ever on turf, was run at the same seven-furlong distance of the Bessarabian, and right before that Aug Lutes rallied from tenth to second in the Duchess Stakes going seven furlongs on the Tapeta main track at Woodbine. Jockey Antonio Gallardo, who is one of the top jockeys at Woodbine, rode Aug Lutes to a win at Presque Isle Downs in September, which followed a 10-month layoff, and he rode her again in the Duchess. She’s likely to take another step forward as a lightly raced 3-year-old building on the pattern of figures from 88 to 95 to 102, and she’s proven that she loves the all-weather main track surface. Aug Lutes may be very tough to beat in this race.

That being said, Gidgetta may give Aug Lutes all she can handle in the Bessarabian if she takes to the surface. She appears to have an affinity for it based on her two recent workouts after shipping in from California. Never worse than third in four sprint races this year on turf, Gidgetta earned a career-best 108 figure when finishing second in May in a turf sprint allowance at Santa Anita Park. Two races later she earned a 105 figure in another turf  sprint before posting a 104 figure effort when winning yet another turf sprint by a nose last month. Owned and bred by famous sports radio host Jim Rome (Jungle Racing), Gidgetta is showing every sign of running as well on the Tapeta all-weather surface as she did on turf. In her first local workout on Oct. 30, Gidgetta worked 47.8 seconds for a half-mile, which was the 13th best of 90 workouts at the distance on the day. Then, in her most recent workout on Nov. 8, the filly worked the same half-mile in a scintillating 47 seconds flat, which was the best workout of the day for the distance. Patrick Husbands is getting on for top trainer Josie Carroll and it appears likely Gidgetta is going to run another “A” race like her last four sprints. If she does, the stretch run between her and Aug Lutes promises to be very exciting.

Our Secret Agent has to be considered a contender to win as well. Her consistent career record of 3-6-3 in 12 career sprint races tells us she shows up with a competitive effort every time. As part of that record, Our Secret Agent finished third in the 2020 Bessarabian as well as second in the 2020 Duchess Stakes (with a career-best 100 figure). Our Secret Agent also just won the Hendrie Stakes at the slightly shorter distance of 6 ½ furlongs last month. The addition of blinkers for that race appears to have made a big difference, as did the jockey change to Kazushi Kimura, who had not ridden the filly since July of 2020 when he won an allowance race at Woodbine aboard her. Her last two sprint efforts have yielded 98 and 99 figures, which are not too far from the best efforts of Gidgetta and Aug Lutes. Our Secret Agent may have what it takes to win this race, and even if she doesn’t win she is highly probable to finish second or third as she’s done so many times previously.