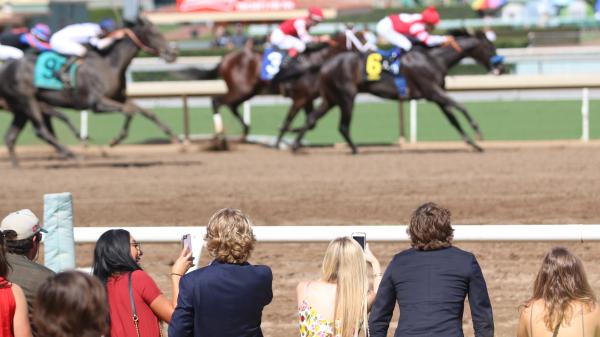 Saturday’s $200,000, Grade 2 Santa Ynez Stakes at Santa Anita Park is a seven-furlong sprint which showcases some pretty good 3-year-old fillies who may end up on the Road to the Longines Kentucky Oaks in a month or two when they stretch out to two turns.

Six fillies are entered, and five of those won their most recent races while the other was defeated by a nose on the wire in her last start. Big Switch, one of three who exit stakes races, is two-for-two, having been last seen in November taking the Golden State Juvenile Fillies Stakes at the distance of the Santa Ynez. Mimajoon won the Golden Gate Debutante Stakes near the end of November while Awake at Midnyte came up a nose short of winning the Grade 3 Jimmy Durante Stakes at one mile on the turf in late November as well. Then there’s a trio of recent maiden winners that have every right to be competitive in this race for newly turned 3-year-olds. Big Shamrock is the one that needs to improve the most following a win in a maiden claiming race. Miss Mattie B stretched out to a mile on grass and won easily on the same day Awake At Midnyte won, while Under the Stars won a dirt sprint quite easily on Dec. 11. All in all, this year’s Santa Ynez Stakes appears to be a great test to see what these gals are made of as they begin the progression into bigger and better stakes races in 2022.

Miss Mattie B ran the fastest of any horse in the Santa Ynez field in her most recent race on Nov. 27, earning a 98 Equibase Speed Figure while drawing off to win by nearly four lengths under Mike Smith, who rides back after getting familiar with her after being the saddle for the first time that day. After starting her career in Indiana this past summer, Miss Mattie B moved to California and to the barn of Robert Hess, Jr. but she did not run well in two races in blinkers, one a sprint on dirt where she finished third, beaten by more than 14 lengths, and the other a sprint on turf where she checked in seventh of 12 after a bit of trouble. Hess removed blinkers for her most recent race, and Miss Mattie B improved markedly to rally from ninth of 12 early, swinging four paths wide on the turn and easily winning. The cut back in distance Saturday is of no concern as it should give her a little extra stamina and kick in the late stages compared to her most recent race. Furthermore, according to a Stats Race Lens research query trainer Hess has a very strong 25% winning percentage and +55% return on investment over the last two years when moving his horses from routes to dirt sprints. With that in mind, Miss Mattie B could run the same or better as in her most recent race and emerge victorious in the Santa Ynez Stakes.

Big Switch is a perfect two-for-two in her career, with the second win coming at the same seven-furlong trip of the Santa Ynez. After earning a lowly 67 Equibase Speed figure winning at six furlongs in August, Big Switch was much more mature when returning to the races on Nov. 5, earning a 91 figure when winning the Golden State Juvenile Fillies Stakes by nearly three lengths after relaxing in fifth of six in the early stages. She’s likely got a bright future ahead of her in the top barn of John Sadler, particularly as one of the other two foals from her dam won seven of 16 races on dirt and was a stakes winner at seven furlongs as well. The 91 figure earned in her second start can be improved upon, and that makes Big Switch a strong contender in this field.

Under the Stars will likely be the betting favorite in this race based on the fact her trainer is Bob Baffert, who has won with nine of 21 starters (43%) since the start of the Santa Anita winter-spring meeting on Dec. 26. Another reason Under the Stars will be bet heavily is she is a half-sister to multiple stakes winner Bodemeister, who won the 2012 Arkansas Derby easily before posting runner-up efforts in the Kentucky Derby and Preakness Stakes that year. Under the Stars won last month in her third career start and earned a 95 Equibase figure in doing so. She certainly may be capable of improving off that effort, but she lacks the class of Big Switch, who just won a stakes race, and she lacks the stamina of Miss Mattie B on the cut back from a winning route to a sprint. Just the same, Under the Stars could be yet prove to be another top 3-year-old filly for Bob Baffert and win this race.

The rest of the field, with their best Equibase Speed Figures, is Awake at Midnyte (89), Big Shamrock (69) and Mimajoon (82).