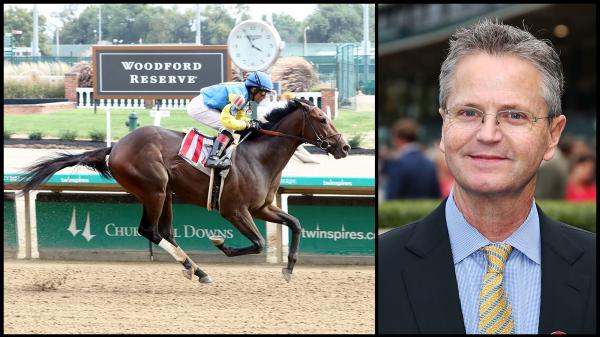 Tom Pedulla is interviewing prominent owners, trainers and jockeys for America’s Best Racing as they travel the road to the 148thKentucky Derby presented by Woodford Reserve on May 7 at Churchill Downs.

Al Stall Jr., best known for his handiwork with older horses, is featured this week. The native of New Orleans will determine whether Trafalger belongs on the Derby trail depending on how the son of sprinter Lord Nelson fares in the $400,000 Risen Star Stakes Presented by Lamarque Ford Saturday at Fair Grounds. The Risen Star will award Derby qualifying points to the top four finishers on a 50-20-l0-5 basis.

Stall, 60, grew up in a racing family. His grandfather and father bred and owned Thoroughbreds. Al Stall Sr. is a member of the Fair Grounds Hall of Fame and served for 28 years as chairman of the Louisiana Racing Commission.

Stall hopes to have his first Derby starter in Trafalgar, owned by Andrea Pollack’s Columbine Stable. Trafalgar and jockey Colby Hernandez will break from post 3 in a field of l0. Post time for the Risen Star is scheduled for 6:58 p.m. ET.

Stall participated in a question-and-answer session conducted on behalf of America’s Best Racing:

PEDULLA: I see Trafalgar sold for $3l0,000 as a 2-year-old in training at the Ocala Breeders’ Sales Company Spring Sale. Were you involved in the purchase?

STALL: Yes. I bought him with my friend, Keith Dickey, who helps me in Ocala. We were looking for a colt, Kentucky-bred, maybe a colt with some distance capabilities. We ended up leaving with a horse that’s by a sire that’s a sprinter, but his sire had brilliance on the racetrack. The reason I like him is Lord Nelson is by Pulpit and Pulpit is by A.P. Indy. This horse really, really had a whole bunch of Pulpit and A.P. Indy in him to look just like the sire line. We were really happy with the sale walking out of it and we’re really happy now, obviously.

PEDULLA: Since you acquired him as a 2-year-old in training, did you give him some down time after that?

STALL: I like buying horses from Nick de Meric just because I know him very well. He got some time whether he needed it or not. That’s why he didn’t make his first start until Labor Day weekend in Saratoga (finishing second to Classic Causeway at seven furlongs). The good thing about this horse is he continued to grow and mature all summer long. He just continued to come our way. He looks really good right now.

PEDULLA: I see that he ran well in his first start and won his second start (at one mile at Churchill Downs).

STALL: We knew he wasn’t showing tremendous gate speed. But once he got himself organized, he was showing us some class.

PEDULLA: What did you think of his fourth-place finish in the Lecomte Stakes in his 3-year-old debut at Fair Grounds?

STALL: We knew the Lecomte was going to be a tough race on him for a lot of reasons, obviously the competition but just the big field size and a lot of pressure throughout the whole race. I thought he ran a pretty good race. The last little part was just even. I’m hoping that was just a little seasoning. That race definitely put him on his toes. People these days aren’t happy running back in 28 days, but I’m very happy with the 28 days for this colt because it seems like he’s awake and will just continue to move forward. He’s getting a lot out of his races.

PEDULLA: Does he have a pronounced running style?

STALL: We’re not going to rush him so much in this race. We kind of thought we needed to ride him away from the gate a bit in his last two starts to get him into the race. Maybe now that he’s had four races, we might just let him run his own race. We’re running with blinkers on in this race for the first time because he does look around a little bit. Maybe that will keep him up in the race on his own, which would be wonderful. His two breezes since his last race have been with blinkers. We’re very happy with how he worked.

PEDULLA: You think the blinkers will keep him from looking around?

STALL: He’s always been that way. I kind of like that because it tells you there might be some more in the tank down the road. We just kind of let him do things on his own for a while. Now that things are getting a little more serious, we decided let’s add the blinkers and see what that does for him, if anything.

PEDULLA: Is this somewhat of a defining race for him?

STALL: If he was to get beaten by l0 lengths or something like that, obviously we’d have to get off the Derby trail and go to Plan B, whatever Plan B might be. There is a little bit of that in this race, yes.

PEDULLA: What are your thoughts about his ability to get the Derby’s mile-and-a-quarter distance?

STALL: If you ignore the sire – and you can’t do that – when you look at him he looks like a two-turn horse that can go as far as they write the races. If he doesn’t finish up like we want him to do, maybe he’ll need to be shortened up. But we’re very comfortable running him in this particular spot. There’s been no extra push to get him there. Everything has just fallen right into place.

PEDULLA: What would it mean if Trafalgar could give you your first Derby starter?

STALL: That would mean we’re running a horse with a chance. I’ve had horses that have nibbled around it and could have run and been longshots. We just didn’t do it. Obviously, it means a lot to everybody who has grown up in this game. If we make it there, it would be this horse taking us, not us forcing the issue.