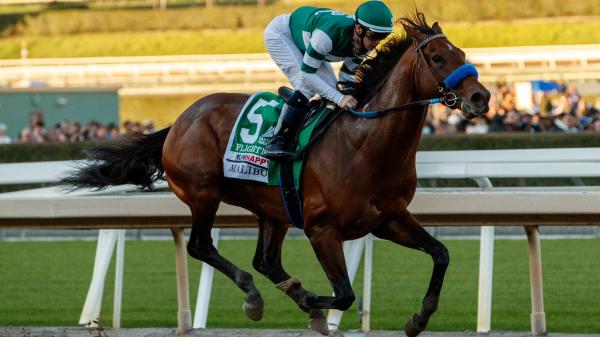 West Point Thoroughbreds’ Terry Finley refers to the colt that has dominated his first three starts by a combined 37 ½ lengths “a gift not just to the partners but the entire industry.”

Fans will be able to judge for themselves when Flightline is tested as never before in the Hill ‘n’ Dale Metropolitan Handicap at Belmont Park on Saturday as part of a compelling Belmont Stakes Presented by NYRA Bets undercard.

The Met Mile, with its rich tradition as a stallion-making race, has the potential to steal some thunder from the main event. Flightline will have serious company for his season debut in Speaker’s Corner, unbeaten in three starts at a one-turn mile, and Aloha West, determined winner of the Qatar Racing Breeders’ Cup Sprint last November. The Met Mile is a “Win and You’re In” qualifying race for the Big Ass Fans Breeders’ Cup Dirt Mile this November at Keeneland Race Course as part of the Breeders’ Cup Challenge Series.

Trainer John Sadler said of Flightline’s first venture outside of California, “It’s very important. It’s a chance for him to showcase himself on the East Coast. I think the industry likes to see him run over there, so it’s important.”

Flightline is a son of Tapit, a proven producer of classic runners, by the Indian Charlie mare Feathered. Those bloodlines – and his confidence in Ingordo – helped to convince Finley that the racing prospect was worth stretching to seven figures.

“There aren’t many horses that have pedigrees that have absolutely zero question marks,” Finley said. “Flightline is one of them.”

He sees the lightly-raced 4-year-old as the total package. “He’s got speed, the size, the pedigree, the personality and the intellect. He’s a very, very smart horse,” he said.

Flightline still must demonstrate that he can stay sound. Fans waited and waited some more for his highly-anticipated first start. “He got backed up in his debut by a paddock accident,” Finley said. “He had a deep and extensive wound on his hip that required a lot of time to heal.”

When the youngster finally debuted on April 24 of his 3-year-old season, he showed he was worth the wait. He rolled gate-to-wire to demolish his competition by 13 ¼ lengths and was ridden out by Flavien Prat.

A foot abscess kept the sophomore on the sidelines until Sept. 5, when a six-furlong allowance optional claiming race at Del Mar was used to provide him with a valuable education. Prat kept him behind front-running Notre Dame. When he signaled Flightline to go, the colt spurted free by 12 ¾ lengths, setting the stage for an overwhelming performance in the Dec. 26 Runhappy Malibu Stakes. He overcame a poor start to rule the seven-furlong Grade 1 contest by 11 ½ lengths at Santa Anita Park. He earned a 118 Beyer Speed Figure, the highest such mark for any horse last year.

Flightline then missed an intended start in the March 5 San Carlos Stakes Presented by FanDuel at Santa Anita with a strained hock.

When asked about the various setbacks they have encountered, Sadler replied, “No doubt we have. I try not to focus on that. I try to do my job to the best of my abilities, which is to make wise decisions and take care of the little problems and look forward.”

Finley said of Sadler’s oh-so-gentle management of Flightline, “I think it’s shown and we’ll continue to see right decision after right decision that John Sadler has made with this horse.”

Sadler has done everything possible to have the horse primed for the Met Mile acid test, putting him through nine workouts at his Santa Anita home base. That series of works finished with a flourish, when Flightline all but flew four furlongs in 46.80 seconds on Sunday, swiftest of 79 workers at the distance.

“He’s 100 percent ready,” the trainer said. “The question marks are ‘How does he ship? How does he adapt to new surroundings relatively quickly?’ “

In addition, Flightline will be stepping up to a mile for the first time as he breaks from the rail with regular rider Prat aboard. “We don’t really wonder how far he can go,” Finley said. “When you look at his works, he really starts to get serious after the wire in just about every one of his works. You can barely pull him up.”

His primary rivals would seem to have an advantage in their preparation for the Met Mile, which carries an automatic berth in the Breeders’ Cup Dirt Mile on Nov. 5 at Keeneland.

Belmont Park-based Speaker’s Corner, also 4, has a tremendous amount of seasoning with nine career starts for Hall of Fame trainer Bill Mott. That includes three wins in as many starts this year, with the most recent of those an emphatic score in the April 9 Carter Handicap.

Five-year-old Aloha West finished third in the May 7 Churchill Downs Stakes Presented by Ford in his lone start since he nosed out Dr. Schivel in the Sprint.

According to Finley, Flightline already is attracting tremendous interest from the breeding industry. “The offers have been closer to nine figures than to eight figures,” he said.

Fans and breeders will be watching closely to see not only how Flightline performs in the Met Mile but, perhaps just as importantly, how he comes out of what looms as the hardest race of his career.