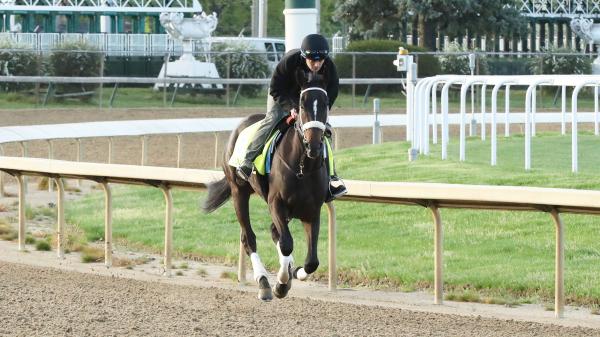 Ricky Courville, trainer of one-eyed sentimental favorite Un Ojo, is featured this week. Courville, 53, is a former jockey. He is headed to the Derby for the first time since he began training on his own in 2009. The gelded son of the late Laoban qualified when he pulled the biggest surprise of the prep season, overcoming 75.40-1 odds to win the Feb. 26 Rebel Stakes at Oaklawn Park.

Un Ojo’s Spanish name stems from the horse’s loss of his left eye in a paddock accident as a yearling, leaving him with one eye.

Courville oversees a modest barn of approximately 30 horses at The Training Center at Copper Crowne in Opelousas, La. His son, Clay, serves as his assistant and exercise rider. Clay broke Un Ojo and accompanied him to Oaklawn for his shocking Rebel triumph.

Clay was aboard when Un Ojo rattled off five furlongs in a crackling 59.40 seconds last Saturday in his first drill at Churchill Downs. The work ranked second among 70 horses at the distance.

PEDULLA: How is Un Ojo handling the track at Churchill Downs?

COURVILLE: I thought in his work he looked really good over it. Comfortable.

PEDULLA: May I ask you to discuss Clay’s relationship with Un Ojo?

COURVILLE: Since he came back after he won the Rebel, he takes care of him. He don’t let nobody groom him or nothing. He does everything himself with that horse. He hovers over him like a mama hen.

PEDULLA: When Un Ojo came to you, was he timid due to the loss of the eye?

COURVILLE: He was. He would just hesitate a lot.

PEDULLA: Would he get nervous when someone was on his blind side?

COURVILLE: No, not really. He was never nervous where he bucked up or anything. Every now and then, something might surprise him. But usually you can walk up to him and he won’t shy or anything.

PEDULLA: On the track, did he cock his head or react in some way to the loss of his left eye?

COURVILLE: He was more looking down at the track. He would jump shadows. He never cocked his head sideways. Once we put the shadow roll on him, he started going a lot better.

PEDULLA: When did you start to think you might have a very good horse?

COURVILLE: The first few times we worked him, he worked really good. He was just so big, we backed off him a little bit. When he won at Delta (Downs) was when he really showed he was going to be a nice horse (he won his second career start, going 6 1/2 furlongs, by 4 1/4 lengths).

PEDULLA: When he won the Rebel at 75-1, were you as shocked as everyone else or did you think he had a shot?

COURVILLE: We thought he had a shot. Clay had called me the day before and said he had trained so good that morning. To say shocked, no. I didn’t get to watch the race. We had horses at three tracks that day, so I was driving back from Delta.

PEDULLA: What does Clay mean to your operation?

COURVILLE: He’s my right-hand man. He’s pretty knowledgeable and an independent boy. I can send him out of town and stuff like that.

COURVILLE: Barn-wise, yeah. He’s been in the barn since he could walk.

PEDULLA: Does the eighth-place finish in the Arkansas Derby in his last start worry you or do you feel you have a handle on what went wrong?

COURVILLE: He just had a rough trip. He kind of got crowded down on the rail. He just got too close to where he hit it.

PEDULLA: I know he received two stitches to close a wound below his left shoulder. Is that at all a factor?

COURVILLE: Oh, no. It’s healed up. The hair hasn’t grown back yet, but he’s fine.

PEDULLA: As the years went by, did you give up on reaching the Derby or was it on your mind?

COURVILLE: I mean, it’s on everybody’s mind. We break babies every year. I’m not that much of a claiming trainer. I like breaking babies because you never know what you’re going to get. You get duds and you get champions. Maybe you will come up with a stakes horse out of the Louisiana-bred crop.

PEDULLA: What does it mean to be going to the Derby?

COURVILLE: Oh, it means everything. It hasn’t sunk in. I just stay busy all the time. I have friends tell me when you are in the paddock and they play “My Old Kentucky Home” you’re going to want to cry. We’ll see. I’m not really an emotional person. I just kind of take things in stride.

PEDULLA: Un Ojo will probably go off as a pretty big longshot in the Derby? Do you give him a chance?

COURVILLE: I think so. Everybody’s got a chance when they’re standing in the starting gate.