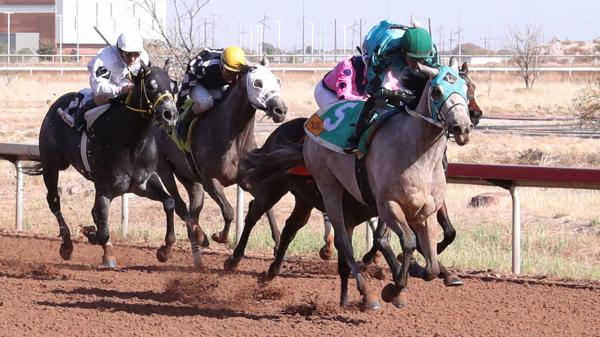 Todd Fincher, who trains $870,000 yearling purchase Bye Bye Bobby for Lori Owens’ B-4 Farms, is featured this week. The New Mexico-based trainer is hoping the gray or roan son of Quality Road, winner of one of four career starts with a pair of runner-up efforts, can provide him with his first Kentucky Derby starter by winning the $500,000 Sunland Park Derby on Sunday at Sunland Park. Fincher, 50, started his operation in l998.

The 1 1/8-mile, Grade 3 Sunland Derby is being run for the first time since 2019 due to the pandemic. It offers 85 Kentucky Derby qualifying points. Fifty of those will be awarded to the Sunland Derby winner, ensuring that horse a place in the starting gate on the first Saturday in May. Fincher’s Runaway Ghost won the Sunland Derby in 2018 to qualify for the run for the roses, but the talented 3-year-old was forced to miss the nation’s premier race with a shin injury.

Fincher, who has almost 100 horses in his care, participated in a question-and-answer session conducted on behalf of America’s Best Racing:

PEDULLA: One of the most striking aspects of Bye Bye Bobby is his price tag. Were you involved in selecting him for B-4 Farms?

FINCHER: We had a bloodstock agent [Pete Bradley] and I think they come with a list of 12 [at the 2020 Keeneland September yearling sale]. I liked two of them. The first one went for $760,000 and [Bob] Baffert people bought it. This was the last one on our list so we went a little higher than we wanted to. We ended up buying it and Baffert was the underbidder on that one. That’s how he got his name, Bye Bye Bobby. The year before, about everything we bid on, Baffert bought.

PEDULLA: Is this the most expensive horse you ever trained?

FINCHER: This is, by far, the most expensive horse.

PEDULLA: What drew you to him?

FINCHER: He is a good-boned, well-balanced horse. He was the best of the 12 they picked out.

PEDULLA: When a client spends that kind of money, do you put extra pressure on yourself?

FINCHER: Not really. If anybody is going to put pressure, it’s going to be the owner and that could be for a $50,000 or $20,000 horse. All I can do is the best I can. I can’t make a donkey run like a racehorse. I’ve been in it long enough to know I do the best I can and see what happens. I don’t really feel the pressure any more. I’ve seen a lot of high-dollar horses that turned out not to be very fast.

PEDULLA: I see Bye Bye Bobby debuted by winning the Zia Park Juvenile Stakes on Nov. 23. Why did you decide to immediately run him in a stakes race?

FINCHER: We put him in the stakes race for insurance because he was ready to run. I wanted to run him in a maiden race a few days later, but that race didn’t go. So, we just ran him in the stake.

PEDULLA: He finished seventh in the Remington Springboard Mile at Remington Park on Dec. 17. That stands out as his only poor performance. What happened?

FINCHER: I had to run him back real quick and take him to a new track. The first race really woke him up. The second race, first time under the lights, and I really never got him prepared to run a longer distance. We were hoping he would sit back and make one run. He just took off with the rider. We had plenty of time after that to kind of re-train his mind to relax.

PEDULLA: I see you are getting better results, coming in second in the Riley Allison Derby (Jan. 30) and the Mine That Bird Derby (Feb. 27), both at Sunland.

FINCHER: The horse has been immature mentally and physically. He just keeps getting better and better. He’s made a mistake in every race he’s run in. Hopefully, we will get those corrected and he will continue to get better and better. If he quits making those mistakes and learns to listen to the jockey and relax, we can be looking for his best race this time.

PEDULLA: When Runaway Ghost was forced to miss the Derby, how did you handle that kind of disappointment?

FINCHER: Well, in the horse business there are lots of disappointments. They will break your heart. You have high hopes for one and something will happen too many times. You just have to know it’s a reality before you get yourself too high.

PEDULLA: Even knowing that, did that experience really hurt?

FINCHER: Well, it would have been my first one. It’s an experience I was really looking forward to. Obviously, the horse’s well-being is number one, so you just have to be prepared for that.

PEDULLA: Bye Bye Bobby is an April 1 foal. Does that work against you to some degree?

FINCHER: When they are 2 and 3 years old, the older you are, the better. But he’s coming into himself pretty good. He’s starting to mature. He’s come a long way in the last couple of months. Hopefully, he’ll keep progressing.

PEDULLA: When Mine That Bird came out of New Mexico to win the 2009 Kentucky Derby at 50-1, did that inspire you?

FINCHER: Sunland Park has a great setup for the Kentucky Oaks and the Kentucky Derby. It’s a great incentive for people to get involved because you are not running day in and day out against the toughest competition around. You get to build a horse’s confidence and teach them without using up too much horse. It’s a big-time confidence booster for horses. I think there are a lot of advantages to being at Sunland for these prep races.

FINCHER: The farther, the better. A mile and an eighth, a mile and three-sixteenths, a mile and a quarter, it should only get better for him the farther we go.

PEDULLA: You must win Sunday to ensure a place in the Kentucky Derby. How do you feel about it?

FINCHER: I think he has a realistic chance of winning the race. Obviously, there are some good horses in there, good trainers and jockeys. It’s up to him. If he’s smart enough to run a good race and not make any mistakes, I think he’ll be very tough to beat.

PEDULLA: If he doesn’t qualify for the Derby, might we see him in the Preakness or Belmont Stakes?

FINCHER: It’s possible, yeah. It just depends on how he runs and how he looks coming out of the race. Absolutely.

PEDULLA: If he does qualify for the Derby, can you put into words what it would mean to finally have a horse in the race?

FINCHER: We don’t get those kinds of horses in this part of the country. It’s not like I have 10 or 12 every year. I’ve got one. I’m pretty fortunate to be in this position. Hopefully, we’ll take advantage of it.