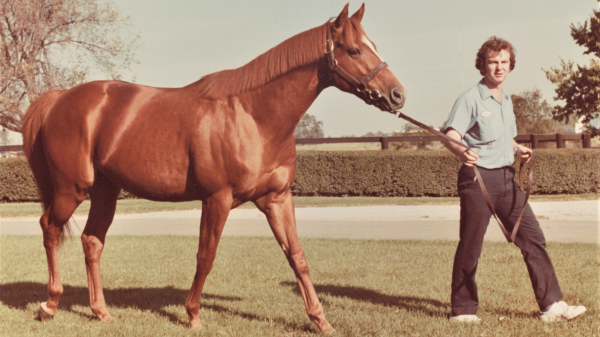 With a superstar young jockey, dueling rivals, and electrifying finishes, the 1978 Triple Crown stands out amongst the other 12 on the strength of the sheer thrills and chills that Affirmed and Alydar brought each time they met on the racetrack. Sham did his best to give Secretariat a run for his money but was never quite able to take the measure of Big Red. Alydar confronted Affirmed 10 times over two seasons and pushed his rival each time, their most famous battle culminating in Affirmed taking the 1978 Belmont Stakes by a nose.

Before the Harbor View Farm salmon pink and black became a part of racing history, even before Affirmed was foaled, came a turning point for the 11th Triple Crown winner. That immortal victory came because one man decided not to give up on a dream.

Louis Wolfson had been a fighter his whole life. He had boxed under the ring name Kid Wolf as a teenager and played football at the University of Georgia before dropping out to help his father’s struggling business. Though the Great Depression was in full swing, Wolfson borrowed money to start a pipe and industrial supply company, finding ways to make money in that most difficult time. The fortune he built through that company allowed Wolfson to act aggressively and buy multiple businesses, creating one of the earliest conglomerates. It also gave him the chance to race and breed horses, including the dominant sire Raise a Native. Wolfsons’ wheelings and dealings along the way landed him in federal prison for violating securities laws.

To pay his legal bills, Wolfson had sold off his breeding and racing stock, more than three hundred horses in all. The only pieces he held on to were shares in Raise a Native and his son Exclusive Native, both standing at Spendthrift Farm in Kentucky. After serving nine months in prison, the newly widowed businessman was not eager to jump back into racing, but his friendship with trainer Hirsch Jacobs and his family would keep him in the business.

After the legendary trainer’s death in early 1970, the horses Jacobs owned in partnership with Isidor Bieber were scheduled to be sold, but Patrice Jacobs hoped to keep two mares registered to her mother, Ethel. Wolfson offered to buy Bieber’s share of both mares, allowing the family to keep both Affectionately and Square Deal. He bonded with Patrice over their shared love of racing and breeding and renewed his determination to build a winning stable as he married Patrice in late 1972.

As part of his effort to rebuild, Wolfson bought the mare Won’t Tell You in foal to Raise a Native for $18,000 at Keeneland in 1972. As a racehorse, Won’t Tell You had only five wins in 23 starts, those coming in claiming races, but her sire, Crafty Admiral, had won the Brooklyn and the Merchants and Citizen Handicaps on his way to being named 1952’s male handicap champion. It was a pedigree that promised quality and Wolfson was ready to take the plunge. After losing it all to his legal troubles, he was back in the game again.

Won’t Tell You was not the only mare that the newly married couple would buy as they rebuilt Wolfson’s Harbor View Farm stable, but she would be the most significant. Right away, though, her value was not obvious to the Wolfsons. Her Raise a Native foal, later named Century Gold, was a disappointment on the racetrack. Next, they bred her to Native Heritage, another son of Raise a Native, and got Little Miracle, another miss. In 1974, Won’t Tell You visited Exclusive Native and foaled a golden chestnut colt the couple named Affirmed.

Patrice quickly bonded with Won’t Tell You’s tall colt, who was as gentle and inquisitive as he was sleek and balanced. Though the mare’s previous foals had not impressed the Wolfsons, this one stood out. He was professional from the get-go, taking to training with an ease beyond his months on the ground. Affirmed regularly bested all of the other Harbor View yearlings, though doing only enough to win by a head or a nose.

Though Patrice had bonded with Affirmed, the Wolfsons had already made up their mind that they would not keep Won’t Tell You. Disappointed by her previous foals and not sure what this yearling would be, they sold her at auction for $5,500. The following year, Affirmed went to Florida and the barn of Willie Barrera, brother of the Wolfsons’ trainer Laz Barrera, and quickly showed that he was head and shoulders above the rest.

At the same time, another star was rising, a colt that harkened back to the glory days of Calumet Farm’s famed red and blue silks, Alydar. This son of Raise a Native, Affirmed’s grandsire, soon would become forever entwined with his rival in the history of horse racing.

In his 2-year-old season, Affirmed won seven of nine starts, finishing second in the other two. He won at Saratoga and Hollywood Park, showing a versatility that would be necessary for a classic try the following season. He bested Alydar in four of their six meetings that year, including wins in the Futurity Stakes at Belmont Park and the Laurel Futurity, both by the slimmest of margins.

The two would not meet again until the Kentucky Derby the next May, opening the door for an extraordinary five-week run that lives on in the sport’s memory.

One for the History Books

Affirmed raced four times before the Kentucky Derby, all on the West Coast, while Alydar did the same in the East, both colts going 4-for-4 before meeting in Louisville. Affirmed came out on top by a length and a half in the Derby and then bested Alydar again at Pimlico, this time by a head. Under jockey Steve Cauthen, Affirmed battled Alydar to the wire at Belmont Park, fighting back each time his rival eked out any sort of advantage. He became the 11th Triple Crown winner by that scant margin and stayed the last of the immortals for 37 years.

In the winner’s circle that June day at Belmont Park, Louis and Patrice Wolfson celebrated Harbor View’s entry into that most elite club in racing alongside trainer Laz Barrera and Steve Cauthen. Wolfson’s decision to get back into racing and the purchase of Won’t Tell You brought them there. His determination to rebuild, that same fight that he showed as a young man, was the turning point that made Affirmed’s run through the Triple Crown possible. Thanks to his wife, Patrice, and that share in Exclusive Native, Wolfson was able to overcome his legal troubles to reclaim a position at the top of the sport he loved, bringing us the Triple Crown’s most exciting rivalry in its storied history.