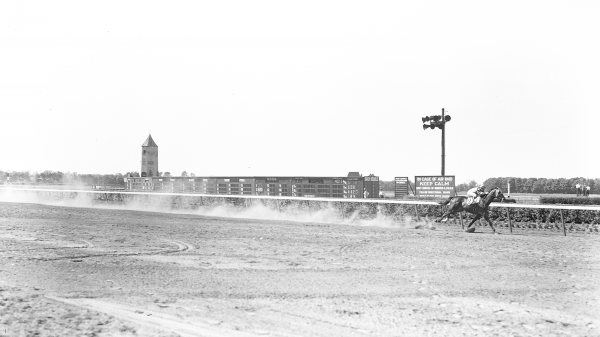 By 1943, the United States was more than a year into World War II, with Allied forces fighting in both Europe and the Pacific. For many, the racetrack served as a distraction, a place to get away from the heaviness of reality and find personalities to root for in challenging times. When that year’s Triple Crown season went on in the midst of wartime rationing, it gave fans a dynamic duo to cheer on: Count Fleet and Johnny Longden, a winning combination.

But their adventures on the racetrack almost did not happen. The stubborn and boisterous colt tested his owners’ patience, leading John and Fannie Hertz to try selling Count Fleet before they had a chance to realize his bottomless potential.

The turning point for this Triple Crown winner came when a conversation between owner and rider led to a fateful decision that allowed Count Fleet to become a champion on the racetrack and in the breeding shed.

The story of Count Fleet truly starts with a boy running away from home. In 1890, at age 11, John D. Hertz left his family to make his way in America alone. Born in what is now Slovakia, Hertz had come to this country as Sandor Herz, the son of Jakob and Katie, the family later changing his name after they had settled in Chicago. On his own with a fifth-grade education, Hertz worked as a newspaper copyboy and then as a delivery wagon driver. He even tried his hand at boxing, but then found more success as a promoter rather than a fighter.

When he met his future wife Frances Kesner, better known as Fanny, her parents were none too thrilled with Hertz’s choice of living. The young man gave up his pugilistic days to settle down with Fannie, turning to selling cars instead.

While working in sales, Hertz had the idea to take used cars that had been traded in and create a cab service in Chicago. This grew into the Yellow Cab Company and then other business ventures, including Hertz Rent-A-Car, which helped make John and Fanny Hertz rich enough to indulge another love: horse racing. In 1927, the couple purchased the 2-year-old Reigh Count from his breeder, Willis Sharpe Kilmer, best known as the owner of the immortal Exterminator, for a purported $10,000. The Hertzes had seen the colt try to savage a competitor in a race at Saratoga. The former pugilist in John Hertz admired the colt’s pluck and decided to add him to their stable. Reigh Count would repay their faith with wins in several of the sport’s biggest races.

At age 3 in 1928, Reigh Count would win the Kentucky Derby and then add the Saratoga Cup, the Jockey Club Gold Cup, and the Lawrence Realization to his tally that year. The next year, the Hertzes sent their Derby winner to England, where won the Coronation Cup and then finished second in the Ascot Gold Cup. His career was enough to make him a Hall of Famer, but this champion did not stop there.

Reigh Count, whose sire and dam never won a race, had more than made up for that with his winning career and then did himself one better at stud.

The 1928 Kentucky Derby winner started his stud career at the Hertzes’ Leona Heights Stock Farm in Illinois before relocating to Claiborne Farm and then to Stoner Creek Stud in Paris, Ky. In his final season at Claiborne, just before he moved to his owners’ new Kentucky breeding farm, Reigh Count covered a mare named Quickly.

She may not have seemed the ideal match for a horse who had won the Kentucky Derby and then came in second in the Ascot Gold Cup, two world famous races. But Quickly, who had won 32 of her 85 starts in six seasons, was a sprinter who had set one track record and equaled two others. Hertz believed that pairing Reigh Count’s excellence as a long-distance horse with a sprinter like Quickly could produce a foal with the right balance of both.

And he was right. On March 24, 1940, Quickly foaled a brown colt with a splotch of white and a white hind sock, Count Fleet. Headstrong and rambunctious, Count Fleet had plenty of the spunk evident in Reigh Count and showed the speed promised by his dam’s pedigree and on-track performances. However, that obstinate nature prompted the Hertzes to sell him. Initially, his price was $5,000, with no takers. The colt’s behavior and Quickly’s age and racing career scared off potential buyers.

Later, the Hertzes sent the colt to trainer Don Cameron at Belmont Park. He brought in jockey Johnny Longden to breeze Count Fleet to get a feel for this unknown quantity, as the Hertzes were still seeking a buyer. An experienced jockey with more than a decade of riding under his belt, Longden could tell that the 2-year-old possessed ability, including the desire to simply run all day – when the colt’s headstrong nature was not actively trying to kill the man on his back. In a workout at Belmont Park, Longden tried to guide Count Fleet around two horses that were coming toward them, but the colt stubbornly insisted on staying in his lane, somehow managing to squeeze between the two instead. Hertz was afraid that the colt might hurt Longden or someone else. Selling Count Fleet was the best option.

But the $4,500 asking price was still too much for the colt with the dubious reputation. Sure, he could run all day, but the colt’s demeanor scared away other riders. Several inquiries about Count Fleet came in, with the highest price offered at $3,500, well below what Hertz wanted. When Longden caught wind that the Hertzes were still determined to sell, he raced to call the owners with pleas to keep the colt. John Hertz, though, was reluctant. “The colt’s dangerous. Someday, I’m afraid he’ll do you serious injury,” the businessman said to Longden.

“I’m not afraid,” Longden simply said. Hertz acquiesced and Count Fleet remained in the yellow and black silks under Cameron’s care. From his first race at age 2 through his final race at Belmont Park, Longden was the only jockey that ever rode Count Fleet in his 21 starts.

Over two seasons, Count Fleet amassed a record of 16 wins, four seconds, and one third-place finish. After opening his 3-year-old season with wins in an allowance race and the Wood Memorial, Count Fleet came into the Kentucky Derby as the favorite and won easily. The Preakness was much of the same, with Count Fleet winning by eight lengths over a field of just three others. The colt that just the year before had been up for sale for just $4,500 was on the precipice of winning the Triple Crown.

Over a mile and a half at Belmont Park, all Longden had to do was hold on as Count Fleet took the Belmont Stakes in stakes record time by an incredible 25 lengths, a margin bettered by Secretariat’s 31 lengths 30 years later.

A cloud hung over the Belmont Stakes victory, though: the colt had injured a tendon in his right front leg. Really, it was not so much serious as it was stubborn. Despite taking the rest of his 3-year-old season off, an attempted return at 4 saw Count Fleet unable to recapture the form that had been his signature for those 21 races. He was retired to Stoner Creek Stud to stand alongside his sire.

In 1927, Willis Sharpe Kilmer’s impatience led him to sell Reigh Count before the colt had reached his top form, and the Hertzes were the beneficiary of that, getting a colt who became a champion on the racetrack and in the breeding shed. Fifteen years later, the Hertzes nearly did the same thing. If it were not for the intervention of Johnny Longden, they would have missed out on a superstar. His advocacy for the headstrong colt was the turning point that cleared the way for Count Fleet to become the sixth to win the Triple Crown and then go on to become a top sire, his name found in many a champion’s pedigree, including that of fellow Triple Crown winners American Pharoah and Justify.