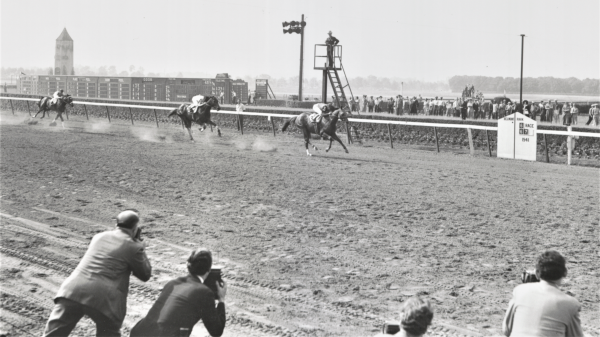 Belair Stud had dominated the sport of horse racing in the 1930s, the distinctive white with red spots a fixture in the winner’s circles of the Triple Crown races in multiple years. By the 1940s, though, the tide was turning toward a different set of silks, the immortal Devil red and blue of Calumet Farm.

With Warren Wright at its helm, the farm went from the trotters to the Thoroughbred, building a breeding and racing stalwart that lasted for decades. For the first decade, though, Calumet struggled to find its footing in the sport, but when a chestnut whirlwind made his debut, all of that changed.

First, however, that whirlwind named Whirlaway needed to be tamed, the turning point in this eccentric colt’s career riding on a bit of ingenuity from his patient trainer.

By 1941, Warren Wright was almost a decade into building Calumet Farm into a Thoroughbred powerhouse. His father, William Wright, had developed the farm as a Standardbred nursery, breeding and developing horses like Peter Manning and Calumet Butler, who won the famed Hambletonian in 1931.

When his father died, Warren inherited the farm and the Standardbreds that William had spent his last years breeding and racing, but the younger Wright was not interested in the trotters. Influenced by the success of his friend John Hertz, Warren Wright wanted to get into the Thoroughbred game in a big way, buying both yearlings and bloodstock to help him realize this vision.

His first two Kentucky Derby starters, Nellie Flag and Bull Lea, had fallen short of Wright’s goal of winning that prized stakes. The master of Calumet would continue to invest more and more in his vision, remodeling and updating the farm’s facilities while also organizing a syndicate of American breeders to bring 1930 Epsom Derby winner Blenheim II to America. By the time he arrived, Blenheim II had produced the mare Mumtaz Begum, dam of excellent sire Nasrullah, and 1936 Epsom Derby winner Mahmoud.

Wright paired his new stallion with Dustwhirl, an unraced mare by Belmont Stakes winner Sweep. She had already produced seven foals by 1937, including multiple stakes winner Feudal Lord. On April 2, 1938, Dushwhirl foaled a chestnut colt with a blaze and three white socks, Whirlaway.

After nearly a decade of building and planning, Calumet was on the precipice of dominating the sport’s biggest days and Whirlaway was just the horse to take them there.

As a young horse, Whirlaway had hinted at the speed he was capable of, regularly beating his fellow foals as they raced around the paddocks. When Ben Jones and his son Jimmy came on board as Calumet’s trainers in September 1939, Dustwhirl’s speedy colt caught the eye of the elder Jones. He elected to train Whirlaway himself full-time while Jimmy would work with the farm’s other young horses.

Whirlaway had obvious talent, winning his first start in June 1940 with ease, but also tended to bear out, heading for the outside fence rather than staying straight toward the inside. The chestnut colt with the distinctive long tail won often that year, starting sixteen times and winning seven, including the Hopeful Stakes and Saratoga Special at Saratoga and the Breeders’ Futurity at Keeneland. His success gave Warren Wright hope that this was his Kentucky Derby winner, but Jones had to figure out how to solve that pesky bearing out problem. He did not do it in every race, but, when he did, going wide off that final turn cost valuable ground that could neuter the colt’s tremendous closing kick. Jones needed a solution and he needed it fast as the big 3-year-old races loomed in 1941.

Unlike Gallant Fox a decade earlier, Whirlaway was not necessarily beholden to the presence or absence of the right rider. Leading up to the Derby, he had seven different riders in 23 races, including legends like Johnny Longden and George Woolf. Yet he seemed to pull the bearing-out move more with less-experienced riders, so Jones knew he needed an experienced jockey for the all-important Triple Crown races. Eddie Arcaro was his choice: Jones had won the 1938 Kentucky Derby with Arcaro. Whirlaway would need the jockey’s light touch to help ease him around that turn and focus on staying straight. After securing Arcaro’s services, Jones executed the next part of his plan: blinkers.

Blinkers, a hood with cups covering some of a horse’s eyes, fit over a horse’s head and the cups narrow the field of vision based on how large they are. Because a horse’s eyes are on either side of their head, they have two different views of the world. The blinkers reduce their vision to what is ahead only, with peripheral vision limited by the size of the cup. Jones took a set of blinkers and cut away the left cup, leaving only the right one. This prevented Whirlaway from seeing to his outside, but would allow him to see to his inside, where the rail would be.

Jones tested his new equipment in a pre-Derby workout with Arcaro in the saddle. He sat on his stable pony a few feet from the rail at the top of the stretch, leaving an opening for Whirlaway to run through on his inside. When Whirlaway and Arcaro approached Jones and the pony, the colt went to the inside, running closer to the rail as the trainer wanted. That single blinker setup worked. But would it be enough to keep Whirlaway focused on his task in the Kentucky Derby?

Indeed, it was. Eighth for the first six furlongs, Whirlaway steadily moved up on the far turn, going around the tiring front-runners. At the top of the stretch, he burst through, taking the lead with that full tail flying behind him. While the other horses were tiring and slowing, the Calumet colt was going faster, putting more and more distance between him and the rest of the field. At the wire, he was eight lengths in front. Arcaro and the blinkers had worked. Warren Wright had his Kentucky Derby winner.

A Lot of Winning

Whirlaway with his single cup blinker and master jockey Arcaro would add the Preakness and Belmont Stakes with ease, giving Calumet its first Triple Crown. He would add the Dwyer and the Travers Stakes that year, for a total of 13 wins in 20 starts in 1941. The fortune and work that Wright had put into this transition from Standardbred to Thoroughbred had paid off and Whirlaway’s success was just the tip of the iceberg. Calumet would return to Churchill Downs again and again in the 1940s, each time with a solid shot at roses. But it all started with that turning point in Whirlaway’s Triple Crown preparations, that signature single-cup blinker.

Arcaro would ride the colt several more times in 1941 and 1942, but Whirlaway would win with other jockeys in his subsequent seasons after that Triple Crown run. Always, though, the Triple Crown champion was outfitted with that distinctive hood, a way for Ben Jones to channel that closing kick into a winning move. Without it, Whirlaway might not have been able to thrill fans and rack up 32 wins in 60 races the way he did over his four-year career. From a cough to a cup, the turning points for each of our Triple Crown winners are as distinctive as they are, that something small making possible the biggest moments in our sport.