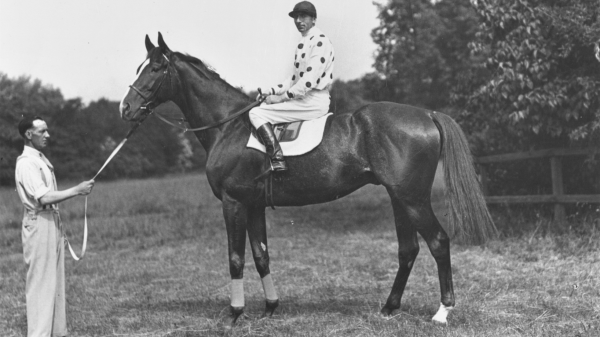 The trajectory of each Triple Crown winner’s career is unique to that horse and his moment. Each shares victories in the three classics, but how they got there and what they did afterward speaks to their individual talents and the people connected to them. Though the list has 13 names, one member of this elite club did something that no other has done: ventured overseas to try a new surface on a worldwide stage: Omaha.

Thanks to a pesky injury and his owner’s dreams of international triumphs, the third Triple Crown winner went on a grand adventure to face a challenge unlike any American race had to offer.

Bred by his owner William Woodward, Omaha was made for the classic wins that helped define his career on the racetrack: his sire was Gallant Fox, the second Triple Crown winner, and his dam, Flambino, had finished third in the 1927 Belmont Stakes. A tall horse with a long stride, Omaha was often slow getting away from the starting gate, but he could deliver a sustained closing kick in the stretch, a style much more suited to long-distance races. He won only once at 2, the shorter distances of juvenile stakes not conducive to his running style. At 3, though, he shined, winning at 1⅛ miles and beyond.

His wins in the Kentucky Derby, the Preakness Stakes, and the Belmont Stakes all came easily, winning by as much as six lengths at Pimlico and 1 ½ lengths in the other two. After winning the Dwyer Stakes and the Arlington Classic, trainer “Sunny Jim” Fitzsimmons shipped Omaha to Saratoga for the late summer meet there with the intention of avenging his sire’s spectacular loss to Jim Dandy in the 1930 Travers Stakes.

But Omaha would never see the starting gate for the “Midsummer Derby.” As Fitzsimmons prepared the third Triple Crown winner for the Travers, it was clear that the colt would not be ready. A shoulder injury from his turn in the Arlington Classic knocked Omaha off the path that his sire had traveled in 1930, sending Omaha to the sidelines as Fitzsimmons tried to rehabilitate his star 3-year-old. The injury was stubborn, though, the accompanying soreness lingering after each workout. Instead, Woodward opted to retire Omaha for the year, sending him to Belair Stud in Maryland to recover.

This injury became a turning point in Omaha’s career, the catalyst for trying something that no other Triple Crown winner before or since has attempted: racing in England.

With Gallant Fox and two other Belair stallions standing at Claiborne Farm, owner William Woodward decided to keep his champion colt in training, with the goal of racing as a 4-year-old. After Omaha showed that he might be ready to resume racing, Woodward decided to send the colt to England to try for the valuable prizes there rather than continue to race him in America. Before he could send him overseas, though, the owner needed to know if Omaha was ready. Assessing that fell to Captain Cecil Boyd-Rochfort.

Woodward had engaged Boyd-Rochfort, trainer for Americans like Marshall Field III and George Widener, to condition the handful of horses he sent to England each year with the goal of winning races like the Epsom Derby and the Ascot Gold Cup. The Englishman made his annual trip to America in December 1935, stopping at Fitzsimmons’s barn at Aqueduct to see Omaha. After watching a workout, Boyd-Rochfort declared the colt fit, opening the door for the third Triple Crown winner to voyage to England. His goal? The 2½-mile Ascot Gold Cup.

After a weeklong voyage on the Aquitania, Omaha arrived in England and immediately started training for his turn at Royal Ascot five months later. He easily transitioned from running counterclockwise on dirt to running clockwise on turf, winning his first two races there. That set up his try at the Ascot Gold Cup, a race won by an American horse only once, though 1928 Kentucky Derby winner Reigh Count had come close, finishing second in 1929. The field included Quashed, the English filly who had already won several races at similar distances that season.

Both Omaha and Quashed were midpack through the first two miles of the Gold Cup, waiting for their chance to make a push for the front. Quashed moved up to second on the final turn, Omaha stalking her in third, pushed out wide by another horse. As the field entered the stretch at Royal Ascot, Quashed took the lead, the American colt driving on her outside. They hooked up a quarter of a mile from the finish, dueling head-to-head, battling for any advantage they could gain over the other. If the filly pulled ahead slightly, Omaha would battle back, the two coming down to the wire together in what seemed like a dead heat. Instead, the filly would win by a head, denying Omaha an Ascot Gold Cup to go along with his Triple Crown.

The One and Only

Omaha would race one more time during his English sojourn, finishing second before retiring for the rest of the 1936 season. Woodward kept the third Triple Crown winner in England for one more year to give Omaha another chance at winning the Gold Cup. A tendon injury the week before the 1937 edition meant the end of his pursuit of Royal Ascot’s biggest prize. Woodward sent Omaha back to the United States to stand stud alongside his sire Gallant Fox and his grandsire Sir Gallahad III at Claiborne Farm.

Omaha remains the lone Triple Crown winner to cross the Atlantic and race in England, the home of the original Triple Crown. Had the Belair colt not gotten injured in the Arlington Classic, he likely would not have made the trip to try for the Ascot Gold Cup, denying us what The Observer called one of the 10 greatest races of all time. That injury might have prevented him from copying his sire’s great 3-year-old season, but it became the turning point that brought us something even better, Omaha’s international adventure.