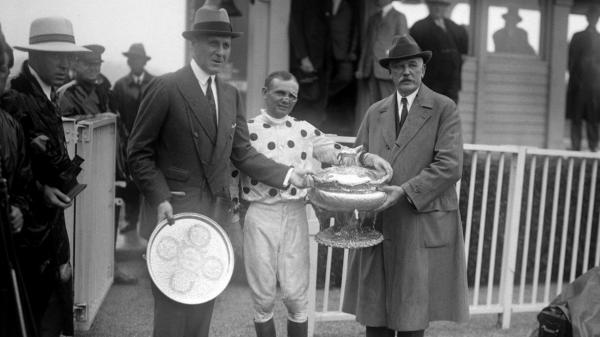 The list of Triple Crown winners has 13 names on it, each with their own unique path to membership in this elite group of Thoroughbred racing legends. Some started out as second fiddle to a stablemate, only to rise to the top with surprising wins in America’s most famous races. Others showed their quality early, wins in the Kentucky Derby, the Preakness Stakes, and the Belmont Stakes demonstrating the depth and breadth of their talent and heart. Each faced a turning point, a moment when a decision or a coincidence sent them down the path toward glory. For Gallant Fox, that turning point came when he met a handy guy named Sande.

After nearly two decades of breeding, William Woodward Sr. had developed his Belair Stud into a reliable source of good racehorses, not just for himself but for those who bought his horses. By 1930, Belair had had a collection of stakes-winning horses, but lacked a star, a dynamic force that would propel the white with red polka dots to the heights that Woodward sought. Enter Gallant Fox, a colt by the French stallion Sir Gallahad III out of Marguerite, the master of Belair’s beloved mare.

Despite an uneven season at age two, William Woodward knew his colt had the speed and stamina to become a champion, but it was clear that the Fox needed one more thing to realize that potential. Belair had the right trainer, the legendary “Sunny Jim” Fitzsimmons, and Gallant Fox had the pedigree for greatness. All he needed was the right pilot.

“Fitz, wouldn’t it be good if we got a regular rider for this horse?” Woodward asked his trainer.

“Yes, it would,” Fitzsimmons said. “Who would you like to get?”

“The fella that can do the best job,” Mr. Fitz replied.

That ‘fella’ was one Earl Sande.

Earl Sande had started his career riding at informal race meetings out west before making his way to the Fair Grounds in New Orleans, making his debut in January 1918. The 20-year-old jockey soon was under contract to Commander John Kenneth Leveson Ross, the Canadian sportsman intent on building a superstar stable. Sande rode Billy Kelly and Sir Barton for Ross, Man o’ War in the 1920 Miller Stakes, and then won two Kentucky Derbys and four Belmont Stakes for Rancocas Stable and other owners in the 1920s.

A series of injuries, the death of his wife, and a permanent suspension for his ride on Bateau in the 1927 Pimlico Futurity prompted Sande to turn to training a stable of his own. Returned to good standing as a jockey, he even rode a few of his horses under a special license but found little of his former success. Undaunted, he sold off his horses to satisfy his debts and decided to return to riding full time in 1930, working horses for former employer Joseph Widener as he looked for mounts. That’s when he got a telegram from William Woodward.

When Gallant Fox made his debut in Woodward’s silks on June 24, 1929, he had Jimmy Burke in the saddle for that five-furlong allowance race. Over the next six starts, the 2-year-old had the services of Burke, Danny McAuliffe, and John Maiben, with varying degrees of success. With only two wins in seven starts, Woodward knew that the Fox was capable of so much more, but he would need someone to help him unlock that talent and it was clear that his previous riders were not the answer.

After his conversation with Fitzsimmons, Woodward sent that telegram to Earl Sande, who was just starting his comeback. Woodward wanted Sande for his ability, proven over a decade’s worth of rides on horses like Man o’ War, Zev, Grey Lag, and more. In his breeder-owner’s estimation, Gallant Fox was the best and he deserved the best rider as he took on the challenges of the long list of 3-year-old stakes planned for him.

Even though Sande had yet to take a seat on the Fox, he agreed to ride the Belair colt in his first two races of the year, which happened to be the Wood Memorial and the Preakness Stakes, a race that Sande had not yet won in his illustrious career. Would Sande find success with Gallant Fox and help Fitzsimmons and Woodward realize the potential they saw in the colt? Or would their experiment prove unsuccessful?

In the Wood Memorial, Sande held Gallant Fox in second behind Crack Brigade, waiting for the stretch to make his move. In a few strides, the Fox passed Crack Brigade as if he was standing still, poetry in motion as he stepped out to a four-length win. The Wood Memorial was an auspicious beginning to the new season, his victory making him the favorite in the Preakness Stakes nearly two weeks later.

The Fox drew the rail post for the Preakness, which concerned Woodward because he knew that his colt tended to start slowly from the barrier. Entering the first turn at Pimlico, Sande found that he and the Fox were boxed in and took the colt to the outside to find racing room. That move lost ground, which he made up when Sande gave him his head. The Fox took off and pulled even with the leader Crack Brigade as they entered the stretch. Sande tapped Gallant Fox with his whip twice, rousing the colt to pass Crack Brigade and take over the lead, overcoming the Fox’s tendency to run in company rather than passing horses. The margin of victory was three-quarters of a length. In two races, Gallant Fox had proven that he was not only a good horse, but he had shown Earl Sande everything he needed to know.

“He is a great horse, Mr. Woodward,” Sande said.

Gallant Fox would go on to run eight more times in 1930, including the Kentucky Derby and the Belmont Stakes, completing the second Triple Crown sweep. His only blemish that year would be the Travers Stakes, where a speed duel with Whichone would get the better of both Sande and the Fox and open the door for Jim Dandy to pull his legendary upset.

Earl Sande’s agreement to ride the Belair colt in 1930 was the turning point that pivoted Gallant Fox from a mixed record at two to a Triple Crown winner at three. He had the pedigree and the trainer; all the Fox needed was the right jockey to steer him to immortality.