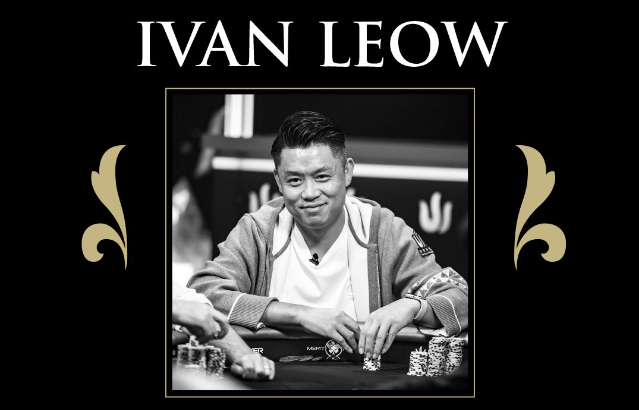 The high-stakes poker community was left reeling after news broke on Saturday that one of their own, Ivan Leow, passed away at just 41 years old from a reported heart attack. Leow was a founding member of the now highly popular Triton Poker series, alongside Paul Phua and Richard Yong.

It is with great sadness we announce that our dear friend, partner, supporter and founding Triton member, Ivan Leow, 41, passed away this morning of natural causes. pic.twitter.com/ZT0tPLfAPr

Leow was a successful Malaysian businessman who started playing the high-roller circuit in 2017 after some smaller live poker results that started in 2015. He amassed over $13 million in live tournament earnings, with his results coming exclusively in high roller and main events played in Asia and Europe.

He won two Triton Series events in back-to-back months in 2018. First, a HK$ 500K short deck event in South Korea that earned him $1,079,367, and then another high roller Event in Russia the next month for another $1,1 million and change. His biggest career cash came in a runner-up result at the $250K Super High Roller Bowl Europe event in Cyprus, for $2,460,000.

The final table of the $50K short deck ante only event was scheduled to play out on Saturday, but was postponed as a result of Leow’s passing. In addition, the two remaining events on the schedule, the $100K main event and the $25K short deck event were both canceled.

Tributes began to pour in from poker Twitter shortly after the shocking news. Yong quote-tweeted the original tweet with a simple crying emoji, while fellow Triton Poker founder Phua had this to say.

This is one of the saddest day of my life. Rip brother. We love ❤️ you and your memories will stay with us forever. https://t.co/Jaquy2Oy9Y

My first interaction with Ivan Leow was in Macau and it was nothing but positive vibes. He was always smiling and welcoming to every single person. He will be greatly missed. Rest in Peace my friend. https://t.co/mNxJ1N4SAI

what a insanely terrible news. You could see he has changed over the last few years, but I would never thought he was severely sick… True legend of the game, such a young guy. What a loss… RIP 😢 pic.twitter.com/BMwAZAiH8I

Ivan was an incredible player to watch, the way he moved at the table, the way he handled his chips, Ivan was like California cool, & a very talented player, always rooted for him, passing at 41 is incredibly sad, RIP sir

Leow was playing poker as recently as two weeks ago when he recorded his final cash in the opening event of this Triton Series in Cyrpus, earning $59K for a 12th-place showing. He was also involved with the marketing for this series in Cyprus, even appearing in a brief ad to invite former Super High Roller Bowl Champion Michael Addamo.