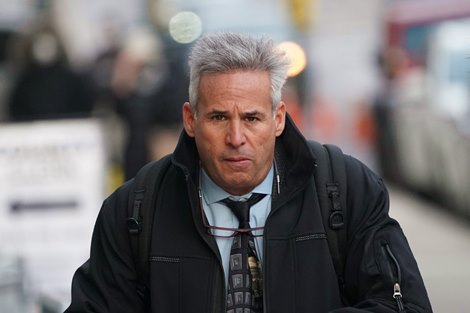 The testimony from Adrienne Hall and Jamen Davidovich highlighted the seventh day of Fishman’s trial on adulteration and misbranding conspiracy charges. Fishman was one of 27 individuals charged in the case and is the first on trial. Those charged include two prominent trainers—Jason Servis, who is awaiting trial, and Jorge Navarro, who pleaded guilty and has been sentenced to five years in prison.

Hall, of Monroe, N.J., trains horses at the Sunshine Meadows harness track in Florida and last raced a Standardbred last month in New Jersey. Davidovich, also an owner, raced primarily in the Mid-Atlantic in 2020-21. He has starts this year in New York and Ohio and says he approaches the sport now more as a hobby.

Both told the jury of eight women and four men how they went about getting in touch with Fishman in 2017 and 2018 with the sole intention of obtaining PEDs that wouldn’t show up in post-race testing.

“His reputation preceded him,” Davidovich, 31, of Pennsylvania said.

Hall testified Fishman gave her a PED called VO2 Max, which she used to dope a horse and win a harness race in March 2019. Prosecutors have elicited testimony that VO2 Max increases horses’ oxygen levels that enable them to run faster and longer but at risk to their safety and well-being.

The jury heard a portion of an FBI wiretap that captured Hall excitedly telling Fishman about the first-place finish.

“I wish you could have seen the race,” Hall says to the veterinarian. “He was so fantastic. He dominated. He was a completely different animal. I was so happy.”

“What is it usually?” Fishman asks.

Hall testified that the PEDs were a gift from Fishman. She said she believed that was the case because Fishman wanted her to connect him to two trainers she knew.

One of those trainers was Todd Pletcher, the Hall of Famer who runs a large stable.

His name was revealed under cross-examination by Fishman attorney Maurice Sercarz.

At the start of her direct testimony Hall had said that before she got her trainer’s license, she worked at two Thoroughbred farms and for Pletcher’s stable in an administrative position, not with horses.

Hall told Sercarz that even though she told Fishman she would contact Pletcher, she never did.

Mortazavi then asked why that was when she questioned the witness again.

“He would never take my advice or opinion,” Hall testified, referring to Pletcher. “I would never approach him about something like that.”

Hall was on the witness stand, testifying against Fishman as part of a non-prosecution agreement with prosecutors. They agreed not to prosecute her for doping horses.

Hall and Davidovich could, however, potentially face sanctions from regulators after their testimony. Servis and Navarro have been suspended from racing, as have other indicted individuals.

Davidovich told the jury Fishman began supplying him with PEDs after a meeting at a sushi bar in Fort Lauderdale, Fla. He said there was a third person at the meeting, a person he described as “my owner.”

Asked by prosecutor Anden Chow how the subject of PEDs came up, Davidovich responded, “We were talking about different things to make the horse run better.”

Davidovich said that as they got to know each other, Fishman complained to him about Navarro. Prosecutors say Fishman was one of Navarro’s suppliers of banned PEDS.

“He said Navarro owed him a lot of money, and he was going to cut him off if he didn’t pay,” the witness testified. “He also said he didn’t want (Navarro) taking down the whole ship because he had a loud mouth.”

Davidovich said Fishman was referring to a video shot at Monmouth Park in which Navarro and one of his owners bragged after winning a race that Navarro was the “Juice Man.”

“He was the first person in the business who took me under his wing and taught me a different way of being involved in horse racing,” he testified.

He added: “I know what I did was wrong, and I wanted to move forward in a different way.”