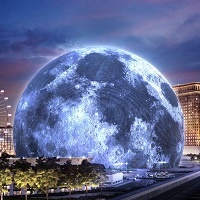 U2 Will Open the MSG Sphere at Venetian

The legendary band U2 is scheduled to perform the very first concert at the MSG Sphere at the Venetian in Las Vegas. And while there is no specific date as of yet, the venue is expected to open sometime this year.

The opening had been originally slated for 2021. However, the delays associated with the pandemic, as well as additional “cost-saving measures” have pushed that date back repeatedly. The construction of the MSG Sphere was first announced in early 2018, and construction began in September of that year.

When completed, the Sphere will be a $1.8 billion arena and the largest spherical structure ever constructed. When configured for concerts, it should be able to accommodate 20,000 standing guests, or over 17,000 seated guests. There will also be an additional 23 VIP suites available.

The inside of the Sphere is essentially a 160,000 square foot, high definition video screen, dubbed as an “immersive display”. Outside, it will light up the Las Vegas skyline with fully programmable LED technology, allowing it to alter its look for specific events.

U2 will actually have a residency at the MSG Sphere  which will extend over several months. The band is the second-highest-grossing-touring band of all time, with well over $2.2 billion earned. The management for the band did not comment on this story.