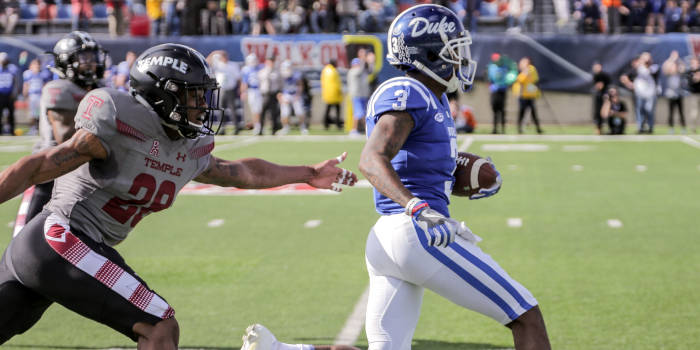 This is going to be the first Duke vs UCF game in history, as well as the first time that either of these colleges is taking part in the Military Bowl.

At the moment of writing, the Duke Blue Devils are seen as odds-on favorites to win the 2022 Military Bowl, however, that wasn’t always the case. When the odds were initially published, the UCF Knights were priced at -147. Let’s see why that happened.

The UCF Knights lost the American Athletic Conference Championship Game to the Tulane Green Wave on December 3, which was the last time they went on the field. It was a blowout 45-28 loss, in which the Knights defense just couldn’t do anything.

Their offense did score 28 points, but they were far from impressive. Their starting quarterback John Rhys Plumlee and third-string Thomas Castellanos were in charge of calling the signals that day but did not impress.

To make things even worse, Plumlee is struggling with an injury at the moment, which is why he might miss the Military Bowl. Backup Mikey Keene entered the transfer portal (even before the Championship Game) and will miss the game as well. This leaves Castellanos as practically their only option at QB.

As if all that wasn’t enough, The UCF Knights have also lost their offensive coordinator Chip Lindsey. Last week, he inked a deal with North Carolina, effective immediately.

Duke Blue Devils are Great in the Offense, Bad in the Defense

The Blue Devils finished the NCAAF season at 8-4 with 5-3 in the Atlantic Coast Conference. Their scoring average was 33.08 which is only slightly lower than what the UCF Knights were averaging before their starting QB got injured.

Speaking of QBs, the signal-caller for the Blue Devils is sophomore Riley Leonard who’s got 2,794 yards and 20 TDs to his name this season. He and his teammates sure have what it takes to run riot on UCF’s defense.

The real question is whether Duke’s defense can finally put on a decent performance. Their defensive average of 22.83 doesn’t seem too bad, but the fact is that they didn’t play against too many great offenses in 2022.

Our prediction of the 2022 Military Bowl is that this is going to be one very interesting game. Neither team is great defensively, which is why we think the outcome of the game will be decided by the team with the better offense.

So, which team is better offensively? Considering that UCF’s starting QB is reportedly struggling with an  injury, we got to go with Duke.

Picks: Duke Blue Devils to win and cover the spread; under 62.5 to hit