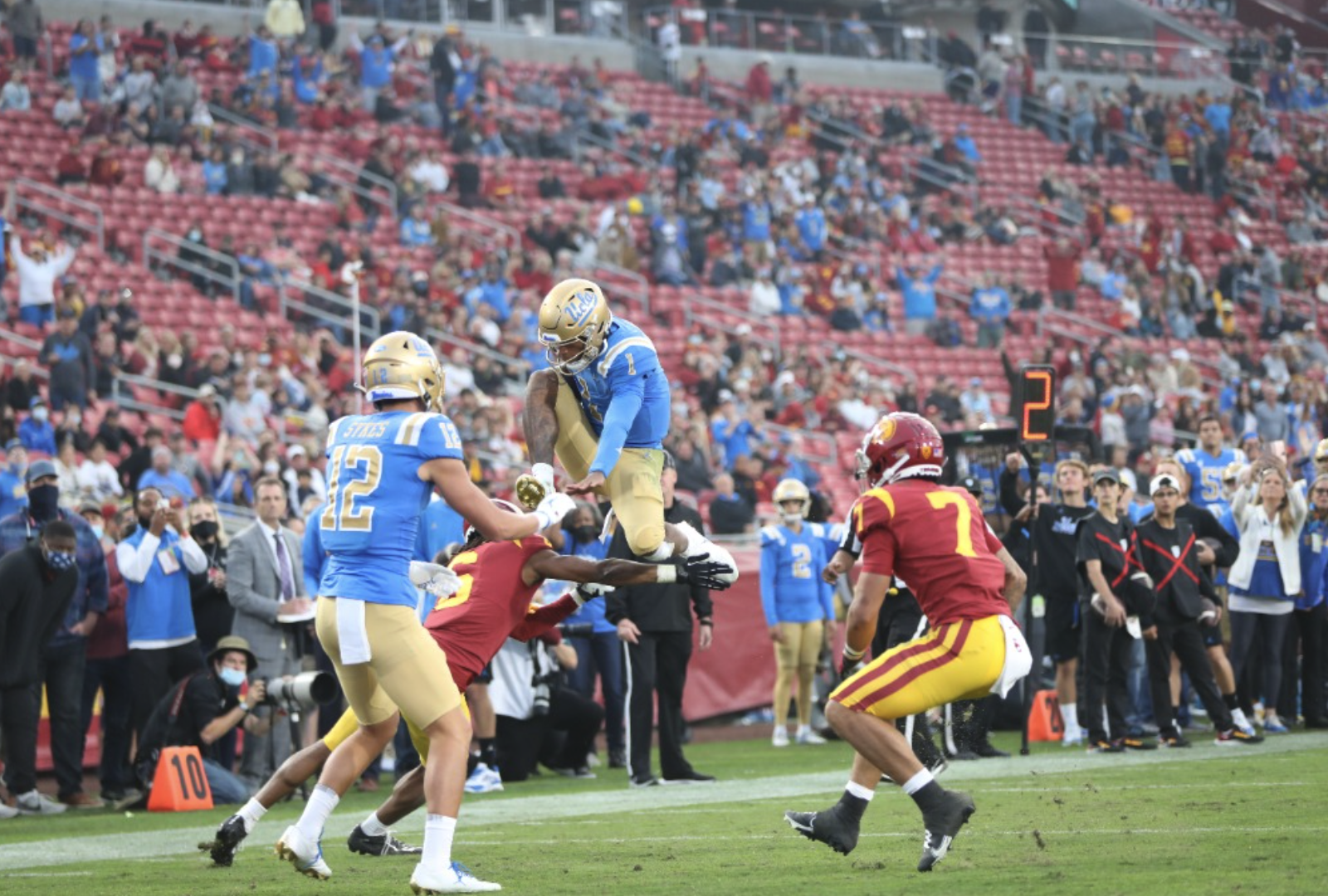 About the only thing that stays the same in college football nowadays is change, and we got more of that on Thursday.

UCLA quarterback Dorian Thompson-Robinson hurdles a USC defender in leading the Bruins to a 62-33 over the rival Trojans on Nov. 20. On Thursday, the two schools were accepted to join the Big Ten Conference starting in the 2024-25 season. (Image: Jesus Ramirez/UCLABruins.com)

News broke early in the day that Southern Cal and UCLA applied to become members of the Big Ten. Then, the conference announced at 8:30 pm ET that the two Los Angeles-based schools and longtime members of the Pac-12 conference had been accepted and would switch affiliations in two years.

As the national leader in academics and athletics for over 126 years, the Big Ten Conference has historically evaluated its membership with the collective goal to forward the academic and athletic mission for student-athletes under the umbrella of higher education,” Commissioner Kevin Warren said in a statement, adding that USC and UCLA fit its criteria.

The Big Ten’s announcement comes just less than a year after the SEC announced Texas and Oklahoma would leave the Big 12 for its conference. The Big 12 responded a couple months later by bringing on Brigham Young, Central Florida, Cincinnati, and Houston to join its league.

Why the Move was Made

Looking at a map of the continental United States would tell you that two California schools joining a conference of Midwestern and Mid-Atlantic universities makes little sense. But as anyone who follows major collegiate athletics over the last couple of decades knows, it’s not about common sense. It’s about dollars and cents.

With two LA schools coming on board, the Big Ten now has a presence in the country’s top four TV markets and five of the top seven. Those markets don’t even cover The™ Ohio State University and the University of Michigan, the league’s two top football programs. The arrival of the UCLA Bruins and USC Trojans will certainly help it command higher valued broadcast deals. With those coming either from television networks, streaming services, or both.

And the odds are pretty strong that this won’t be the last domino to fall in the realignment game for college sports. There have already been reports that other Pac-12 schools now are looking elsewhere, and it’s highly likely the SEC or the Big Ten will continue to invite other schools to join.

Bigger Games to be Better for Bettors

Thursday’s news won’t affect any odds for this season. Ohio State is the -200 favorite to win the Big Ten at FanDuel. USC, with new coach Lincoln Riley, is the +140 favorite in the Pac-12. UCLA is the fourth choice at +1200 to win the Pac-12.

Where college football realignment will impact sports betting is when the moves happen. Come 2024, we may see more big games involving traditional powers. A Michigan-Southern Cal game would often be the headliner for a college football weekend. So, too, would an Alabama-Texas or a Georgia-Oklahoma matchup.

Those games would just draw huge national television audiences, they’d also attract a lot of bettors as well. And while that’s not the intent behind the moves, it definitely will be beneficial to sportsbooks.