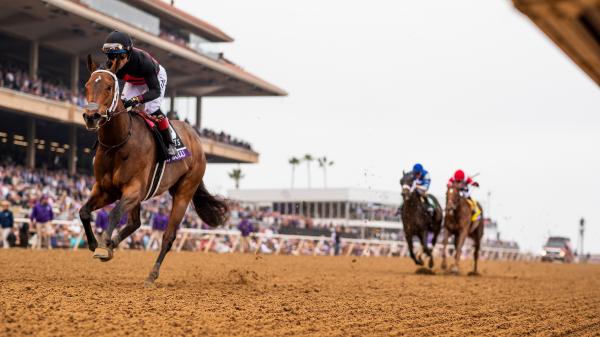 Whether you like betting on favorites or longshots, the $2 million, Grade 1 NetJets Breeders’ Cup Juvenile Fillies is the perfect race to play. As counterintuitive as it might seem, it’s a fact backed up by statistics.

How can this be? It turns out North America’s championship race for 2-year-old fillies is a haven for both short-priced favorites and massive longshot winners. Even a quick look through the history of the Juvenile Fillies reveals the details.

What else can historical stats tell us about the Juvenile Fillies? If you want to have the best chance at picking the winner on Nov. 4 at Keeneland, then read on – we’re sharing seven history-driven tips and trends to aid your handicapping.

Over the last decade, speed has been the key to success in the Breeders’ Cup Juvenile Fillies. Seven of the last 10 winners were racing first, second, or third (within 2 ½ lengths of the lead) after the opening half mile, with five leading all the way.

Furthermore, it’s worth noting that Ria Antonia (who charged from sixth place in 2013) actually won the Juvenile Fillies via the disqualification of She’s a Tiger, who led from start to finish while carving out the fastest Juvenile Fillies fractions of the last 10 years.

No jockey has enjoyed more success in recent editions of the Breeders’ Cup Juvenile Fillies than Joel Rosario. The Eclipse Award-winning rider has won the race in 2018, 2020, and 2021 giving him an overall 3-for-12 record in the Juvenile Fillies.

Hall of Fame jockey Mike Smith is another worth following. Smith’s 3-for-12 record in the Juvenile Fillies includes victories in 2008, 2015, and 2017, and his last four mounts have all finished in the top three.

Getting back to the stat we outlined in the intro, the Breeders’ Cup Juvenile Fillies has historically been kind toward favorites. Indeed, the top betting choice has prevailed in 19 of the 38 editions, an impressive 50% win rate.

It takes a quality filly to win the Breeders’ Cup Juvenile Fillies. Case in point? 14 of the last 15 winners (and 19 of the last 21) had previously contested a Grade 1 race. The two exceptions were Awesome Feather (2010) and Dreaming of Anna (2006), and both entered the Breeders’ Cup undefeated with multiple smaller stakes wins to their credit. When betting the Juvenile Fillies, you don’t want to play an inexperienced filly stepping into stakes company for the first time.

In recent years, the key prep for the Juvenile Fillies has been the Grade 1 Frizette Stakes at Belmont Park (held at Belmont at the Big A in 2022), which has produced six of the last 11 winners. In other words, recent history suggests there’s a 55% chance the Breeders’ Cup Juvenile Fillies winner will exit the Frizette – talk about a powerful angle!

Other productive prep races include the Grade 2 Chandelier Stakes at Santa Anita (a Grade 1 event prior to 2020) and the Grade 1 Darley Alcibiades Stakes at Keeneland. Over the last 10 years, they’ve produced two Juvenile Fillies winners apiece.

Favor runners drawn in outside posts

It can be tricky for lightly-raced horses to work out a comfortable trip while breaking from an inside post position in a large field. Eight of the last 11 winners of the Breeders’ Cup Juvenile Fillies started from post six or wider, and during the same timeframe only two fillies breaking from the rail have finished in the top three. One of the two was budding superstar Beholder, who secured a clear early lead from the rail on her way to a gate-to-wire victory in 2012.

Noting how effective the Frizette has been at producing Breeders’ Cup Juvenile Fillies winners, we have to respect the chances of Chocolate Gelato. The Todd Pletcher-trained filly won the key prep, has some tactical speed (though she rallied from behind in the Frizette), and may start as the favorite.

But if Chocolate Gelato sticks with rallying tactics in the Breeders’ Cup, history suggests a couple of her speedier rivals may hold a tactical advantage. The most obvious is Wonder Wheel, a gate-to-wire winner of the Alcibiades. The accomplished filly boasts a 3-for-4 record, with her lone defeat being a runner-up finish in the Grade 1 Spinaway Stakes at Saratoga.

However, from a historical perspective, You’re My Girl might be the most likely winner of the Juvenile Fillies. A 14 ½-length debut winner at Saratoga, You’re My Girl set the pace in the Frizette before battling on gamely to finish second, beaten only one length by Chocolate Gelato.