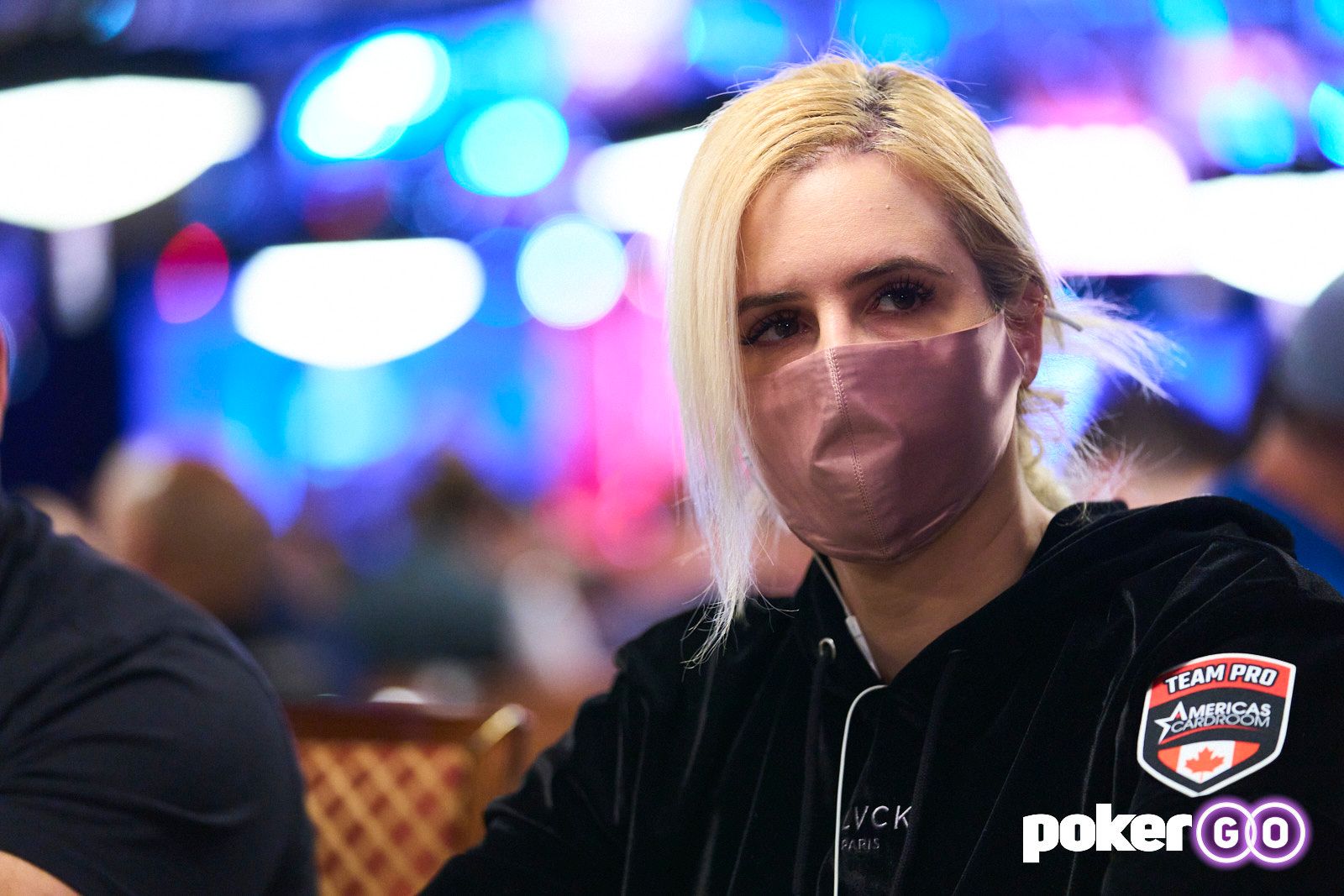 Poker pros Todd Witteles and Vanessa Kade are trading jabs on Twitter following a spate of COVID cases at the WSOP.

Vanessa Kade is hitting out at Todd Witteles following suggestions that she spread COVID-19 at the WSOP. (Mark Gorman/Poker Central)

The pair have exchanged crossed words in the past. However, Witteles’ latest tweets appear to suggest that Kade is the WSOP’s patient zero when it comes to COVID-19. Witteles’ original tweet was posted on Monday night, but is unavailable today.

However, the replies from Kade are still visible, as are subsequent posts from Witteles. He has since tweeted that he “never said or implied” Kade was responsible for spreading COVID-19 at the WSOP. She disagrees.

Kade posted screenshots of Witteles’ now-deleted tweet that show him referring to someone who played Day 1C of the Main Event as previously having COVID. 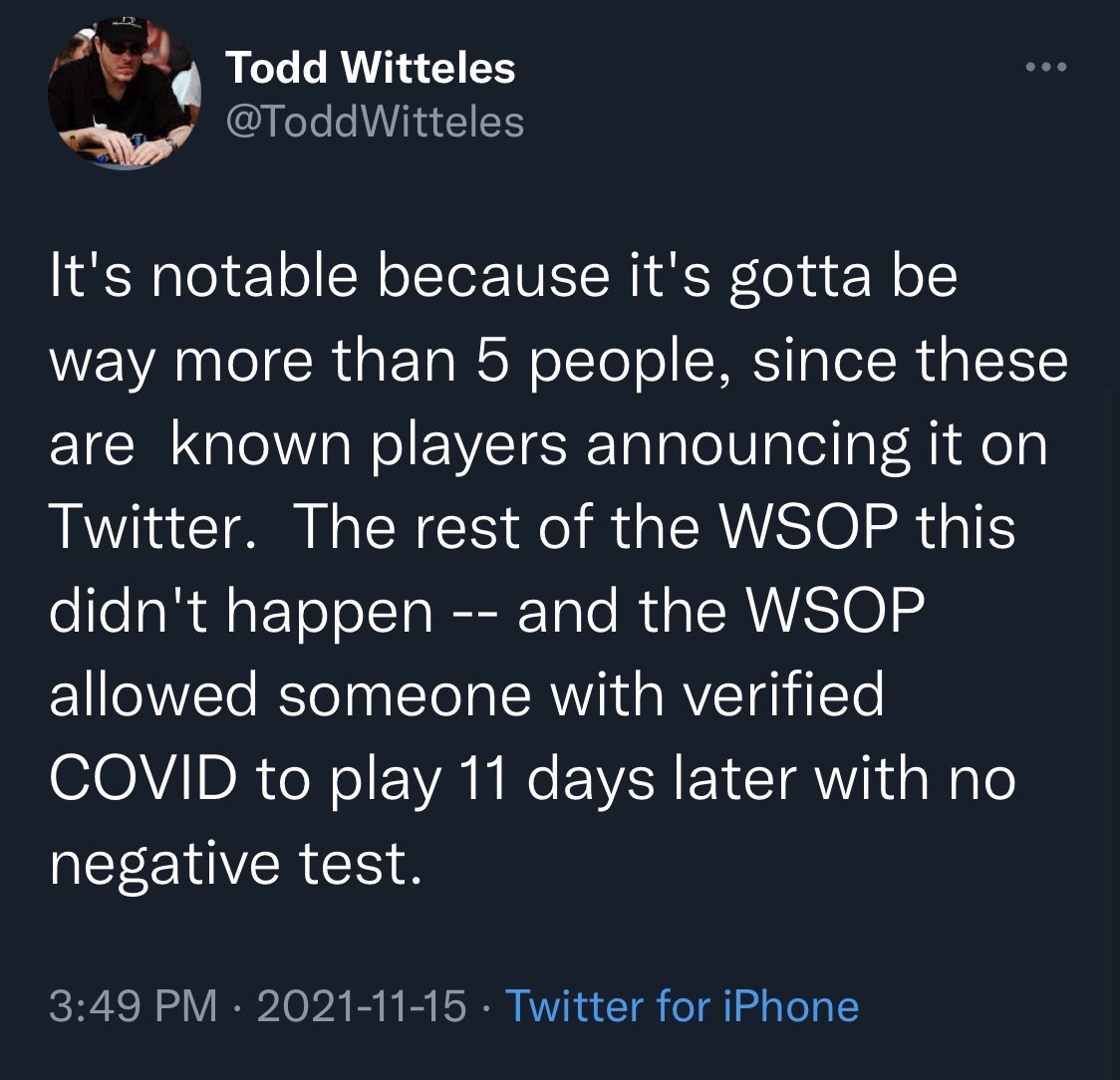 Another screenshot shows him name Kade directly and states that she played 11 days after testing positive without subsequently providing a negative test. 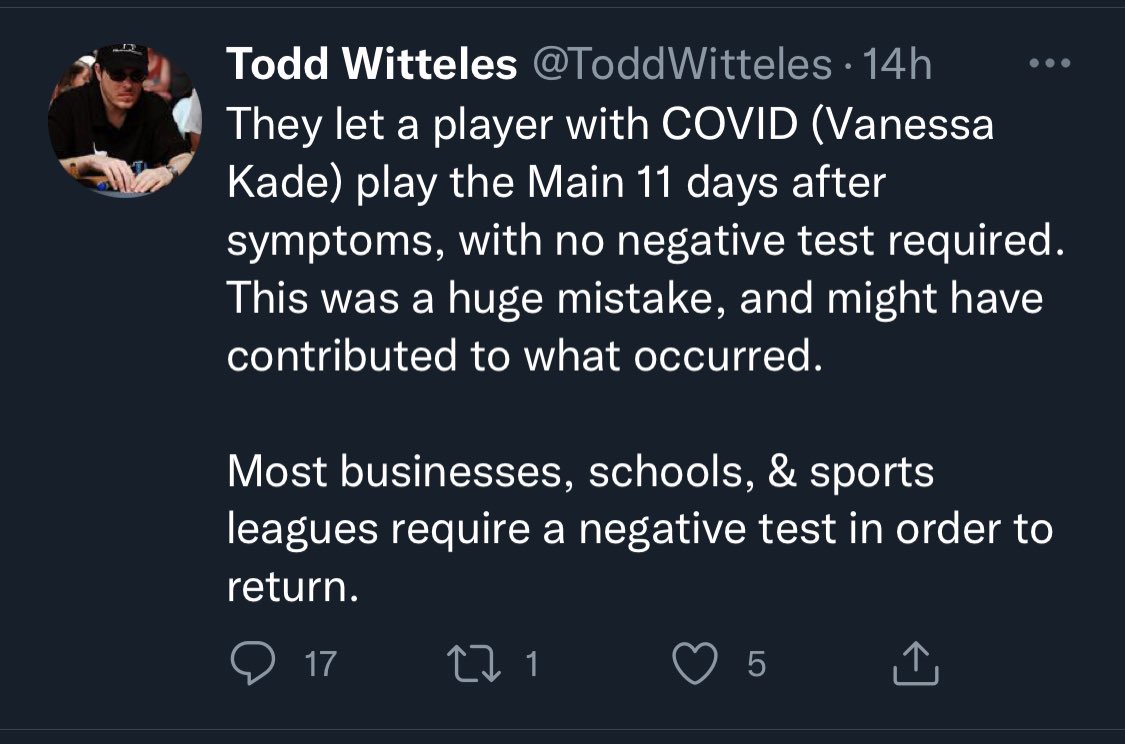 Given that the original tweet is no longer available, there’s a chance the screenshots have been doctored. But conversely, there’s no obvious evidence to suggest this is the case. Regardless of whether or not the above-mentioned Tweets show the genesis of the argument, Kade was irked by whatever was said.

I tested negative, got checked out by a doctor, AND WSOP’s EMTs. I’m literally the only one who voluntarily came forward to protect others despite the personal cost.

Why would I ever do that and then turn around go back if it’s not safe. https://t.co/bGyq1vUjSI

She tweeted that Witteles made “ridiculous” assumptions and pointed out that she was one of the first players to inform people she’d tested positive for COVID-19. Kade has been the subject of previous attacks on social media and described the latest accusations as a “witch hunt.”

Kade fights back over COVID accusations

The threat of legal action from Kade has calmed the situation somewhat. However, she has made it clear that her actions were not only within the rules, but “above and beyond” what was required.

Dunno what his problem is, but this isn’t the first time.

Tuned into one of his podcasts where he was spouting some shit that was slanderous and provably incorrect because he was too lazy to properly research the topic.

One more time & I’ll be talking to a lawyer @ToddWitteles

Kade isn’t 100% certain when she caught COVID, but she believes it was at some point in late October before Event #51. She quickly self-isolated in her hotel room, took a test to confirm her symptoms were indeed COVID-19, and informed the poker community.

She urged anyone she’d been in contact with to get a test and spent over a week alone in her room recovering. She returned to the WSOP after testing negative multiple times. Kade also took the extra precaution of keeping her mask on, even when she was posing for pictures.

And, as the picture below shows, the WSOP has taken every precaution possible to make sure people are safe. 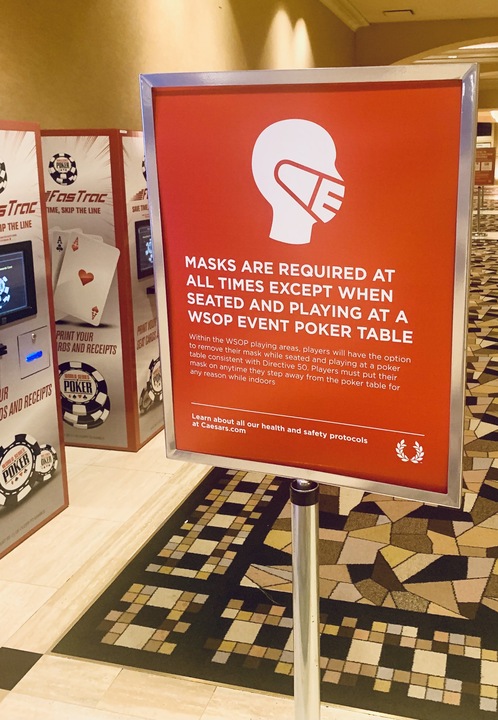 A warning sign at the WSOP. (Image: Chris Wallace)

Witteles has continued to tweet about the situation today, but his timeline of events has changed to someone playing in the Main Event eight days after testing positive, rather than 11.

Only contagious the first week, y’all.

That’s why sports leagues, nearly all schools, and most workplaces require a negative test to come back after a positive COVID diagnosis.

She tested positive, played Main 8 days later, and somehow forgot to tell us about her negative test. pic.twitter.com/AklsduIn0N

The chances of someone catching COVID-19 at this year’s WSOP were always high. Even with multiple safety precautions in place, people have still tested positive in all walks of life. For example, despite strict testing procedures, two people caught COVID on the set of Russell Crowe’s new poker movie.

If a COVID outbreak can happen on a movie set where people are wearing masks, social distancing, and taking multiple tests each day, then it’s almost impossible to keep it out of the WSOP. The positive in all of this — if there is one — is that Kade recovered and, so far, no one has been seriously ill, including Nick Schulman, who tested positive this week.

However, that will come as little consolation to Kade who feels victimized for something she has no control over.