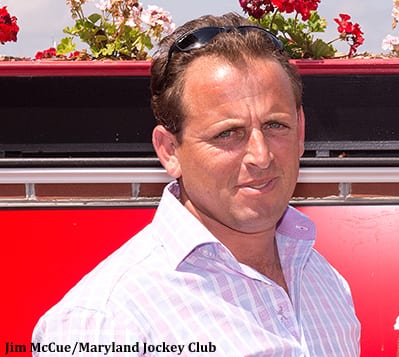 Owner/trainer Juan Carlos Vazquez, who was recently handed a suspension by Pennsylvania officials running into 2025, is appealing that ruling but will not be permitted to train while he awaits the outcome of his appeal.

On July 7, stewards issued a ruling citing Vazquez for violating the commission’s regulations against animal cruelty in the case  of Shining Colors. The 5-year-old mare was shipped by Vazquez from Belmont to Parx despite being in poor condition due to chronic laminitis. Upon her arrival at Parx, veterinarians determined the only humane option was euthanasia.

The July 7 ruling suspends Vazquez through Jan. 26, 2025 because that is when his current license there would normally be up for renewal.

At the time of Shining Colors’ death, Vazquez was already in the process of appealing two suspensions for drug positives from races held in 2021 and was given a stay in those cases, allowing him to continue operating. He requested a stay in this case too, but Thomas Chuckas, director for the Bureau of Thoroughbred Racing at the Pennsylvania Horse Racing Commission, denied that request.

In a ruling dated July 14, Chuckas wrote that in Vazquez’s July 11 request for supersedeas that Vazquez “failed to make any showing, let alone a strong showing, that he is likely to prevail on the merits of his appeal” which is one of the guidelines given to the executive director when considering a request for a stay, among other legal issues.

In evidence given at the stewards’ hearing into the horse’s death, Chuckas wrote that “an independent veterinarian conducted a blind review of the necropsy report and testified that he could not believe Shining Colors actually shipped on a trailer and that someone would have known about the severity and chronicity of Shining Colors’ lameness. In his professional medical opinion there was no justification for the horse traveling in her condition and considered it negligent and inhumane to do so.”

In November 2021, Vazquez trainee Ekhtibaar shipped in to run at Belmont Park and was discovered dead in the van at Gate 6. According to the New York State Gaming Commission’s database, the cause of death remains unknown.

Vazquez has a lengthy violation history, with 125 records relating to violations in the database ThoroughbredRulings.com dating back to 2006, although it is important to note that some violations generate multiple records in this database if stewards issue subsequent rulings rescinding or modifying previous ones. Track management at Delaware Park and Laurel Park banned Vazquez from those properties in 2015.

Vazquez had two runners entered on the opening card at Saratoga Race Course July 14. As of publication, those two horses were still entered, according to Equibase.