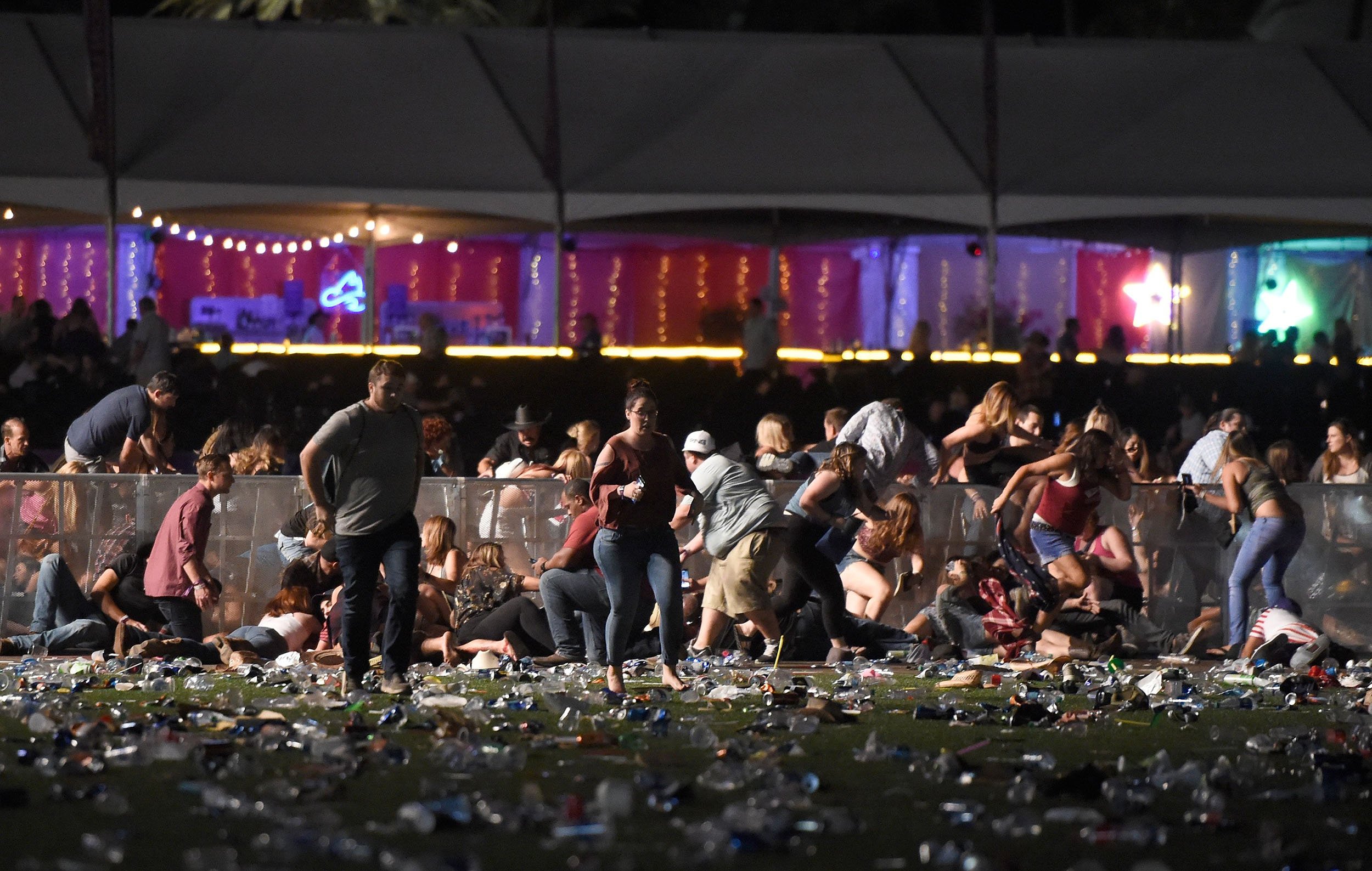 Las Vegas’ 2017 historic mass shooting led to some changes in casino-hotel security at many larger properties. Recommendations have surfaced in the five years since the horrific tragedy. Saturday marks its fifth anniversary.

Concertgoers run from the 2017 Harvest country music festival in Las Vegas. The shooter was perched at the Mandalay Bay. (Image: David Becker/Getty Images)

Previously, he was privacy officer at the Southern Nevada Counter Terrorism Center, and was security director at Harrah’s Las Vegas and The Flamingo Hotel & Casino.

Now, hotel security staff will identify contents of large or bulk baggage, he said. Also, if a “do not disturb” sign remains on a door for more than a day, security guards may enter a hotel room to check out the situation, Burns added.

In addition, prompted by broken windows seen in the mass shooting five years ago, broken windows now are more quickly identified, Burns said. Windows are also numbered making it easier to find them.

Has Anything Really Changed?

But Robert Jarvis, a law professor at Florida’s Nova Southeastern University’s Shepard College of Law, claims that since the 2017 mass shooting, “nothing has changed.” In fact, mass casualty events continue to be seen throughout the US.

Indeed, these incidents, once so rare, now are so common that we almost take it for granted that the next one is just around the corner,” he told Casino.org. Jarvis counts at least 10 more of these type of deadly incidents in five years since the Harvest Music festival tragedy, though Las Vegas’ shooting spree remains the most critical.

“Can we solve this problem so that, for example, school children do not have to participate in active shooter drills and their parents do not have to worry whether they will come home,” Jarvis asked. “I would like to think so, but I am highly skeptical.”

Two years after the shooting, in 2019, the Las Vegas Metropolitan Police Department (LVMPD) released a detailed self-assessment which provided an after-action review on the incident and the department’s response.

Among the 93 findings in the 158-page document is the need to secure high-rise buildings overlooking open air crowds. That describes MGM Resorts’ Mandalay Bay hotel, from where, on the 32nd-floor, shooter Stephen Paddock repeatedly fired at the concertgoers below.

Stephen Paddock, pictured above. He shot hundreds of people in Las Vegas in a 2017 massacre. (Image: NBC News)

Also, the report urged that more officers carrying rifles need to be present to neutralize a shooter who is situated in a high location, like Paddock.

In addition, there needs to be prior and ongoing planning and training with other nearby police, fire, health, and coroner teams. Responding officers also must be able to take off reflective vests to lessen the risk they will be a target for the shooter, the review said.

The report, as recounted by the Associated Press, also recommended that in the future, large-scale public events should be staffed by an increased number of paramedics. Trauma kits should be readily available, too.

Paddock, 64, fatally shot himself before officers reached his room. Officials never discovered his motive for killing or wounding hundreds of victims who were attending an outdoor concert.

Based on an earlier LVMPD review, one Metro officer, Cordell Hendrex, was fired from the department based on his response. He hesitated to react to gunfire while he was in a hallway one floor below the shooter. But after reconsideration, Hendrex was reinstated to his post.